[smartads] This province make 17 of 80 that I have presented to you.  Although there is a lot of history in the Philippines, this Province seems to have more than it’s share.

Bulacan (Filipino: Bulakan) (PSGC: 031400000; ISO: PH-BUL), officially called the Province of Bulacan (or Lalawigan ng Bulakan in Filipino) or simply Bulacan Province, is a first class province of the Republic of the Philippines located in the Central Luzon Region (Region 3) in the island of Luzon, north of Manila (the nation’s capital), and part of the Metro Luzon Urban Beltway Super Region. Bulacan was established 15 August 1578.

It has 569 barangays from 21 municipalities and 3 component cities (Malolos, the capital city; Meycauayan; and San Jose del Monte). Bulacan is located immediately north of Metro Manila. Bordering Bulacan are the provinces of Pampanga to the west, Nueva Ecija to the north, Aurora and Quezon to the east, and Metro Manila and Rizal to the south. Bulacan also lies on the north-eastern shore of Manila Bay.

That means that sometime during the rest of this morning, while I’m sleeping, this website will exceed 1,000,000 hits.  I wish I could be up to see it, but I ready for bed.  It has taken just over a year to get to 1,000,000, but I expect the second million to happen in about 5 months.  Maybe even sooner if we start getting more readers, or if I can find more interesting articles to put on here.  However long it takes, thanks a lot y’all for checking out my blog.  I hope the other blog I started gets to be this popular too.

I wasted most of the morning doing nothing, and it was great.

I did some thinking about what I need to do with this next check to get us back on track.  I’ve got a lot of things in my head about it, but I have yet to write it all down to be sure it all comes out okay.  Whatever the case, we will be making progress, and that’s the important thing as this time.

My goal is to have everything back to normal beginning in November.  After that it should be pretty smooth sailing, there will are still some rough waters to maneuver, but they will all be small waves by then.  By the time March rolls around we should owe nothing to anyone.   Everything will belong to us, except the Nissan.  That will be paid off in June 2013.  We want to be in Texas in March and still hope to be, but I really don’t see it happening until at least July next year.

Does anyone know if you can file for social security benefits over the Internet?  Lita needs to file, not me.

At around 4:45pm I saw a little girl and a little boy across the street in front of the Ciriaco Hotel, having a hair pulling fight.  It started out playing, but got a little serious soon.  The girl won that fight and she had less hair to pull.  At 4:56pm Chatty arrived home from school.

I think that some of the first English words the children learn here are: “Hey” “Joe” and “You”.  Their first full sentence is: “What’s your name”?  I hear this all the time from the kids walking by.  I got to where, if they sound respectful, I just tell them my name is Uncle.  If they say “Hey” or “Hey Joe”, I ignore them or if they sound rude, I ignore them.

Ado just showed up with Cathy and the kids, including Joshua.  There were probably at Judith’s house after all the kids got out of school.

Useless Knowledge:  In Saudi Arabia there are solar-powered pay phones in the desert.

I don’t remember if I mentioned it or not, but Mar went to Cebu on Tuesday and I think he either came back today or will tomorrow.  He is going to look for some of the Tabasco sauce, steak sauce and BBQ sauce that I have been bugging Lita about for these so many months.  He said he wouldn’t be able to get too many because he doesn’t have much money, but if he only gets 2 bottles of each, that would be enough to last until the beginning of November, when I will be going back to Tacloban.  I know I’ll get to go then, even though I keep saying I am, and I don’t.  I will then because we will be going back to Tambis for All Saints Day, just like last year.  That’s the last time I was there.  That’s another thing that me controlling the funds is going to correct.

The Pepsi mobile we have has a talking backup warning on it.  It says, “Attention!  This car is backing up”  It just keeps repeating that over and over as long as it is in reverse.  Sometimes when I’m bored I will say that line when the other vehicles are backing up.  There is also a Pepsi cycle here.  I need to get a picture of that for y’all too.

I made some more spaghetti today, the last of it.  I didn’t really have anything to go with it so I put my last hunk of cheese in it to melt.  It was okay, but not as good as the last batch of spaghetti I made.  I’ve already made plans for the leftovers tomorrow.  Emie bought a duck and I guess they are fixing to kill it to eat it.  I’m not squeamish or anything like that but I don’t like to watch such things.  First of all, I don’t eat duck and second, I don’t like watching a living thing die, if I can help it.  When I eat meat I like mine already dead and processed before I even see it.

I was expecting Jay to be home before 7:00pm, but he didn’t show until around 8:00pm.  He told Lita why he was late, but none of the information was passed on to me.

One thing you see a lot of around here are the pajak-pajak drivers drafting off each other.  It’s very common to see two riders, sometimes three, one behind the other going down the street with their wheels almost touching.

The Philippines has some strange looking vehicles.  I’m pretty sure that as long as it has a motor and wheels, a Filipino will drive it.

When/If they finally do get a mall built around here, I’m going to be stocking up on all the drinks that I like.  Sometimes in the middle of the night I get thirsty and I don’t like to drink water here that is not the mineral water.  I drink too many Mountain Dews, but that is just about all I get.  Soon I will be getting back to making tea and lemonade.  Neither are quite the same without ice, but it’s drinkable and it’s different. Actually I’m pretty sure that starting in November, I will be ordering a case of water from Titing every 2-3 weeks, depending on how fast I drink it.  He doesn’t seem to be able to get the 1 liter bottles anymore, so I’ll have to get the 1/2 liter ones.  It’s okay, I’ll just drink twice as many.

Well that’s it, the end of the day.  Thanks for sticking around and be sure to let me know if you have any suggestions for this website.  Also don’t forget that if you are planning a visit in the Philippines, shoot me an e-mail and let’s see if we can work out a good deal for you.  It’s free to try, so there is nothing to lose.

Useless Knowledge:  The name of the first space shuttle was the Constitution. Pres. Gerald Ford changed it to Enterprise after receiving 100,000 letters from Star Trek fans. 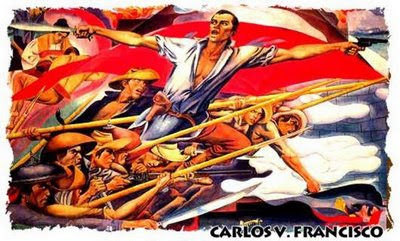 1896 – Some five days following the official discovery of the Katipunan, the revolutionary Philippine underground movement, Katipuneros arrive at the barn of Melchora Aquino for their hurried National Assembly, with Supremo Andres Bonifacio and members of the Supreme Council (Kataastaaang Kapulungan), heads of the supramunicipal (sangunian) and chapter (balangay) units of theKataastaasang, Kagalanggalangang Katipunan nang  manga Anak nang Bayan (KKK) in attendance; American colonial military historian John R. M. Taylor will later come to the conclusion that the Katipunan was the first national government of the Philippines, writing that Bonifacio turned the Katipunan “lodges into battalions, his grandmasters into captains, and the supreme council of the Katipunan” into a revolutionary body fighting for independence against colonial Spain; three days earlier, Bonifacio, along with his brotherly confidante and KKK Secretary Emilio Jacinto y Dizon, changed the Katipunan code from numeric to alphanumeric, and in five days’ time, will lead the Katipuneros in launching the Himagsikan’s general uprising against the enemy