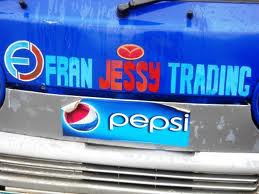 Before I get started with this post I like to point out the fact that the game links seem to be gone for good.  They did not appear on the last post Zine Entry #54 – Stories and Rumors Galore and I was even able to go back and copy/paste the 2 posts (Zine #52 & Zine #53) that had the problem to make that go away with renewed posts.  <toast> Here’s to them never returning.  I also added my other, not so big, blogs links on the front page.  I now have a total of 6 blogs, but 3 of them are just starting and don’t have many posts yet.  Check them out, see what you think.  I don’t know too many things, and one of my blogs proves that, but I try and I hope something clicks with someone somehow.

Okay, so at the end of the last post I believe I mentioned that since the Pepsi warehouse in Tacloban got wiped out, we have no one to supply us with Pepsi right now.  Well no one on a regular basis.  We get sporadic calls from places since they know we are looking and we are trying hard to fill the orders, but it isn’t easy.  The owners of FranJessy Trading (Titing & Neneng) have decided to open up a little bbq out front in addition to their bakeshop.  It’s doing pretty good, but not near the money that they were making with Pepsi obviously.  Lita was invited to join in, but she declined.  She did say that if anyone wanted the American style bbq that she could do that.  That would mean marinate time though. Once things get back on track with Pepsi, which will be soon we hope, Lita and Judith will take over the bbq.  Judith will mostly do the bbq and Lita wants to reopen the little store we had.  I think she will be limiting the inventory to the things that we now know will sell.  The things that we had a hard time keeping in stock before.

I’m trying to get Lita to also sell beer when she reopens the store, but I’m not sure she is convinced of that yet.  That for sure sells, even if it’s just to me (at cost).  It takes a special license for that, but other sari-sari stores around here have it, so it should not be that hard to get one.  Red Horse and San Miguel (both regular and light) will for sure be in the inventory.  Maybe we can get the Beer na beer and/or the Gold Eagle also.  I think it’s less expensive, but I don’t know how many people would actually buy it.  I’ve never tasted either of those last two, so I can not be a judge on that.  We’ll see.  We still have a few months probably before things develop with that.  People change their minds about every other gust of wind around here sometimes, so I don’t count those chickens until I hear and see them chirping.

At this point in time we had been approximately 125 1/2 hours without electricity.  Even the thought of how much tougher the people in Tacloban are having is starting not to ease the frustration.

Yesterday during that phony tsunami scare I heard that someone downtown got run over and killed in the panic, 1 lady had a miscarriage on the street and that some of the security at the stores left, leaving it open to vandals and they starting taking things, especially the rice.  That’s what I heard, who knows if it’s really true, but I wouldn’t doubt it.  I also found out that this same scenario played out in a town a little further north just the day before this one happen.  Seems to be someone spreading these rumors just for the purpose of stealing things during the chaos.  If so then I think they should be held responsible for the person that got killed and the miscarriage, if those two actually did happen.  Most likely nothing will be done though because it’s probably too hard to prove.

On Wednesday (Nov 13th) they set up a check point in front of our house around 6:30pm.  They said that they are checking for people bringing contraband in from Tacloban and selling it here.  There has been a lot of looting going on there in the wake of the typhoon.

Jun says that he will write a story about his experience during the typhoon, including him being neck deep in the water in his house.

We just hit the 156 hour mark with no power.  I have never had much confidence in Samelco and they have not done anything to make me change my mind during this crisis.  Although others tell me it takes time, I think they should of had a contingency plan set up for this scenario.  I mean why do they not have even one power plant on this island?  They should get one built here or have a quick way to reroute the power when a plant is out of commission.  It’s just good business sense.  I suppose when you are the only power company though, you can get away with whatever you feel like.

The place that we have been getting our ice is now non-operational.  I think their generator gave up on them.  We had to cook all the meat we had left in our freezer to keep it from going bad.  Luckily there really was not that much left.  I suppose that after it is gone though, I will be a vegetarian until we get our power back and get some more meat for the freezer.

More rumors today that the power will be restored on Saturday, this is Thursday.  There are so many rumors flying around now that I don’t bother to believe any of them.

Early, early this morning @0158 we made it to 168 hours.  Now for all of you smart people out there you might recognize that as being significant because 168 hours is equal to 1 week.  Who knows how many more days, or weeks, it will be before they finally figure it out.  Everyone around here knows the answer, but they are all different answers.

For the past couple of days I have resorted to buying bottle water at the Ciriaco because it is cold.  They have a huge generator.  They charge P50 for a bottle of water that you can get for P12 just about anywhere else, but anywhere else is not cold right now.  Today though even the Ciriaco ran out of bottled water.  I didn’t think I bought that many.  Since we still have not found a place to buy ice, I guess I will be doing without cold water or cold any kind of drink for awhile.  I suppose I could go to the Ciriaco and order one of their high priced meals.  I would get as many glasses of ice water as I wanted then.  But I’m not to that level of desperation yet.

Well as if it wasn’t crowded enough around here, we had 8 more people show up to stay here.  Oh, they are welcomed here, but this puts us at about our maximum capacity I think.  I guess I’ll have to explain all that to you in the next post though.