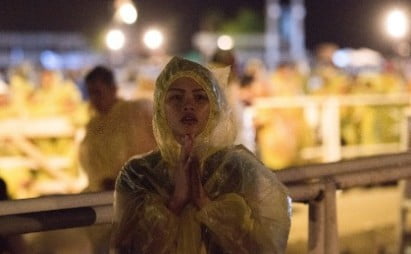 CATARMAN, Northern Samar — (UPDATE – 11:32 a.m.) Thousands of pilgrims from Northern Samar who had gone to Leyte to welcome Pope Francis when he visited on Saturday were trapped on their way home by floods triggered by tropical storm “Amang.”

Hundreds more from Luzon were stranded in Allen town after ferry services were suspended because of the storm.

Eddie Picardal, information officer of the provincial government, said the pilgrims were stranded in Lope de Vega town had to seek refuge at the church and the municipal hall.

Other pilgrims found themselves stuck in Calbayog City and had to sleep inside the buses ferrying them. These pilgrims were unlikely to continue on their way Sunday morning as landslides in Barangays Capakohan and Mag-ubay in Calbayog’s Oquendo district had closed the road leading to Northern Samar.

Karen Gajutos, a youth coordinator, said the Nothern Samar pilgrims had gone to Leyte in 50 buses, 37 other private vehicles, and an undetermined number of trucks.

As of this posting, Las Navas and Catubig remain underwater.

While no casualties have been reported, the PDRRMC said the floods sent 10,000 people fleeing their homes.

In Allen, hundreds of buses, trucks and private vehicles, many ferrying home pilgrims from Luzon, were stranded at the town port, acting Governor Eddie Picardal said.

They were unlikely to be able to board ferries on Sunday as Northern Samar remained under public storm warning Signal No. 2. Interisland ferry services are automatically suspended when the weather bureau raises Signal No. 1.

The provincial government has released 20 sacks of rice and six boxes of sardines for those stranded in Allen.

The NDRRMC said at least 12 domestic flights had been cancelled due to bad weather and, as of Saturday evening, 10,142 passengers, 973 rolling cargo, 69 sea vessels, and 26 motor bancas were stranded in different ports. (with a report from Jaime Sinapit, InterAksyon.com) 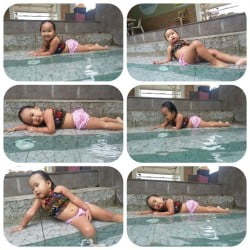