[smartads] Another adventure you can experience while on a MJ Tourist Service tour.  Do you have the guts to try this?  I doubt that I would do it, but you just never know.  This one looks like the guy is sitting down and not diving head first, so there is a better chance of me doing it.  Not too sure I trust those things to snap back like they are suppose to.  I hear it’s a super rush for those that go through with it.  I’d like to feel that spine-tickling rush running through me, wouldn’t you?  It’s all possible just call or e-mail us and we’ll set it up.  I might even try it the day that you are there.

3 Jan – I was up early today, at 0618.  I cooked my own breakfast today.  I cooked some onions, using Lita’s special seasoning and cracked the last 2 eggs in the refrigerator on top of them.  I’ve been eating a lot of onions lately, but I love cooked onions, especially fried onions.  I try not to use too much oil though, just enough to get the job done.  Even then before I eat it I put everything on a plate that has a couple of paper towels on it to soak up a lot of the oil that is still there. 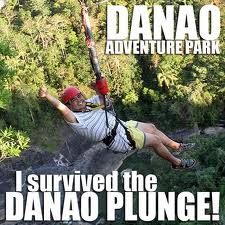 I tried early this morning to call an 800 number for my Internet, but no one ever answered.  I finally got through to Globe though and they said they would send someone over to fix it right away.  I’ll be dang if they didn’t do just that.  They were here in less than 30 minutes.  That sure surprised me.   What didn’t surprise me was the fact that 4 guys showed up and only 1 of them actually did any work.  I remember I explained all that in the 3 Jan post so I’ll just leave it at that.

I went downtown today to get my money to pay bills and go shopping, but I couldn’t get any money.  When I deposit a check, it takes 21 working days to clear.  Never mind that it clears my bank in Texas in 1 week.  I still have to wait an additional 2 weeks.  Well my 21 days were not up until the next day because of all the recent holidays.  So I had to go back home and wait until the 4th.  Before we went home though, Ado (driver) and Ramil was with me, I had Ado go by the Globe office to complain once again about my phone service.  Ramil was with me and the phone service is in his name, so I’m hoping that all this ‘crap’ I’ve been getting would end.  It didn’t work that way.  They had him fill out a form to ‘active’ the long distance and told him it’d be 24-48 hours to active.  Well that’s the same form that I filled out last month, and nothing was done, so I’ll wait and see what happens.

Think I’ll work on changing banks if I can get Lita to go to Metro Bank with me, I’ll change to them.  I pick them because I have to use my check card there anyway.  No other bank here accepts it anymore.  There were 3 of them when I arrived, our bank wasn’t one of them, but Metro Bank is the only one left accepting it.  The problem is that usually the line at the ATM is the longest ATM line in town.

When I went to the bank today (and didn’t get the money) I had to wait 23 minutes to get served.  Not too bad you say?  Well there were 3 tellers, but only 1 deals in dollars.  When I arrived only 1 of the 3 tellers had someone at their window…yep that’s right, the one that deals in dollars.  When he finally got done with that guy, he took a lot of time doing paperwork before calling me up to the counter.  Meanwhile the other 2 tellers are doing their paperwork, and even though they know how to do the dollars, they can’t help me.  All that just to find out I have to come back tomorrow.  I’m going to check out Metro Bank and if there service is even slightly better, don’t see how it could be much worse, I want to change banks.

The phone service, if they don’t fix that, I’m going to pull the phone out of the wall and bring it back to them.  I might just smash it against a wall in the Globe office.  This kind of service I never had to put up with in Texas because they work to keep your business since there are so many different phone services we can use.  Here I think only 2 are available in my area, and the other one is not near as good as this one, or so I hear from others.

I was so mad about the bank and the phone that I forgot that I could go by the Metro Bank ATM and get some money so I could pay the water bill.  It was already 1 day late, but I figured since it was due on Sunday, the 2nd, that paying it on Monday, the 3rd would be okay without incurring the P178 penalty.  I was wrong.  Seems that they were open a 1/2 day on Sunday, or so the lady at the counter said.

Anyway since I forgot to get the money from the ATM, and came all the way home, I had to tell Ado that we needed to go back downtown to Metro Bank.  When we arrived there I thought I got lucky because I didn’t see anyone in line.  Wrong again.  The line was on the side of the building.  I was #14 in line.  I don’t know if I’ve mentioned this before or not, but some people here must be very stupid.  When they get inside that ATM room, they take so long.  Some of them are in there like 10-15 minutes.  When I get in there, it takes me about 1 minute.    If they are doing full banking transactions they should be going inside the bank, no lines in there, and it’s air conditioned.

Something else about the lines they have here, or “falling in line” as they call it, is that they don’t always stand in the line.  Sometimes they just sit on the side or even across the street and wait for their turn to come up.  That’s not too bad, but then sometimes when they come up, there are now 2 of them.  Also sometimes when they are in line in front of you, several other people show up to talk to them and they just kind of merge into the line.  The people behind them don’t say anything because, I guess, that’s the way things are.  Me, I don’t say anything because for all I know those people were holding the line for them.  Sometimes Ramil will stand in line for me, so I don’t have to do it.  He just calls me up right before it is my turn, but he goes to the truck after that, he’s not staying or letting me cut in front.

The bench we had in our “living room” is now here in the computer room.  Lita wanted to make room for the bed that Arnel is suppose to make for Susan.  Susan is suppose to sleep here at night and that way she will be up and ready to work early.

I said I was going to the gym starting today, the 3rd, but I didn’t go.  I do have a good reason though.  In fact I have 2 good reasons.  First because I didn’t bring any tennis shoes to work out in.  All I have here are flip flops.  Can’t work out in flip flops.  Second is because, even if I did have the shoes, they would fit because my right foot is still swollen from that gout I had.  It’s taking longer than normal to go down, but at least it doesn’t hurt and I can walk just fine.  I’ll see if I can buy some shoes here, but I doubt it.  I’ll probably have to wait until we go to Korea in May to find a pair that is big enough to fit me.

Useless Knowledge: A booger is made of a piece of dried nasal mucus or snot. Mucus is the thin, slippery material that is found inside your nose.

Useless Knowledge: Record label after record label signed the Sex Pistols then paid them to leave the label. In four months’ time the recording industry paid the band #350,000 to go away.  (I guess that’s pounds (London), not sure).

The first Filipino act to land a top hit on the US Billboard Hot 100 chart in the 1960s was the group Rocky Fellers of Manila.

Sugar Pie deSanto (father was from the Philippines), The Artist Formerly Known as Prince (according to the October 1984 article “Prince in Exile” by Scott Isler in the magazine Musician), Jaya,Foxy Brown and Enrique Iglesias followed.

Pure Filipinos who made success in minor charts were Jocelyn Enriquez aka Oriental Madonna, Buffy, Pinay and (Ella May) Saison.

Latina-American pop star Christina Aguilera lost to Filipina vocalist Josephine Roberto aka Banig during the International Star Search years ago. In a mid-1999 MTV chat, she said that competing against someone of Banig’s age was “not fair.”

Besides gracing fashion magazine covers, this international supermodel from Manila had walked the runways since the 1970s for all the major designers, like Calvin Klein, Chanel, Christian Dior, Christian Lacroix, Donna Karan,Gianni Versace and Yves Saint Laurent – Anna Bayle.

Who is the personal physician of United States Pres. William Clinton? Elea! nor “Connie” Concepcion Mariano, a Filipina doctor who was the youngest captain in the US Navy.

The first Filipino-American in US Congress was Virginia Rep. Robert Cortez-Scott, a Harvard alumnus.