[smartads] Can you imagine yourself on a beach like this?  We can bring your imagination to life at MJ Tourist Service.  Just contact a representative through the MJTS Flyer link on the front page and we’ll get to surfing for great deals for you and yours to here and to other places around the beautiful islands of the Philippines.  It doesn’t cost a thing to discuss your needs.  Just e-mail a representative and let’s make a deal, it may be less expensive than you think.

4 Jan – Still getting caught up on events from my power outage, but I’m getting there.

When I got up at 0758 this morning, I made pancakes almost as soon as I was up.  Anna Pearl, Crystal and I all had pancakes.  Lita was at the market, so she didn’t get any. 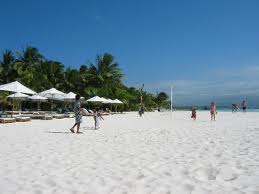 We actually got an electric bill today.  It’s not like last time when we had to dang near beg to get one.  We used 679kw of electricity this past month.  I don’t know if that is a lot, but the electric use was total came out to P2355.38.  The rate for usage is 3.4689.  Now here is the reason why everyone needs competition in business.  Even though our bill is only slightly over P2355, the total bill due for this month (nothing past due) is P6228.68.  No, I’m not kidding.  There are so many different taxes, fees and other things added on to the bill, it almost triples the payment.  Now me being an ignorant American, I decided that I need to ask about these fees.  So later on when I go pay the bill, I will inquire about them.  Oh, and another thing about the bill.  We received the bill on 4 Jan, the due date was 5 Jan and the cut off date was 8 Jan.  So next time you complain about your electric bill, consider all this.

That cat finally showed up after being missing for the past 2 days.  He showed up limping.  He was probably fighting again, he likes to do that, but I think he never wins.

I may have touched on this already, but I’m too lazy right now to check the previous posts, but J and the 2 girls that he is bringing (still only 2 that I know of) be arriving here until Friday, I’m told.  Everything moving much slower in Tambis due to the flooding and landslides.  I personally wonder why, since they are coming here anyway, they didn’t just leave when all this flooding first started.  I let people do what they want though.  I rarely interfere unless it is a safety issue, if they ask my opinion, or I’m pissed off.  Of course this information has been changing almost daily, so as I said earlier, I’ll know when they get here when I see them.

Okay it’s 1:00pm now.  I’m getting ready to go downtown to get my money (that I couldn’t get yesterday) so I can pay a couple of bills and by some groceries.  When I finally got inside the bank it was, by their clock, 1:44pm.  Again there are 3 tellers and the only 1 that does dollars was busy.  This time, however; he called me up after only about 2 minutes of waiting.  I’m thinking to myself, alright maybe this bank is not so bad.  Wrong!  Wrong!  Wrong!  He checked the system for the money…no it was there…but as he was doing all the paperwork, he ran into a problem.  He asked the lady teller on his right, he asked the lady teller on his left, he called another lady over and finally he called a Supervisor over.  No one could figure out what the problem was.  In the meantime the teller on his left serviced 3 customers, who were not even in the bank when I arrived and the teller on his right serviced 2 customers, also not in the bank when I arrived.  They are all talking in Tagalog  trying to figure out what the problem is, it’s mind boggling evidently.  I know just enough Tagalog to figure out what they finally figured out the problem to be.  When he turned to talk to me, he told me it was a computer problem.  I’m thinking to myself that I heard what the problem is and why is this guy lying to me?  It turns out that he input a code wrong on a different screen and no one noticed it until they made him start over.  He was suppose to input either “225 or 255” and he put the opposite.  I’m also thinking, how can it be a computer problem when the other 2 tellers are on the same system and they are doing transactions fine.  Maybe he could have had a terminal problem, but I doubt it because he was inputting things.  It’s just that the final results were not coming out correctly.  Final analysis is that I was there for 32 minutes for a 5 minute transaction.

Hiding from the camera

After I finally got my money I needed to pay the Internet bill.  Why I’m paying it is beyond me.  I’ve had so many outages recently, they should be paying me.  They also control my phone service, but I wont’ get into that again.  When I showed up at the Globe office I asked why my bill was so low, not complaining of course, just asking.  She explained to me that it was because of that unlimited WIFI that I had taken off the bill (which I didn’t really have to start with).  When all the adjustments and payments were factored in, my P1295 monthly bill turned into a P408 bill for that month.  So far it’s the only good news I’ve had, bill wise, since we’ve been here.

After paying that bill I needed to stop at JustMar to get a few groceries.  I bought pancake mix, corn (Del Monte), sunflower oil, toilet paper, paper towels and a few other things.  I couldn’t find any Tabasco sauce today so I just got a P17 bottle of “Super Hot Sauce”.  I wanted to buy some air freshener, but the closest thing I could find was Lysol spray and it was almost $7 for 1 can.  No way I was buying that.  I also could not find any milk.  I got everything in the dinky little basket and went up to the counter.  I’m the only American around in the store, so I’m getting all the stares.  After I paid almost P1200 for what I had, I grabbed the box and was heading out the door when I heard someone say that I must be a bakla (not sure of spelling), but it means “gay”.  I just ignored them.  Weak minded people.

Now it is time to pay the electric bill.  I’ve been looking forward to paying this all day.  When we arrived there, I was lucky because there was no line.  Last time I was there with Ramil there was a long line.  There is only 2 windows open, but only 1 customer, so I get to go right up to the window.  After the lady told me how much the bill was, I asked about all those extra charges.  She had to ask her Supervisor then she told me that the only recurring charges are these and these (she marked them with a red pen on my bill).  I asked, so all these other things are a one time thing then, right?  Again she asked her Supervisor.  Then she told me “Yes”, only one time.  I told her that I paid all these charges last month, and I showed her the big 4 months worth of electric bill.  She was kind of surprised to see such a big bill, so I explained that it was for 4 months.  She said okay, but if I wanted to discuss my bill in detail, I would have to go to the Accounting Department inside.  So I did.  I paid the P6228.68 and went inside.  When I arrived, the nice lady at the Information Desk, escorted me to the Accounting.  The lady there immediately directed me to her Supervisor, sitting right behind her.  I think the first lady didn’t speak English very well, so that is why she re-directed me so fast.  After I explained everything I was concerned about to the Supervisor, she told me that those charges were ALL monthly.  Evidently all that extra money we pay is used by them to pay other people for some reason.  I couldn’t really understand everything she was trying to explain, but I got the gist of it.  I told her that the lady up front just told me that I only had to pay most of this charges one time.  She said that that is not so, they have to be paid every month.  I guess I’ll find out on the next month, who was right.  I’m hoping that the lady at the window was right, but I’d bet money on the lady in Accounting being right.  I asked about the new electrical plant being built.  Would it mean less brown outs?  Is it even their company or another company?  Well it should mean less brown outs and it is still their company.  I was hoping for a different company to get a little rivalry going between the 2 companies, but alas, that is not meant to be yet.  I just came back home resigned to the fact that if I want to live here, I have to play by their rules, at least for now.

This road is now under water due to flooding.

Children crossing the river in Tambis.

Useless Knowledge: In the 1400s, a popular form of shoes called “crakows” sported extremely long toes. The length of the toes, which could measure over 20 inches, was an indication of the social status of the person wearing them.

Useless Knowledge: In 1664, Maryland passed the first law forbidding English women to marry black men. Any white woman marrying a black slave would herself become a slave until her husband died. However, the edict never declared what would happen to any white guy who married a black woman. Hmm…

Distinguished British traveler-writer A. Henry Savage Landor, thrilled upon seeing a Bicol landmark in 1903, wrote: “Mayon is the most beautiful mountain I have ever seen, the world-renowned Fujiyama (Mt.Fuji) of Japan sinking into perfect insignificance by comparison.”

Mayon volcano has the world’s most perfect cone.

Filipinos had their first taste of Mexican chili and corn during the Manila-Acapulco galleon trade (1564-1815). In return, Mexico’s people had their initial taste of tamarind, Manila mango and a Filipino banana called racatan or lakatan.

Founded in 1595 by Spaniards, the University of San Carlos in Cebu City, Philippines is older than Harvard and is the oldest university in Asia. University of Santo Tomas in Manila,established in 1611, is Asia’s second oldest.

Who’s the Filipina senator popular for her colorful jargon, delivered in a mile-a-minute speed and in a weird Harvard-meets-Ilonggo accent? Atty. Miriam Defensor-Santiago.

Filipino writer Jose Rizal could read and write at age 2, and grew up to speak more than 20 languages, including Latin, Greek, German, French and Chinese. What were his last words? “Consummatumsst!”(“It is done!”)

“What’s still most impressive to me about the Philippines is the friendliness of the people, their sense of humor…,” wrote Honolulu journalist John Griffin in a 1998 visit to Manila.