When I left off the last post we had already returned from our vacation and we were taking a nap.  I have some things for the rest of the day, plus some other things that I neglected to say in the previous post.  The 10th and 11th of May are not filled with events because those were my sick days.  The 12th has a lot of information so I’ll probably be going through the 11th with this post and pick up tomorrow with the 12th.

Useless Knowledge: Before bath tissue was introduced in the United States in perforated form in 1884, a number of outhouses in America were stocked with dried leaves.  (Must have been before fire ants)

9 May (cont’d) – Around 0700 I tried to get online, but I couldn’t.  The modem looked like it was working correctly, but the connection could not be made.  I also did not have a dial tone on the phone.  In addition to all that, our water is not working either.  Seems like every time we leave for any extended amount of time, something bad happens.  We were only gone for 2 days, so I wonder what will happen when we are gone for 3 or 4 months when we go to Texas?  I shudder to think about it <shudder, shudder>.

Finally around 7:30pm the water started coming back.  It is only trickling now, but at least it is back.  Still no Internet connection though.  Also when I checked at 8:30pm, no Internet and no phone. 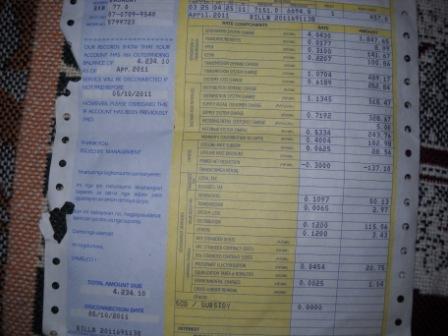 Around about 9:30pm it starting pouring down rain.  That sure wasn’t going to help my Internet or phone connections.

Finally at 10:33pm the Internet was up, but it was extra slow.  Phone is working too.  I figured it was too late to try to do the post tonight, besides, I was falling asleep sitting here just for that little while I was here.  Guess I didn’t sleep long enough after we got back from Hong Kong.

Look at the shape of the 2 terminals at Hong Kong.  Don’t they look to be in the shape of an airplane, or is my imagination working overtime?  I wonder if they did that on purpose?

10 May – I caught a cold somewhere along the trip and I don’t feel real great right now.  There is a lot of sneezing and running nose things going on.

Today was the day I received the electric bill in the feature photo at the top.  Do you see the cutoff date on the bill?  It’s right below the “Total Amount Due” on the left side, at the bottom.  I received the bill on 10 May and the cutoff is 10 May.  That is typical of the bills I usually receive around here.

Paul came by again today.  He came by to say good-bye because he is leaving tomorrow.  He only stayed for 3 days.  I don’t think I could do something like that, unless of course he is not flying all the way back to the UK.  If he is working someplace within the Pacific, and I’m thinking he is, then that’s not too bad.  Heck Lita and I just did such a trip.  He didn’t mention when/if he would be returning.  I guess that depends on how his visit with his girlfriend went.  From the little time that I spent with him, he seemed like a pretty decent guy, so I hope he does come back again.

I was playing Plants vs. Zombies again today.  I don’t need the Internet for that.  I found out that the points you get for collecting the coins, stops when it gets to 999,990.  I was hoping for a million slot to appear, but no such luck.  So I said that all I had to do was just use some of the money and then I’d have room to put more in.  Well I’ve already bought everything there is to buy so all I have left is to build my Tree of Knowledge taller.  Turns out that I’ve already maxed out the knowledge too.  So the only thing I have left to do with the money is to grow the tree taller.  It will never give me anything else, but it will still grow taller.  I wonder what the max on growing the tree is?  Probably 9,999 feet.

Here’s the other picture of the large screen TV at HKIA that I told you I had.

Useless Knowledge: The boxing ring is obviously square, but it used to be a rounded-off area, and the name stuck. (It’s a square with nuts in it)

Remember I told you that I didn’t have much information written down for the last couple of days because I was sick.  I am still just happy to be home.  All that being said, that will make this a short post, but it does catch me up a few days and I will continue to try to get some days in.  I have quite a lot of information written down for 12 May, so next post will probably be no more than 12 and 13 May, maybe only 12 May depending on my ramblings.

I went downtown today to get the money to pay the electric bill.  Although the cutoff date is listed as 10 May, I understand that sometimes it take up to 4 days for them to actually turn it off.  It’s still on right now, so, so far so good.  When I went to pay the bill, the line was long again.  Nope, ain’t waiting.  Ado brought me back home and Lita gave the money to J so he could go wait in line.  It actually didn’t take him very long.  I was surprised when he was back in about 40 minutes.

Probably new life for the Blue Gazebo Cafe.  In fact it’s even a better probability than it was before.  It seems that Judith will have to be moving out of here house she is renting at the end of her current lease, which is this December.  Judith has the very nice Joyous Eatery that she runs there and she will be moving over here when she has to move.  Her and Lita will be combining to bring the Blue Gazebo to life.  Judith says she likes the name, so that shouldn’t change.  The lady that owns the place where Judith is living now plans to put apartments there, I believe.  She’s been thinking about it for awhile, but with the recent build up around here, the new mall coming close to there and the Philippines trying to make the island of Samar the #2 vacation area of the Philippines, I guess she figured now was a good time.

Well that’s it for this post.  I’ll try to do another one tomorrow and everyday until I get caught back up.  I’m hoping that once I get caught up, I will stay that way. 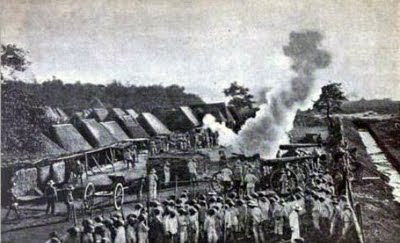 1897 – A day after Emilio Aguinaldo y Famy sealed tightly his revolutionary power grab by the elimination of Kataastaasang Kagalanggalangang Katipunan nang manga Anak nang Bayan Supremo Andres Bonifacio y de Castro, the former loses pitched battles against the Spanish colonial forces under Governor-General Primo de Rivera in Indang, Cavite, enabling the enemy colonizers to recapture a number of upland towns including Mendez, Nunez, Alfonso, Baileng, Magallanes, and Marandon, where the mountain site of Bonifacio’s killing; Apolinario Mabini y Maranan, Aguinaldo’s future trusted adviser and Prime Minister, will write decades later that Aguinaldo’s power-grab against and assassination-cum-execution of Supremo Bonifacio was a tragedy that “smothered the enthusiasm for the revolutionary cause,” with many revolutionaries from “Manila, Laguna, and Batangas, who were fighting for the province (of Cavite)” being demoralized and subsequently quit.