[smartads] I found this old video on my computer and I thought I’d share it with you.  It is Crystal Princess at about 2 years old dancing at the karaoke place at Malajog Beach.  She reminded me of a little Filipino Shirley Temple.  The little girl sitting down in the blue on the right, next to Juvic,  is Chatty.  She wasn’t so camera shy back then.  The little boy with the microphone, singing close to the end, I think is Khan, it’s hard to tell.  I checked the link and it did work for me, but it took a couple of minutes before it started playing so you may have to have a little patience.  After you press the “Crystal Dancing” above, you may have to press 2 more  “Crystal Dancing” too.  I did.  Let me know if it works for you or not.  If not, I’ll do my best to make it available to you, somehow. 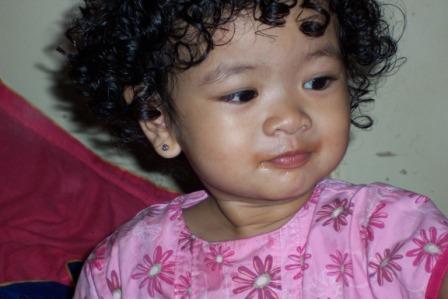 This morning was more like a normal morning.  It was raining and there were no sexy legs in front of my eyes.  It was normal, but not near as nice.  We had a brownout today at 12:20pm.  The phones went out also.  Since the battery backup portion of my UPS (Uninterrupted Power Source) is not working, my computer just clicked off instead of allowing me to bring it down in a orderly fashion.  I’ve never looked on the inside of that UPS, is there an actual battery in there that maybe just needs to be replaced?  I’ll try to remember to take a look after I close down the computer in a few hours, or before I turn it on in the morning.  I wonder if I can buy something like that, either a battery or another UPS, around here or maybe in Tacloban?

I was sitting in LolyKat, alone, and this little girl came up to the window to buy something.  She saw that I was the only one there, so she left without even trying to ask for anything.  I know it was because she was embarrassed about using English, but I wish they’d at least try.  Thankfully she came back a few minutes later with a couple of friends and they got the candy they wanted.

The electricity came back on at 6:20pm.  Exactly 6 hours after it went out.  That makes me think that it was on a timer or something.  It wasn’t a scheduled brownout, so we don’t know what was going on with that.

We need a new battery for the Nissan.  I hear Ado out there trying to start it now.  We are always having to push start it these days.  That’s one of the only 2 things I like on a standard better than an automatic, the push starting (the other is the better gas mileage in a standard).  Ado has already been down to recharge this battery twice, so I think getting a new one is going to have to be a priority for next payday.

I think another priority for next payday should be me getting a pair of tennis shoes.  Ramil said that I may be able to get a pair that fits here, but he wasn’t sure.  I think I should be sure to at least check.  All this weight coming off is starting to get flabby and it’s just as unpleasant to look at as it was before the weight came off.

11 Jan 2011 – Even though I didn’t go to bed until 0300, I was up at 0719.  Guess that means I’ll be taking a nap later on today.  I made banana pancakes this morning.  I had 2 of them and the rest are being eaten by others right now.  I didn’t even bother to see who was eating them.  I know Lita is going to get one though.  I had to use a different kind of banana, don’t know the name, but it is the one they normally use for the dessert that Winda loves so much, I forget the name of that to and don’t really want to go ask.  Maybe Winda will put it in a comment.  Anyway, I like the banana pancakes better with the other bananas.  Supposedly these kind have more potassium and calcium, but, to me, they didn’t taste better.  Of course I usually only eat things that taste good to me.

Lita, Neneng and Titing all had me take their blood pressure this morning.  Titing has a sore neck and he wanted to be sure it wasn’t because of high blood.  It came out to 123/78, so no problem there.  Lita already knows she has high blood pressure (she is on medication for it) and her’s was 147/93, so a bit high.  I think she’s about out of those tablets too, so we’ll have to check out the only doctor here that accepts our TRICARE, and see about getting some more.  Neneng’s blood pressure was low.  It was 93/59.

We had another brownout at 1:00pm today.  It only lasted about 10 minutes though.  We went for like 3 weeks without a brownout and then we have one 2 days in a row.  I hope this doesn’t turn into another long string of brownouts like we had before.  That really had me pissed.  That’s when I wrote the story about Ranting and Raving about the Electric and Governments   https://texaninthephilippines.com/?p=4187  .

Oh and by the way, it’s raining again.

It’s much later now, 0120am (the 12th) and it is still raining.  Not too much happen since my last entry, just a bunch of giggling 17 year old young ladies around for most of the early evening.  I just finished reading some of my 2nd favorite blog (mine is my favorite).  That blog is:   http://www.philippinesplus.com/ .  Dave’s got some good stuff on their you should take a look at it at least.  When/If you do read it AND you like it, you might mention that I recommended it.  That would be cool.  Between Dave and Bob Martin (Live in the Philippines.com), I have no excuse to eventually have an excellent blog.  I read their sites, get ideas and put my own twist on those ideas.  Their super way ahead of me in the blog knowledge department and probably always will be, but I’m sure going to try.

Useless Knowledge: Surprisingly, a cat stands a greater chance of survival if it falls from a higher place than from a lower place. The laws of physics explain why: A falling object, after traveling a certain distance through the air, reaches a final speed, or “terminal velocity,” because the object’s friction with the air slows the fall. The smaller the object’s mass, and the greater its area, the more it will slow.

Useless Knowledge: After his death in 896, the body of Pope Formosus was dug up and tried for various crimes.

Philippine History During the Japanese Occupation

On December 8, 1941, the Japanese invades the Philippines hours after bombing Pear Harbor in Hawaii. While the forces of

Gen. Douglas MacArthur retreated to Bataan, the Commonwealth government of President Quezon moved to Corregidor Island. Manila was declared an open city to prevent further destruction. After the fall of Bataan on April 9, 1942 and Corregidor, In March 1942, MacArthur & Quezon fled the country and by invitation of President Roosevelt, the Commonwealth government went into exile to Washington D.C. American and Filipino forces surrendered in May 6, 1942. Soon a guerrilla war against the Japanese was fought by the Philippine & American Armies while Filipinos were enduring the cruelty of the Japanese military against civilians.

Prior to Quezon’s exile, he advised Dr. Jose P. Laurel to head and cooperate with the Japanese civilian government in the hope that the collaboration will lead to a less brutality of the Japanese towards the Filipinos. Rightly or wrongly, President Laurel and his war time government was largely detested by the Filipinos.

In October 1944, Gen. MacArthur with President Sergio Osmeña (who assumed the presidency after Quezon died on August 1, 1944 in exile in Saranac Lake, New York) returned and liberated the Philippines from the Japanese.