[smartads] This morning I woke up at 0758 and thought I was in the wrong place because it wasn’t raining.  Maybe it was a dream?  Nope, it wasn’t.  It is now 11:45am and it has not rained all day.  In fact the sun has been shining most of the day.  I glad about that although I don’t mind the rain that much, I think we’ve had enough for about a week or so.  It’ll probably be raining again, maybe even today, but a little sunshine won’t hurt.  Also something else a little weird was that when I open my eyes I saw this wonderful pair of legs facing away from me.  The rest of the parts looked pretty good too.  That also made me believe I was dreaming.  Turns out that it was Cathy fixing the cable wire.  The TV gets fuzzy sometimes and if you adjust the cable wire just right you can get rid of most or sometimes all of the fuzz.  Lita says she doesn’t know how to do it and she didn’t want to wake me up, so I guess Cathy was around and she got recruited to adjust it.

Oh, and the sand castle above is in Boracay, as you may be able to tell from the message on the sand castle.  Wouldn’t it be cool to have the time to build something like this?  You could with a vacation through MJ Tourist Service.  Go to the Flyer on the front page and contact a representative, we’ll help your dreams come true. 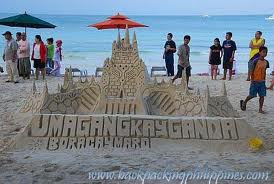 Since LolyKat is open now, I made a simple little Excel work sheet for the store’s expenses and sales.  It’s nothing fancy because I just learned how to do the Excel a couple of days ago.  Another thing that I have lots to learn about, just like doing a blog.

You also may have noticed that I added a “Reaction Bar” to the bottom of each post.  That is there so you can give a quick reaction to the post just in case you don’t feel like or want to leave a comment.  I’d rather have the comment, or actually having bother would be better, but I’ll take whatever y’all have time for.

I made pancakes, no banana’s, again this morning.  Lita was in the mood for them so Lita, Vicky, Me, Flor and of course Precious had one of them.

I had to take a nap for about an hour and a half today.  I just love that I can do that almost anytime I want to without fear of losing my job or losing money.  It’s great to be semi-retired at such a young age (53 next week).

I made my own lunch today.  I created a master piece stew that was super delicious.  I had a few pieces of chicken and added lots of potatoes, carrots and onions, plus a few hot peppers for flavor and zest.  I actually like making my own stew now.  Never did it much in Texas, but this way I know I’m getting exactly what I want.  Besides, Lita is usually pretty busy doing things so I should help out and do what I can for her.  I was right, it was super delicious…I ate the whole pot.  It was about 8 cubes of chicken, 2 potatoes, 2 carrots, 2 onions and 5 medium peppers.

There is another wedding at the Ciriaco Hotel and Resort today.  It is a very rainy day too.  Ramil says that if it rains on your wedding day, it means that you will cry a lot during your marriage.  I told Ramil he was full of it and he admitted that he just made that up.  The Philippines has so many different customs and beliefs, sometimes it’s hard to determine that from the bull they occasionally spread.

I added a Filipino Alphabet page to the blog.  It gives how to pronounce each letter of the alphabet.  It’s not that hard to pronounce if you look at it this way.  I really need to look at it because sometimes when I pronounce a word, it sounds like I’m saying it correctly, but no one understands what I mean.  I show them the word and they say it the say way I just ‘tried’ to.  Maybe it just my foreign accent.

9 Jan 2011 – I was up early today, at 0659.  I wanted to watch at least part of the Seattle/New Orleans game.  I didn’t expect that outcome, but it’s okay with me.  The NYJ and Indy game, same thing.  It seems that new blood is invading the NFL playoffs.  Don’t be surprised if the Chiefs beat out the Ravens tomorrow.  Philly and Green Bay…well I hate the Eagles (being a Cowboy fan), so I’ll root for the Packers.  I will say that if the Eagles make it to the Super Bowl, I will root for them because if they win, the NFC East will be the first conference that every team in it has won the Super Bowl.

I found out today that Flor, like the other workers around here, only get 1/2 a day off, on Sunday.  They usually take their 1/2 out of the middle.  From like 7:00am to 6:00pm, they are off.  Hours suck, but it’s their customs and I’m just here trying to fit in.

J’s job this morning was watching LolyKat.  He opted to work until noon, even though he didn’t have to.  Cathy took over the duties for the rest of the day.  Not much else for him to do around here.  I’m sure he got his hours off mixed in there somewhere.  He’s not one to complain though.  Most of the young ladies; Anna Pearl, Flor and Jasel went shopping downtown.  It was Flor and Jasel’s first trip to Calbayog Proper so I’ll have to find out what they thought about it.  They are from Tambis, very small, and I’m not sure if they ever been shopping in a larger city or not.  Not that Calbayog is that large, but it’s larger than any place around Tambis.

I hear a gathering outside the window here.  I’m going to see what’s going on.  Maybe they’ll have something else for me to put in here.  I’m about caught up from the Internet outage I had.

No, nothing much going on there.  Just Lita, J, Flor and cousin Emery eating and gossiping.

I put on a new pair of flip flops today.  I’ve been wearing the other ones since I’ve been here.  These are slightly tight, especially the right foot, that is still slightly swollen, but getting better.  I wish I would have bought a good pair of flip flops in Texas to bring here.  I’d like to get some 12W (preferably Dallas Cowboy ones) if I can find them (Jaclyn).  I thought I bought some sandals to wear here, but I can’t find them.  I don’t remember seeing them in any of the few boxes that we still haven’t unpacked either.  We’ve looked through them all, but there is not really anyplace to put them, so they’ll remained boxed until there is a place.

We’ve still got 2 more boxes in Texas that a friend is suppose to be mailing to us.  She was suppose to mail them in November, but it seems that they ran into a problem and will not be mailing them until next month (February).  Maybe those tennis shoes and sandals that I thought I bought, are in there.  The only thing I remember that are in those boxes is my phones.  I hope those phones work here because I really would like to have a cordless phone instead of this corded one in the computer room.  I mean as long as the service is working correctly, I might as well use it.  I’ve got to pay for it anyway.

Useless Knowledge: The name of the game may originate from the days of its origins in Scotland, when it was strictly a “Gentlemen Only, Ladies Forbidden” sporthence GOLF.

Useless Knowledge: While Rome ruled the world, Jesus Christ, son of Mary, was born in a cave, not in a wooden stable. Caves were used to house animals because they retained heat. A large church is now built over the cave, and people can go inside. The carpenters of Jesus’ day were really stone cutters as wood was not used as widely as it is today. So whenever you see a Christmas nativity scene with a wooden stable, that’s the “American” version, not the Biblical one.

(This one might be considered ‘useless’ but it takes me by surprise.  I’ve never heard this before…interesting)

On July 4, 1946, Manuel Roxas of the Nationalista Party was inaugurated as the first President of the Republic of the Philippines. Roxas died in April 1948. He was succeeded by Elpidio Quirino. Both Roxas & Quirino had to deal with the Hukbalahap, a large anti-Japanese guerrilla organization which became a militant group that discredited the ruling elite. The group was eventually put down by Pres. Quirino’s Secretary of Defense, Ramon Magsaysay.

Magsaysay defeated Quirino in the 1953 elections. He was a popular president and largely loved by the people. Magsaysay died in an airplane crash on March 17, 1957 and was succeeded by Carlos Garcia.

Diosdado Macapagal won the 1961 presidential elections and soon after he changed history by declaring June 12 as independence day – the day Emilio Aguinaldo declared independence in Cavite from Spain in 1898. Aguinaldo was the guest of honour during the fist Independence Day celebrations in 1962.

Ferdinand E. Marcos won the presidency in 1965 and was the first president to be re-elected for a second term in office. Marcos He embarked on an ambitious public works program and maintained his popularity through his first term. His popularity started to decline after his re-election due to perceived dishonesty in the 1969 campaign, the decline in economic growth, government corruption and the worsening peace & order. He declared Martial Law in 1972 near the end of his second & final term in office. Staunch oppositionist, Senator Benigno “Ninoy” Aquino (later went on self exile to the U.S.) & Senator Jose Diokno were one of the first to be arrested. During the Martial Law years, Marcos held an iron grip on the nation with the support of the military. Opposition leaders we imprisoned and the legislature was abolished. Marcos ruled by presidential decrees.

P.S.  Sorry I forgot the pictures (again) yesterday.  I didn’t forget today though.