[smartads] As you may have been able to tell by now, I am featuring the 17 different Regions of the Philippines.  There are 14 Regions with one of those (#4) being split into A and B and then there are 2 with names instead of numbers.  I’ve already featured the first name only one (Cordillera Administrative Region – CAR)

Calabarzon region is in the southern part of the main island Luzon. It is easily accessible from and is a popular destination for Filipino families living in Manila.

Calabarzon region is the result of the splitting of Southern Tagalog Region in two. The split formed, Region 4A Calabarzon and Region 4B Mimaropa. These two new provinces were formed in 2002.

The regions name is an acronym of it’s five provinces.

These five provinces stretch from one side of the island to the other and are rich in resorts and natural beauty. 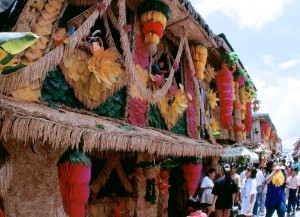 Useless Knowledge:  When actor Michael J. Fox first auditioned for the TV series Family Ties, he was $35,000 in debt and living on macaroni and cheese. 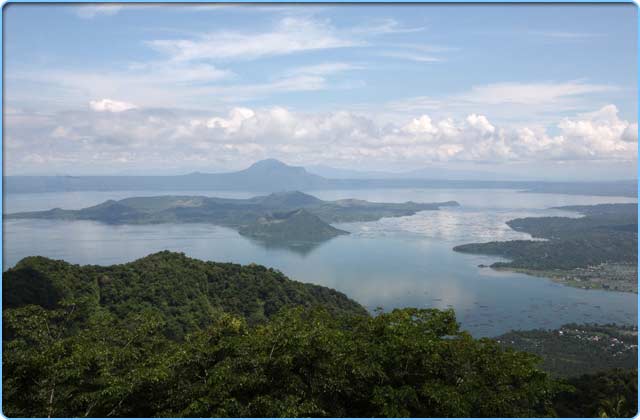 I got up late this morning even though I woke up early.  I just didn’t feel like getting up because the only real thing for me to do was get on the computer, which I love to do, but I didn’t want to take the fan from Lita or turn on the air con.  Getting on the computer was not necessary at that time and I can save a little money by not using the air con, then I will. 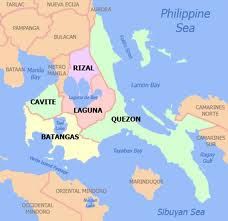 Only 3 more days before we go to Tacloban and everything is still a go at this point.

Lita went to church and shopping this morning.  church started at 10:00 and she wasn’t home until 11:45.  She almost forgot to pay the tricycle driver.  She was in the house for about 5 minutes before she remembered.  He had been sitting out there waiting the whole time.  I hope she gave him a few extra pesos for being so patient. 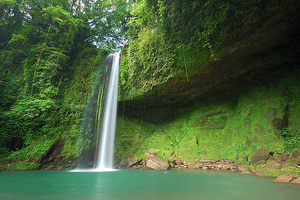 J washed the Nissan today.  That’s a job he does every Sunday now.  He has been doing it the last 4 or 5 Sundays, but I think he likes it better now.  We have a water hose with a spray attachment now.  I guess that’s better than just the plain hose or even just a bucket of water before that. 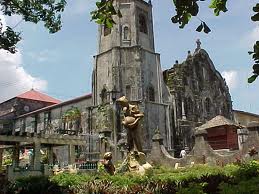 Lita remembered to get a couple of AA batteries.  She really wanted one to use in the clock in LolyKat.  It fell and is now broken, so we have to use tape to hold the battery in place, but it’s working.  I sat here taking notes and watching it for the last 10 minutes, so I’m taking it to the store now.  Okay, I’m back.

There was suppose to be a brown out this morning, but thankfully it never happened.  It’s 12:12pm now, so even though there still could be a brown out, it won’t be a scheduled one. 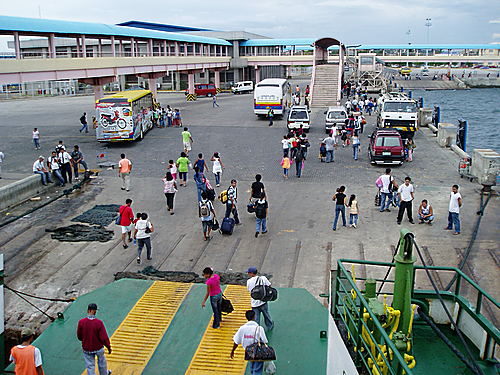 Useless Knowledge:  Following his breakup with the Beatles in 1971, Paul McCartney formed his group Wings. The group was nameless until McCartney, awaiting the birth of his daughter Stella about a month later, prayed for her health. He came up with the group’s name on the “wings of an angel.”

Lita’s fixing to force me to eat pineapple again.  Oh the things I have to put up with around here.  Take them away, take them away … no, wait not too far.  Oh, the torture.  Just give them to me dear, I’ll get rid of them for you.  No, it’s okay, I can do it alone.  (5 minutes later)Hon, could you come get this empty bowl in here. 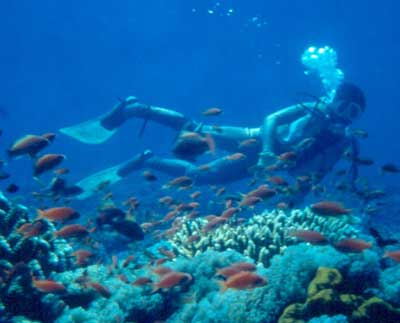 J is sitting in the store, eating again.  I told him that it wasn’t fair that he eats so much and is still so skinny.  He got a little chuckle out of that.

Some guy that sells wood came by today.  He was driving along the highway in his tricycle and noticed our second floor wasn’t done yet.  He thought he’d take the opportunity to let us know that he sells building material and lives in Gandara.  I think that is some good initiative. 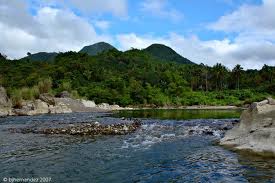 Just so you’ll know, if we had the money, we’d build 2 more stories on this house.  We’d actually like to live up away from the noise of the children.  The 3rd floor would be a good place to live, but for Lita getting up and down would be a problem.  I don’t think we could afford an elevator, but she could climb to the 2nd floor, take and rest and then continue on to the 3rd floor when she was too tired.  Don’t they make lifts for people that can’t walk too much?  I’ve seen those on TV, but I have no idea of the price.  Probably too rich for our blood.

Jascyl stopped by to use the computer to get into her Facebook account.  I guess she couldn’t figure out how to get to the Facebook, because she left, said she’d be back, but never did.

I was just outside drinking a Red Horse.  Emei bought it for me.  Lita didn’t want me to drink, but I have this thing that when we’re in front of people and she tells me not to do it, then I do it.  Sometimes even if I didn’t want to do it to start with.  I was suppose to have only 1 glass of beer but, as usual, it turned into more.  In this case it was only 1 liter, so it wasn’t too bad.  Not enough to bother a big guy like me, especially after I just ate. 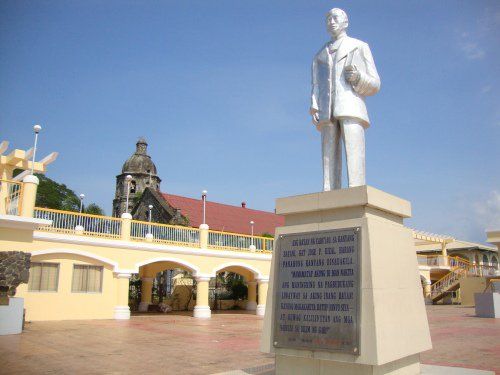 Marianne and Mar stopped by for a few minutes for a reason unbeknownst to me.  They were here for so short of a time, Mar didn’t even want to get out of the car.  Marianne came over, did the respectful mano po then disappeared to do whatever she came there for.  She did say good-bye before she left though.  She is such a very nice and respectful young lady.  They all are really, but Marianne has never forgotten to do the mano po and Juvic and Grace have.  If the youngsters see the older ones everyday, then the mano po is not necessary to perform.  In my case, Cathy, Ramil, Ado, Robbie and Chatty do not have to perform this because they all live right here and see me everyday.  Now when we go to Texas and are gone for 4 months, they probably will then, when we return.  Just in case you may be misinformed from other websites, when the mano po is performed, they are not ‘kissing’ the hand, they are simply placing the back of the elder’s right hand to their (the young one) forehead.  The word “Po” is a word of respect that means like “Sir” or “Ma’am”.

I let Emei try some of the stew.  While I was in the house, he told Lita that it was good.  Sometimes I wonder if people tell me the truth or just what I want to hear so I won’t be upset.  I figured he’d tell Lita the truth, but, for Emei, if he didn’t like it, I’m sure he would have told me, without a problem.  I’d rather everyone tell me the truth, whether I’m going to like it or not.  You don’t need to boost my ego or worry about hurting my feelings, just tell me like it is.  I’m a big boy, I can deal with it.  I’m probably going to find out sooner or later anyway and I’d like for it to be sooner, especially in the cases where I might be able to do something about it.

I had to close the gate for Lita, but she wanted me to use an umbrella.  I don’t use umbrella’s unless they are black or dark blue or if it is raining super hard.  I guess we’ll have to get me an umbrella because we don’t have one of those here, so I got a bit wet.  I’ll be taking a shower later anyhow. 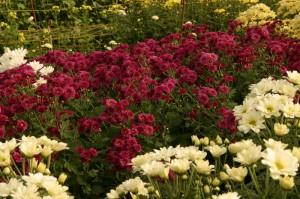 At 7:55pm I ate a bag of Jack n’ Jill Chiz Curls.  Basically just cheese puffs.  I suppose that is not good for losing weight, but it’s too late to take it back now.

There’s water coming into the house.  It seems to be coming in through the bottom of the back door.  This is the first time it’s done that so we’re not sure what’s causing it.  We’ll check it during the daylight to see what the problem could be.  There is an opening between our house and Cathy’s house where the rain comes down, but, like I said, it’s never done this before.  I put a flat piece of tin and another flat piece of wood to cover the bottom of the back door as much as I could.  That seems to have stopped it, but it still needs to be looked into.  There was so much, it was starting to get close to the bedroom door.

This post turned out a lot longer than I figured, but I think it had some good information in here.  Plus when I started I didn’t plan on putting the information about this book. 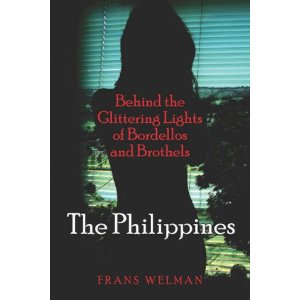 The above book looked interesting and it is about the Philippines so I thought I’d make sure that everyone knew it was out there in case they wanted to check it out.  I didn’t see anything about there being pictures but it did have this Editorial Review:  From the Inside Flap – Under the smoke of the active volcano Pinatubo, just a hundred miles north of Manila, Frans Welman travels to American bases Clark and Subic where the towns of Angeles and Olongopo cater to the recreational needs of American servicemen. Since the eruption of the volcano, both bases were converted to either airports or trade zones. What remains in different areas are some bordellos which cater to tourists. Frans Welman leads you into the dynamics of bordello life—go-go dancing, private show performances and prostitution. He also takes you into the social background of the women and the behavior of the servicemen. This kind of prostitution is organized by local and national politicians. Frans Welman delves into the culture clash and the expectations from both the soldiers and the women that serve them.

That pecked my interest, how about yours? 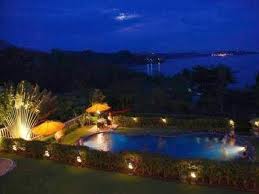 Useless Knowledge:  When it came time to build the Capitol building, a contest was held to see who the designer would be. The winner was William Thornton, a doctor and amateur architect, who received $500 and a city lot as his prize.

1898 – After having been led to believe through verbal promises by United States officials [the consuls in Singapore and Hong Kong, Admiral George Dewey and Gen. Thomas Anderson] that America is an ally, President Emilio F. Aguinaldo writes to Gen. Anderson of his people’s expectations that while foreign powers have not yet acknowledged  the Philippine Republic, “the great North American nation, which  struggled first for its independence, and afterward for the  abolition of slavery and is now actually struggling for the  independence of Cuba, would look upon [Filipino assertion of  sovereignty] with greater benevolence than any other nation”;  some three months back during the second phase of the Philippine Revolution against Spain, intersecting with the Spanish-American War, the Bald Eagle nation, through Admiral Dewey, forged an alliance with the Filipinos, deceptively promising Aguinaldo that the U.S. will honor the independence of the Southeast Asian archipelago; exactly a year later, on July 24, 1899, almost six months into the  bloody and protracted Philippine-American War (1899-1914), Foreign Minister Apolinario Mabini y Maranan will optimistically write about  how “favorable public opinion (on Philippine independence) in America is steadily gaining ground to the detriment of the imperialist party.”