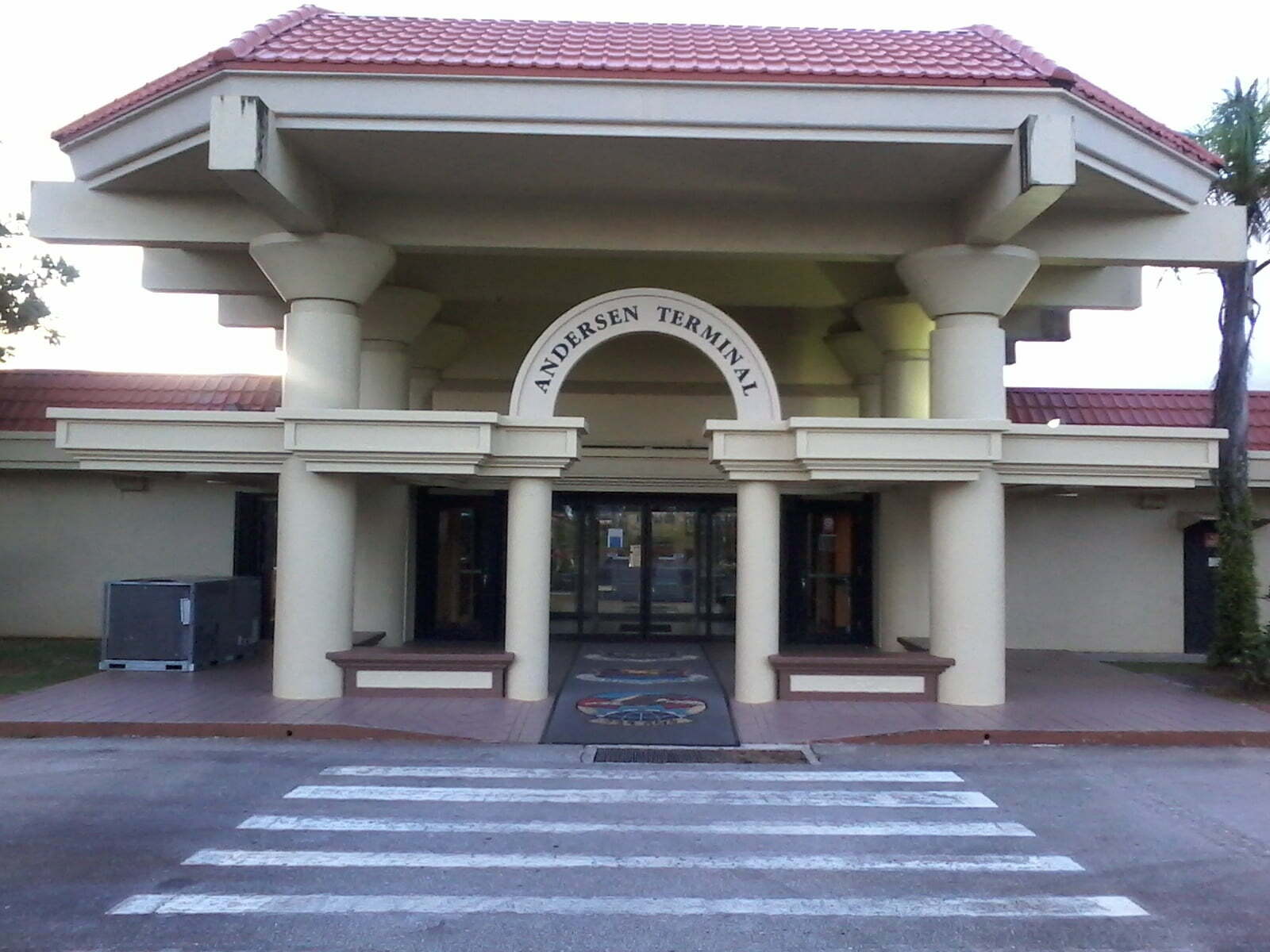 So my wife and I are in Guam at this time.  We are staying at the Days Inn and getting ready to head for Andersen AFB to get he ID card updated.  If you missed the previous post that explains all we did while on Guam the whole weekend, and would like to know, please click on this link HERE.  We are really getting into the meat and potato portion of the trip now.  Up to this point it has been all explaining the area around the Days Inn.  Now it’s time to hopefully get down to business.  At least we hope so.

Waiting on the Shuttle

The next morning, 25 Aug 14, we were up way before our 0800 wake up call.  That is usually the case for us, especially Lita and probably is for most people when something important needs to be taken care of as soon as possible.  The SSAM Shuttle is scheduled to pick us up at 0930 and we headed downstairs around 0900, just in case the shuttle was a little early.  I have more information in the previous post, but some information for that SSAM Shuttle is: Website: www.ssamshuttle.com , E-mail: ssamshuttle@gmail.com and phone # (671) 689-SSAM (7726). Remember that it is the only shuttle authorized to go on base and since there are no on-base taxis, that is a very important authorization to have.

We made it on base without a problem, but it seems that the ID section had moved since the last time this driver was on the base.  She is not one of the normal drivers, but they were busy that day, with one guy sick, so she volunteered to drive.  Actually, according to someone I was talking to at pass & ID, the ID section has never been at the location that I found on the internet.  I don’t know what to think about that, but at least we are in the right place.  The ID section is not a very big place and it had quite a few people there, most of them in uniform.  I thought it was going to take a long time to get things done and it there were problems even longer.  However I was wrong.  We signed in, took a seat and after about 10-15 minutes we were called into one of the cubicles.  The paperwork and new picture taking took another 10-15 minutes and the final waiting to pick up the new ID card another 10-15 minutes.  So we were in and out in less than 45 minutes.

Other Andersen AFB Space A information

After acquiring her new ID card, we can now travel via Space A.  The only reason we took a commercial flight to Guam from Manila was because her ID card was expired.  Now we are good to go for awhile.  So we walked over to the AMC Passenger Terminal checked out the monitors with the Space A information on them.  There was no chance of us getting out that day, barring any unscheduled flights, but a decent chance for tomorrow and Wednesday.  Wednesday looked like the best chance.  We decided that we will just hang out at the terminal, since they are one of only 2 AMC terminals in the Pacific that are open 24/7.  We figured no one would mind because there were not too many people there and they are probably use to retired military people hanging out around the terminal waiting for flights.  We ordered a couple of in-flight meals because the In-flight kitchen is in the same building and just down the around the corner and down the hall.

The flight for tomorrow we could try to get on, but it’s going to Kadena AB Japan first and, according to the Space A schedule, there are no flights currently scheduled to go anywhere near where we want to go.  So instead of getting stuck at a terminal (Kadena)(this will be funny later), we decided to wait until Wednesday and go to Hickam AFB HI .  They have a flight going to Travis AFB CA, then to Kelly AFB TX (our destination) the following day, plus, just in case, they had 2 more flights scheduled for Travis that very same day.  Of course Hickam is the other of the only 2 places that has a 24/7 Passenger Terminal, so that makes it an even better reason to head that way.

While waiting I decided to walk to the shoppette.  I didn’t know exactly where it was, but I was pointed in the general direction.  I got a little lost, but I found it.  I bought a couple of the bowls of instant noodles and a couple of their hot links.  While returning, I got lost again.  I guess because I found the shoppette  by accident, I accidentally turned the wrong way when I came out the door.  Of course it started raining while I was walking.  Luckily I figured out how to get back without too much trouble and asking someone which way it was to the passenger terminal.  We sat/slept in the terminal all night.  Heck even if we wanted to go to billeting, we’d have to walk.  Plus I was told by one of the customer service agents at the terminal desk that billeting has been pretty full recently.

So now it’s the next day and they are doing the roll call for the Kadena flight.  A lot of people showed up for this and there are only 10 seats, so our chances are someplace between slim and none.  It’s okay, we really wanted the flight to Hickam anyway, but of course traveling Space A you take whatever you can get going even close to where you are going if you have to. Of course then thing happen like a flight getting postponed or cancelled.  Which is what happened to that Hickam flight.  It got postponed until the 27th, so now there are 2 flights going to Hickam tomorrow.  Still we could make it to Hickam and get on a flight to Travis and still make the flight on the 28th for Kelly, thanks to the international date line.  So while we are waiting we get one in-flight lunch for the both of us because we have the soup I bought at the shoppette.  Plus I made a couple more trips to the shoppette and also to the commissary.  They are both close to the passenger terminal.

So do we get out, or will it be another delay and a long wait in store for us?  If we get out, will we be able to secure a seat on the next flight, if that flight is actually going, and on time?  I’ve heard stories of a lot of retirees hanging around the passenger terminal at Hickam, just exactly have many is “a lot”?  This would be our first trip to Hawaii, so we are wondering what the terminal looks like.  What kind of restaurant(s) do they have, if any?  What else do they have there to help us out?  Stay tuned for the answers to these questions and more.