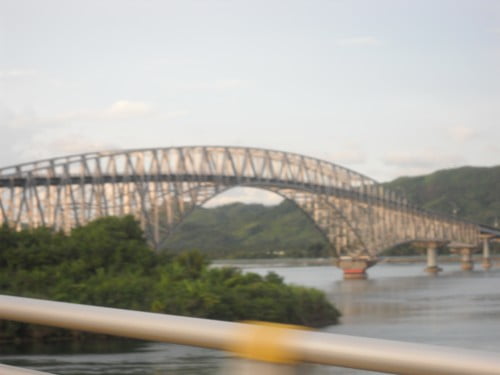 As everyone should know by now, a Category 5 hurricane hit the islands of Samar and Leyte on November 8, 2013. They are still digging, looking for bodies and people are now able to access the damage done to their properties and start any insurance claims. Locally known as Typhoon Yolonda, it is considered the biggest storm ever to hit the Philippines and is on scale with Typhoon Katrina that wiped out New Orleans, Louisiana. This post and several more to follow are the stories of how the storm affected us here in Calbayog City, Samar Philippines and our lives in the darkened city.

The original path of this mighty hurricane had it projected to head right at us. This concerned me in 2 ways. The first thing, and the way less serious of the 2, is that there has not been a major weather event here in Calbayog for, I hear, over 70 years. It’s one of the things that I be sure to let potential new expats now when they ask about this area. I didn’t want that record to be broken. Second, of course, because it is such a powerful hurricane that it would definitely destroy many of the small nipa huts and shanty build houses here. Our house is pretty well built, but a storm of that size and power is capable of tearing it up also. Now we are not on the open side of the ocean, so the storm would have to travel across land, thus slowing down a bit before reaching us, but the winds were so strong that it would not have made much of a difference probably.

As Yolonda approached our island of Samar, it started deviated southward though. Soon we were only on the outer ream of the winds and it seemed the impact would be more in the Category 3 or 4 range. Still not good, but much better than a Cat 5. Next thing I know they are telling me that the storm had already hit. It had turned so far south that we didn’t even notice that there was a storm. All the wind and rain was minimum and basically it was just another rainy day here. Not so on the eastern portion of Samar and in Tacloban City Leyte though down south. I don’t know all the details of Eastern Samar yet, but I know Tacloban City was virtually destroyed. My wife has first cousins living there and it was a few days before we knew of their status.

People here did not seem concerned enough to me as this storm approached at first. Of course once it altered its course south, there was no reason to.  It could have veered north instead of south, no one knew. I was telling them that they should get a lot of things in the house or tie them down, but it was never done. If it would have hit here, we would have lost plenty too, probably including my computer. It seems that they did not comprehend “Category 5”. After the pictures and the stories that they have heard, I’ll bet that next time they will pay more attention.

I probably will not have any pictures for several posts unless I can obtain some of the destruction in Tacloban and/or other parts of the Philippines affected by Yolonda. I will now begin my notes that I started ‘after’ I found out that we were no longer in any danger of being struck by this immense hurricane.

So Typhoon Yolonda missed Calbayog City completely, sort of. We did not get any of the wind and very little rain, but it did knock out our power plant and evidently it is the only one capable of supplying us power. Officially by the clock on the wall next to our bed, the power went out at 0158 on Friday, 8 November. Little did we know at the time that it would turn into the longest outage in recent memory and maybe even the history of the island. When I first starting writing the notes for entering we had been without power for 62 1/2 hours. Already, by far, the longest we have had to go without power since we’ve been here. The previous record was, I think, 15 hours and some change. There are rumors of no power for 1 to 5 weeks floating around here. Rumors float like tumbleweeds in the desert though, they don’t mean much. And in the coming days or weeks, I know we will hear many other rumors.

Pretty much the whole first 3 days of no power we spent at the house, waiting on the power to come back. I, for one, was in disbelief and was already bored out of my mind. I did take a couple of trips downtown, but not to do anything in particular. I noticed an increase in the number of people in the streets downtown though. It was a bit more crowded than normal. Come to find out that people that survived the storm down south, were escaping to our city. That would mean more of our resources would be used. I wonder if there is a plan for something like that here? I doubt it very seriously.

On Day 4 I did get to an operational internet cafe. It seems it’s the only one in town, and there are many of them, that thought to have a generator hooked up. I had to let the people back in Texas know that I was dead or injured and that things here were pretty much as normal, except for no power. Of course the internet cafe was extra crowded and they were limiting people to 1 hour sessions so everyone could get a chance. I thought that was a smart and considerate move. They were still charging their normal P27 per hour rate, but I’m sure they could have been charging double that and still got it. I know that I would have paid it. It’s nice to know that they did not take advantage of a bad situation.

As it turns out, I didn’t have to pay at all. Juvic was also there and she did not use her whole hour so she let me sit at her terminal. After I got a message out to Texas, I noticed that Jade (a Filipino niece) was online. Her parents and brothers are the relatives that live in Tacloban so I asked her if she heard anything. She had not and she was pretty worried. To make matters worse, the news reports were saying that the section of San Jose in Tacloban was hit pretty hard, and that’s where they live.

Since no online contact could be made, Victor and Ramil decided that they would take a trip down to Tacloban, normally about a 6 hour drive. According to reports that we were hearing at the time, no vehicles were being allowed over the San Juanico bridge until after it was inspected for damage. They were however allowing foot traffic, so the plan was to park on the Samar side and walk the 2 miles or so across the bridge and get some transportation to the San Jose area. According to some of the things they told me, and maybe I’ll get more in depth details from them for later, it was not something for the faint of heart to see.

I think I will continue with the rest in the next post. It probably will be tomorrow, but should not be more than 2 days away.