[smartads] This is Lita and her cousin Emei.  He had a bit too much Tanduay Rhum to drink and was seriously thinking about sleeping right on this bench.  Lita told him that it would be too cold and maybe too wet, since it was raining.  He eventually walked to his room next door without much incident, just a lot of swerving.  This is out front of our house at the picnic table.  That’s our Nissan in the background.  The window where the cooler is hanging is one of the computer room windows.  Don’t forget to click on the pictures to get a larger picture and more details about the picture. 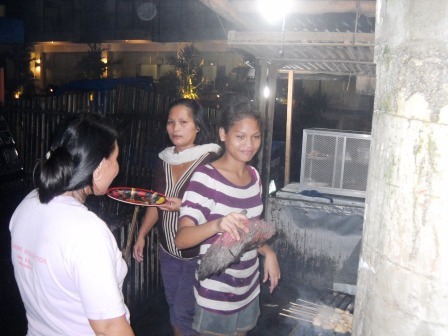 Useless Knowledge:  The lead singer of the Knack, famous for the 1980s hit “My Sharona,” and Dr. Jack Kevorkian’s lead defense attorney are brothers: Doug and Geoffrey Feiger, respectively.

You know it’s too bad that the brown out occurred the other night.  It was a slow night and when I last checked the hits before the power went out, it didn’t look like it was going to make it to 5000.  Now look at the 2 day total – 13,982.  I’m pretty sure that we could have seen a new one day record.  Oh well, we will never know for sure. 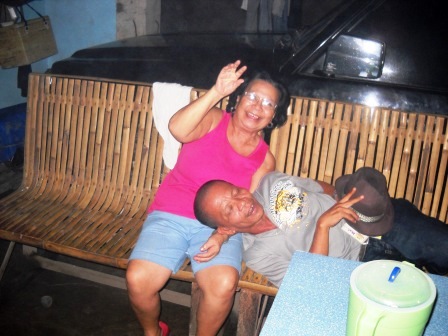 I have a cartoon picture of a sleeping boy on this website and it totally amazes me of how many hits that picture gets.  In the last 2 hours and 52 minutes, it has been looked at 7 times.  I don’t know why, but I ain’t complaining.  I suppose that if I’m ever going to be one of those websites that get 100,000 plus hits per night, then I should get use to things like that, and be thankful for them too.  The more people that visit the website, the more of a chance I’ve got of someone actually purchasing something from one of the ads I have listed.  It will happen one day, not yet, but some day. 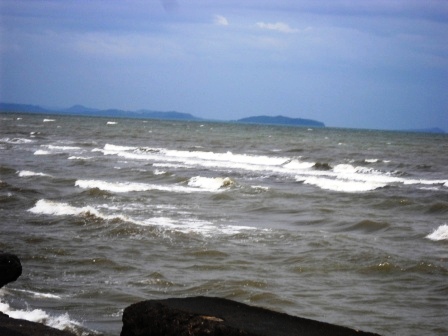 Waves rushing in during rough weather

Around 10:20, Lita and I went downtown.  We went to eat at Carlos n’ Carmelos, for me to get a haircut and to go shopping for LolyKat and for the  house.  At the restaurant I ordered lasagna, 1 taco, 1 order of potatoes and 2 orders of cheese sticks.  I wanted only 1 order of cheese sticks and some baked macaroni, but they were out of macaroni.  What I ordered is everything that is on the left side of the menu they have standing up at the front counter.  Lita makes a much better taco than this people except the beef they use here is better than what we’ve been able to find so far.  When we get better beef, Lita will be selling a lot of her tacos.  We just have to get people to try them first. 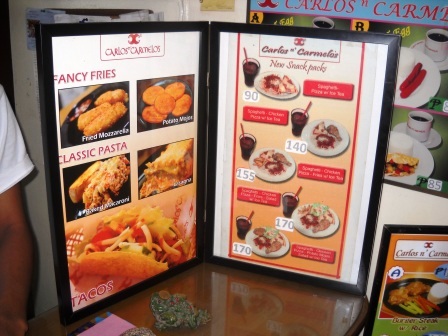 Lita ordered fried chicken with rice, but we helped each other eating all the food.  I had 2 large glasses of iced tea and Lita got a bottle of water.  If I had known the water was cold I would have gotten 2 of those.   They had water on the shelf, so I figured they would give us that with a glass of ice.  Next time I’ll remember.

The pajak-pajak took me to the barber shop to get my haircut.  We were going to go to a shop downtown, but the driver informed us that all the barbers there are lady boys, and that just won’t do for me.  We ended up going to the barber on the highway that I went to the time before last.  The one right across the street from where my old regular barbershop use to be.  I should get a picture of the new barbershop, but I didn’t this time. 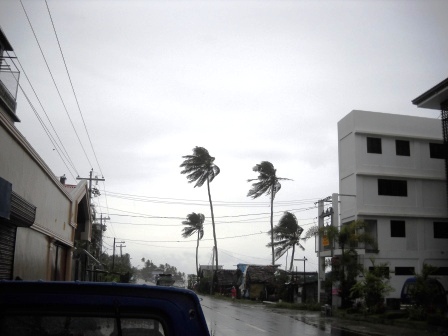 After they dropped me off, he took Lita shopping.  I was suppose to meet her at JustMar after getting my haircut.  Well I decided to let the guy give me a shave also while I was there, so I was there a little bit longer than normal.  As it turned out, that was good.  More on that in a minute.  For the haircut and shave it was P60 ($1.43).  I gave the guy a 33 1/3% tip.  I ain’t telling what it was, but that should be easy to figure out.  I’m going to wait to see who knows the answer and that will tell me that someone actually read this post this far.

As I was leaving the barbershop and starting to walk towards JustMar downtown, Lita showed up in a pajak-pajak.  It seems that we forgot, again that the largest grocery store in town, thus far, is closed for 1 hour from noon to 1:00pm, for lunch.  Why they can not split up the lunch schedule so they do not have to close, I don’t know.  If I would have left the barbershop on time, I would have gone to JustMar and they would have been closed.  Lita just went to the smaller store (they don’t close).  I really think that when the mall is built and the air conditioned supermarket is open, that JustMar  will start losing money.  I know I will be going to the newer market because they will have more of what I want and because it will be a lot closer to the house. 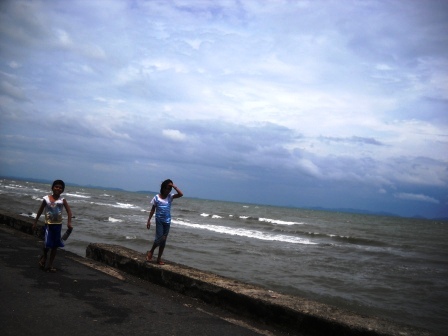 Bata on the Highway

Let said I needed to go home to bring the groceries that she had bought so far and to bring P200 to J, for school.  He was suppose to be coming home at lunch to get the money, but we don’t know what time his lunch is.  Anyway I came home and Lita went to the open market to get some vegetables and cigarettes. 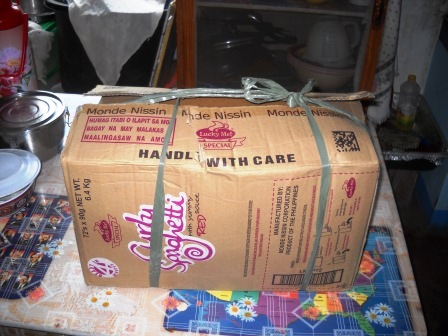 When Lita returned I helped her get LolyKat in order.  She bought a lot of the popular things to sell in the store on that trip downtown.  I hung up most of the packets of coffee, coffee mate, Milo and soap.  I then separated the can goods and made sure like cans were together.  After that Lita decided that she needed to go back downtown to get a large Tupperware container to put the rice in.  While she was gone I changed 1 24 kilo bag of rice into 24 1 kilo bags.  Each bag will be sold for P33.  So total price for all bags is P792.  She paid P700 for the rice, so we are making a profit, of course, but as you can see it’s not much of one.  It’s good enough though. 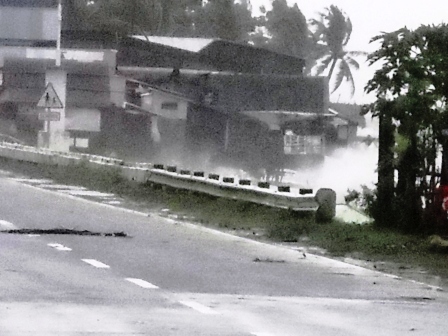 Waves splashing up on the Road

Lita mentioned to J about the leak we have over the TV.  I guess he’ll take care of that during the daylight, maybe while we are in Tacloban on Saturday.  Yes, Lita has informed me that she would rather go to Tacloban on Saturday, instead of Friday.  On Friday it would be less crowded at the mall, but on Saturday J does not have to go to school, so he will be there to watch LolyKat.  I told Lita that I don’t care what day we go, as long as we go this time.  It’s going to take a lot to keep me from going this time.

Useless Knowledge:  Debi Thomas was the first black athlete to win a medal at the Winter Olympics, and is the holder of 2 national championships and 1 world title in figure skating. She is now an aspiring orthopedic surgeon at Chicago’s Northwestern University Medical School. 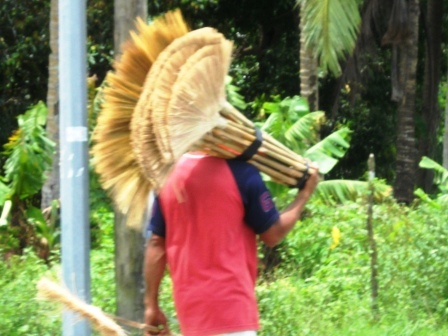 I walked down to the other sari-sari store earlier to buy a Red Pepsi and some water.  They still don’t have any 1 liter bottles of water, so I bought 5 1/2 liter bottles instead.  It comes out to the same price, but I lose a 1/2 liter in the exchange.  Oh well, nothing I can do about it at this time.

I loaded the other 3 Rainbow Six games on the computer.  One of them, Eagle Watch, doesn’t seem to be working, but I’ll see if I can figure it out later.  I like the training on the Black Thorn game a lot.

Vicky and Sally came to work early this morning, so they closed the BBQ down at 7:00pm so the could go home.  We had already sold a lot, but the customers were becoming less and less, so it was a good time to pull the plug for the evening.

I just put about 4 different posts on the website.  I’m just getting ready to start the post for the activities on 26 July, so the 27 July post.  The computer is being slow again tonight.  I’m going to try cleaning the disks and getting rid of unnecessary files to see if that speeds things up. 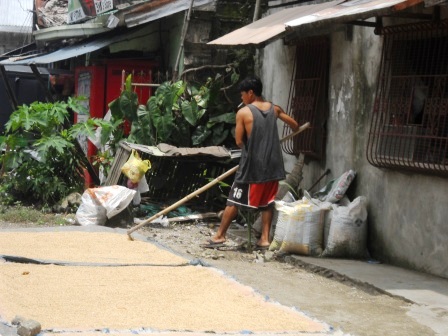 Lita went into the kitchen to eat.  It’s way too late for me to be eating.  If I eat this late I would either get a sour stomach or heartburn.  Neither one is good to have.  I don’t like a sour stomach because when I burp, it tastes like boiled eggs, and I don’t like boiled eggs.  I would however choose sour stomach over heartburn.  I had heartburn twice in my life and it ranks in the top 5 of pains that are almost unbearable.  Right up there with a swift kick in the genitals and paper cuts.  That’s how bad it is to me.  Except in the case of heartburn, the pain lasts much longer than those two.  I guess I would rate heartburn at #2, the swift kick at #3 and paper cut at #4.  I leave #5 open because I haven’t figured out what to put there yet.  Of course the #1 pain that I have every felt is right after the operation I had for the kidney transplant with my sister. 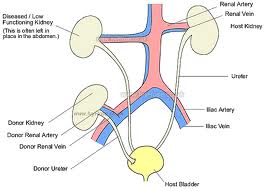 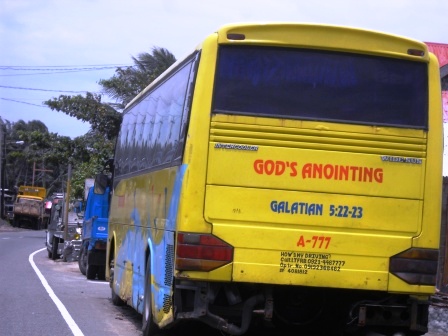 I already feel like a blimp again, but I’m sure I’m still around the 120 kilo mark.  I get this feeling when I drink a lot, so I’m not going to be worried about it until I actually step on the scale and see a large increase.

Useless Knowledge:  The Brooklyn Dodgers (who later became the Los Angeles Dodgers) did not get their name because of their sporting ability. The term dodger was a shortened form of the term trolley dodgers, which was first used to describe Brooklynites for their ability to avoid being hit by trolley cars. 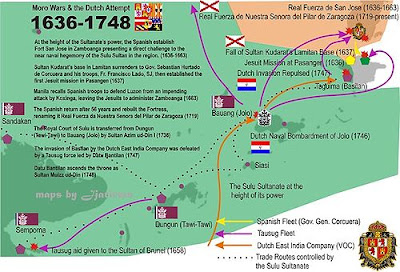 1645 – Native Muslims attack the Spanish garrison with help from a Dutch squadron that arrives at Jolo from  Batavia (North Jakarta) during the Spanish colonial rule  of the Philippines; the Filipino-Spanish troops under  Commander Esteban Ugalde will resist and finally force  the withdrawal of the squadron after three days of  combat in what would be just one of the few unsuccessful  attempts of the Dutch to expel the Spaniards from the  Philippines; the contexts are Spain’s tenous hold on Mindanao and  the so-called 80 Years War of  Netherlands’ revolt and, subsequently, assertion of its  independence.