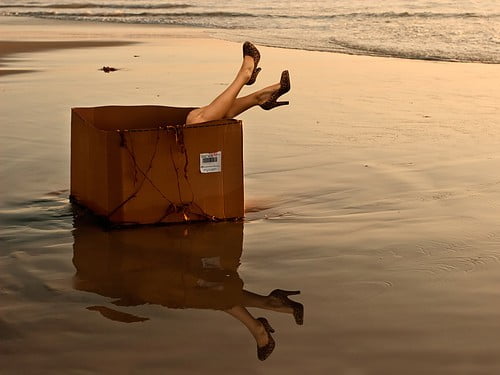 Old Lady in a Box

[smartads] I’ve seen a lot of crazy things since I’ve been in the Philippines.  Things done by a few of the crazy people we have around here that probably should be put in a sanitarium can not due to no money and/or no relatives.  Now I know that these people can’t help what they are doing and I wish I could do something to help them.  That doesn’t stop me from enjoying their antics though.  We have at least 3 of these people that are around here.  There are 2 men and 1 old lady. There are 3 things that stick out in particular, the 3rd one, that happen today, prompted me to do this short post.

1.  The 1st story I have posted on the site before.  It is the guy that wondered on the Ciriaco property and was trying to get inside the hotel.  Of course the security guards know they guy is ‘out there’, but they still are not allowed to let him enter the hotel.  This guy was very persistent.  He tried to walk in and the guards chased him away.  He came back to try again and also started an argument with the guards.  The guards had their hands full trying to convince this guy to leave without injuring him.  In fact, as it turns out, they never even had to touch him.  After about 10 minutes of back and forth arguing the guy finally left.  It was pretty noisy out there for awhile.

2.  The 2nd story is the other wacky guy.  This one though didn’t even do much.  He was just walking down the street, but a lot of the younger teenagers and adolescents know he is a bit touched, so they try to avoid him on the street.  Well as he was walking down the street, a young teenage guy decided to walk on the opposite side of the street to avoid any possible confrontation.  That didn’t work out.  I guess this guy figured he was tired of people avoiding him, so he crossed the street to be on the same side as the teenager.  The teenager crossed to the other side again, and the guy followed.  The teenager and this guy were both walking in the same direction, but the teenager was doing his best to walk faster to get ahead of this guy.  He couldn’t, so he decided to run instead.  Well it turns out that this old guy can run pretty fast to, so he gives chase.  Last I saw, the teenager was crossing the street again, still running and he was well ahead of this guy and getting further ahead.  A couple of days later I saw the same guy walking by, but no problems.  I guess he was just in an odd mood that day.

3.  The last story happen early this afternoon.  Since you have already read this far, I should tell you that the picture is a bit misleading, oh ok … it’s a lot misleading, but I put a title down, then search for a picture.  I find that I can get better and sometimes funnier pictures that way.  Lita and Vicky were outside by the picnic table talking and doing some cooking things.  I don’t know what it was.  The local loco lady came in through the gate and walked up to a basket that we have covered on a little table.  Well in that basket is the box that we keep the money in for the selling of the food.  This lady was getting ready to open the box when Lita and Vicky both started yelling at her.  Come to find out that she is not after the money anyway.  She likes the little pocket books (dime novels) that Lita has.  Lita let her have some before and I guess she read those already.   She never brought those back, so Lita didn’t want to give her anymore.  Vicky just led her to the gate and she walked off just like nothing happened.  I don’t know if that is something that she does often, but I know that Lita has given her some food before.  That’s okay with me, she looks like she’s hungry and I’m not going to argue about feeding an old lady that is hungry, whether she is in her right mind or not.