[smartads] We got a fairly good idea of the audience for classical music in Calbayog City in Western Samar with the opening of the First Samar International Music Festival on Oct. 29 with violinist Gina Medina and pianist Mary Anne Espina.

A movement from a Mozart sonata set the tone for the evening, and here you saw the best of Espina and Medina as chamber musicians. With the excellent acoustics of Café Elsa of Ciriaco Hotel, the performance was one of the finest of Medina and Espina and the audience absorbed the intensity of the moment with relish.

From the romantic pieces of Dvorak to the Kreisler selections, notably the Praeludium and Allegro (in the style of Pugnani), the audience roared with approval.

You could hear a pin drop in the rendition of  Constancio de Guzman’s “Bayan Ko” and its patriotic impact was not lost on the audience, some of whom were in tears.

But they quickly recovered in the first encore, “Sa Kabukiran,” and gave the artists a resounding standing ovation led by Rep. Mel Senen Sarmiento and Mr. and Ms Nicanor Chan, parents of musician Violeta Chan, who used to work with “Tita King” Kasilang at the CCP in the late ’70s.

Also in the audience  was Raymund  Ronald Ricafort from the Calbayog Mayor’s Office; friends and relatives of filmmaker Chito  Roño, who is from Calbayog City;  the city’s cultural officer, Jonas Lim. 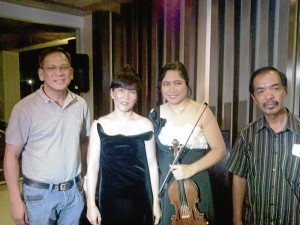 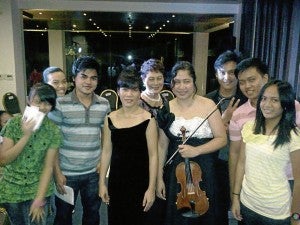 Another encore followed—Antonio Molina’s “Hatinggabi”—and you could see that the audience’s thirst for music was  generously addressed.

Please continue reading at the link below.