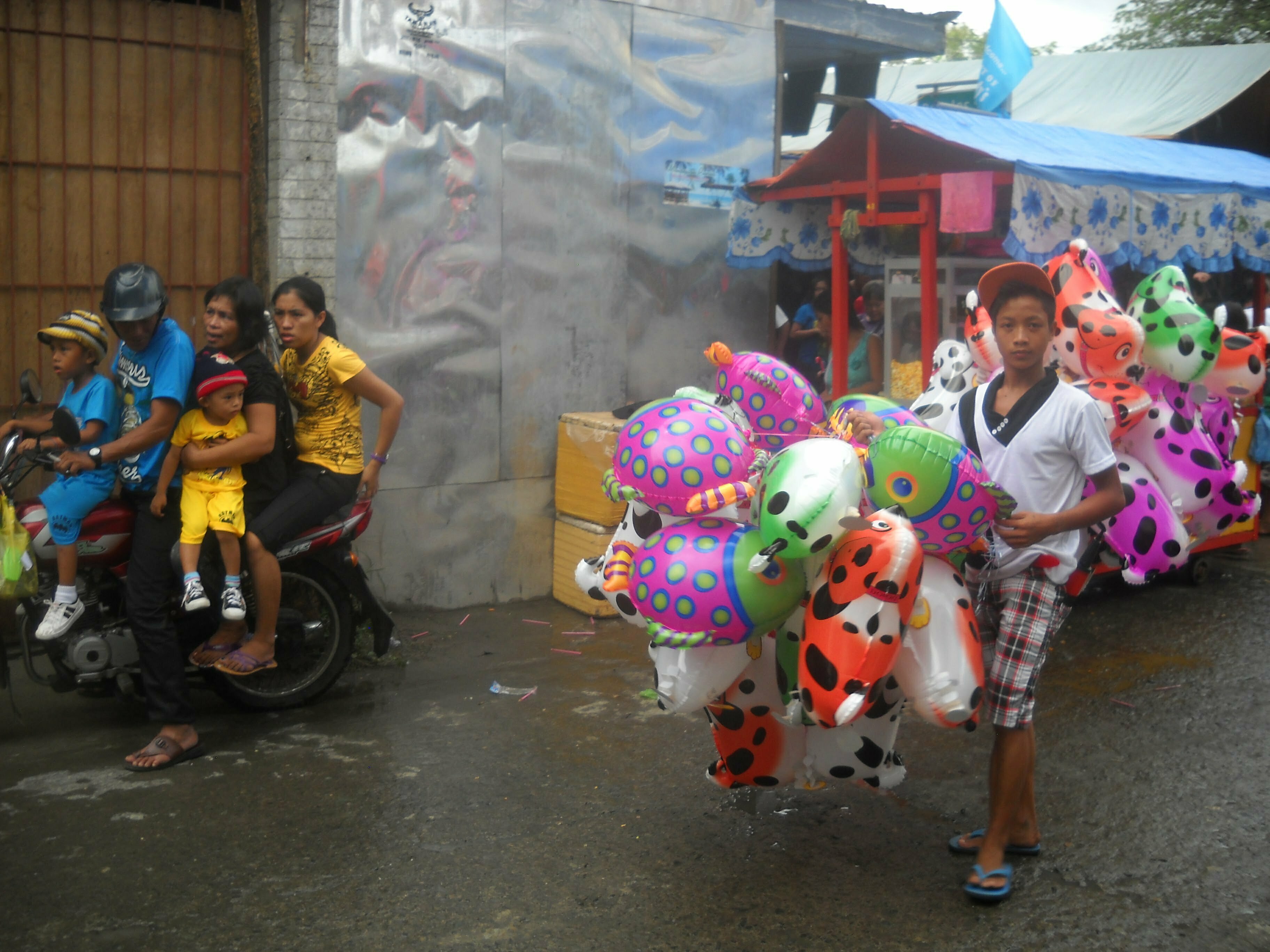 Balloons and a Motorcycle built for 6

Oh hum!  Very boring around here recently, but I believe I can get a respectable post out of the information I have.  I have 5 items on my list and I’ve done posts with only 3 items before.  Of course those 3 items were ones I could expand a lot on and I’m not so sure about these 5.  Of course I can always think of something while I’m typing and …. see just thought of something.  It will be the first thing I talk about in this post.

Still no word from Marlou.  I recently sent him a message on Facebook and am waiting for a response.  I guess I could call his house, just as soon as I get the phone number, but using the phone here still bothers me.  You have to be sure to be calling like Globe to Globe or PLDT to PLDT so you won’t acquire long distance charges.  I’m not even sure that the phone he has at the house is a Globe or if his cell phone is a Globe.  It’s something that I never had to worry about in Texas, so I just don’t think about making it a priority.  I’m sure that when I get my cell phone, I’ll have all the numbers in there.  Most everything is done on cell phones around here anyway.  These people rarely use their house phones, to the best of my knowledge.  I know that I have used my phone, not counting calling for Internet repair service, maybe a 1/2 dozen times in the 2 1/2 years I have been here.  If you include the calls to the Internet repair service than you can add on another dozen.  Regardless of how things are, I still believe that by the end of next week I will have a new power supply and surge protector hooked up to my computer.

In keeping with the computer theme, have I mention that my sound card is the latest victim of the power spikes and surges we get here.  Since my surge protector is not protecting me from surges, my computer goes out every once in a while from one of them.  Now the sound coming through my headphones only comes out in mono, no more stereo.  I get sound out of the left side only.  I’ve tried resetting the computer, looking for a new driver, even deleting my current driver and than rebooting and letting the system find it again.  It did find it again, and it does work, but still only in mono.  I can’t stand listening to things like that.  I can’t listen to any music, because it doesn’t sound right.  I can’t watch any videos for the same reason.  Of course the sound card is built in to my motherboard, so I either have to get a new motherboard or a separate sound card.  I was opting for the second choice and maybe Marlou ended up getting one for me, maybe not.  I will have to find out whenever it is that I get in touch with him.

Again staying along the lines of computers, Titing has finally decided to do his bookkeeping on a computer.  He has been doing it by hand and I guess he finally got tired of it.  Actually, from what I hear, Juvic, Grace and Chatty will be doing all the bookkeeping for him.  I suggested keeping things on the computer about a year or so ago.  I don’t know if he decided to do it because I suggested it or for some other reason.  He probably did it for the reason I suggested though.  It’s easier and you can store more data in less space for longer periods of time.  Now as long as his computer doesn’t crash and he loses all his data, he will be okay.

One more computer related item to mention.  It has to do with the website.  I noticed that sometimes the writing on the feature picture would be to the far left many times.  I also noticed that when it was to the left there was like an extra segment on the top of the feature picture.  Like an extra line across the top.  It was there on the pictures when the writing was in the right place.  What was confusing me even more is that sometimes the writing would be good and sometimes wrong on the same post as it cycled through the 8 featured posts.  I got in touch with my guru Rich and he had it fixed pretty quickly.  It turned out to be my fault, no surprise there, because when I put the name “Guest Authors” on the site, it was too big for allotted space reserved for that category.  Rich just shortened it to “Authors” and it still does it at times, but not constantly.  I’ll let him know that it still does it occasionally and maybe he can get rid of it permanently.

A couple of days ago the wind was blowing hard.  It was blowing the gate to the Pepsi warehouse back and it was making a loud bang.  It was so loud that the vibration from the sound was getting into Lita’s chest and bothering her enough that she had to come in the house.  It was so loud that even Poppa, who is very hard of hearing, told Victor to take care of it because it was bothering him.  Victor just tied the gate down and it no longer banged.  Things went back to normalcy around here.

I found out today that Ramil will be going to Mindanao for work.  I’m not sure at this time if it is a new job or something for his current job.  I know that he does travel from time to time on the current job though.  Supposedly he could be gone for a few months.  I don’t know how that will affect his family.  I know that usually when I ask Robbie (his wife) about him going, she says she doesn’t care if he goes.  I think she does more than she lets on and I know the children will miss him, especially Faye.  She’s a daddy’s girl pretty much, but she is so loveable she can spread her love around to everyone around her.  I don’t know exactly when he will be leaving, but if he is going to go with me to the hotels and restaurants, I suppose it better be soon.

Since my Mother has learned how to use Yahoo Messenger, I get a message from her almost everyday.  She is always checking on us here.  Maybe I should be sure she reads my story on here called Do Not Worry Loved Ones.  She would probably still contact me everyday though.  It’s okay, it’s my Mother so she gets special privileges.

Last item, but an important and frustrating one.  The water is off again.  This is like the 4th time this month it has been off.  It’s only been off about 4 additional times for the entire time that we have been here.  I don’t know what’s going on with it, but I hope the resolve the problem soon.

Reading will get the creative part of your brain flowing and the intellectual part thinking.

2 thoughts on “No Water, Little Sound and Too Much Wind”