[smartads] Okay it’s time to continue from where I left off yesterday.  I believe I left off right after God won his bowling matches against Mother Nature.  Just so you will know, I have been writing like crazy yesterday and again today.  In fact, I just remember something I forgot to write down.  I’m sure I will again end up cutting this off after getting a few pages typed up and have to continue continuing tomorrow.  Of course by then I will  have even more information, so it may never end.  I’ve got like 6 pages I still need to get caught up on and I normally don’t use more than 2 or 3 per post, so I do have some catching up to do.  Actually I’m not going to try to catch up, I’m going to keep going along like this and then I’ll have plenty to write about all the time.  I really don’t mind doing the posts if I have good things to say.  It’s just when there is not much to say and I have to say boring things, I don’t like.  I don’t want y’all to be bored because maybe you will stop reading.  Okay let’s continue. 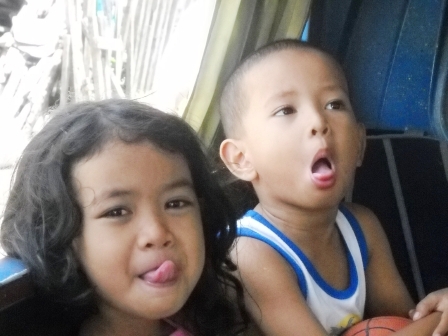 Actually before I get started I’d like to make an appeal to y’all.  I just found out today (real time) that Ado is in serious danger of losing his multi-cab if he doesn’t make his payment.  For some reason, no one mentioned a thing to me until now.  It’s no wonder he is having this problem since his transmission went out and he could not work for a little over a month.  His mother in law sent him enough money to get the transmission fixed, but she just doesn’t have anymore to send.  However I thought I would try to take up a collection for him to ease the burden.  Normally it wouldn’t bother me, but I don’t want his 4 children to run into problems, especially Precious and Casandra. I haven’t told him that I would be doing this, so it would be a pleasant surprise.  So if y’all feel like it, you can donate some money via this website and I promise that I will give him 100% of all monies collected.  I know that everyone out there doesn’t know me, but when I say I will do something, I do may best to get it done.  So when I say I will give him 100% of the money, I mean it.  There is no commission fee or anything like that.  He will get it all guaranteed.  Yeah, sure, Lita and I are stretching our paycheck now too, but it’s more important for them because they have the children.  Of course I’m sure that they will eventually pull through, but I’d like to make it a bit easier for those babies if possible.  Thanks for considering. 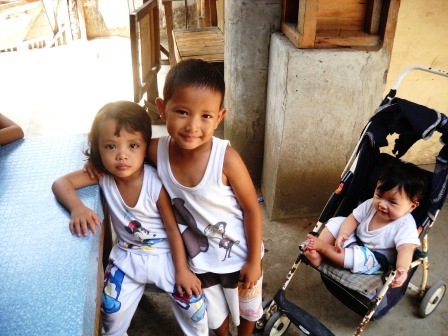 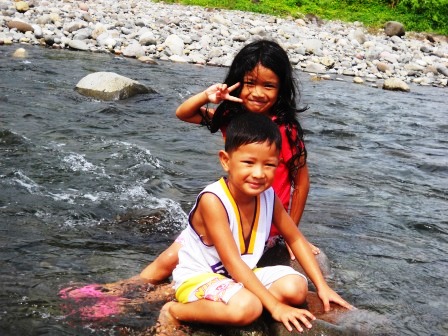 Okay so NOW let’s get on with the rest of my little adventure.

Judith, Juvic and Grace were all here Wednesday night.  Actually Grace had been here all day because she spent the night on Tuesday.  Evidently her, Neneng and Ramil were all drinking last night.  From what I hear, they only had 1 bottle of The Bar tequila, but both Neneng and Grace got drunk.  I’m sure Ramil didn’t get drunk on what the leftover of that was.  I’m not sure what they were mixing it with either, but whatever it was, you can bet it was a Pepsi product.  I know that if I would have been there, I would have wanted the Tropicana to mix it with. 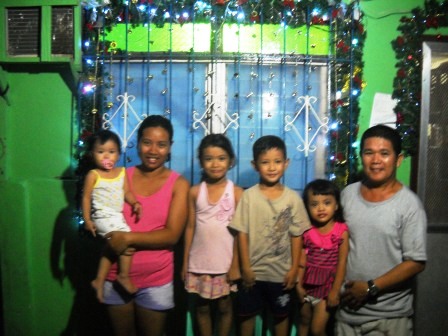 The store (LolyKat) is already better organized then it was before.  In addition to most of the items being marked on the product itself, it is also marked at the location where it is on the shelf or where it is hanging.  We will just keep putting the product at the same location and soon we will have that location memorized and the price of it also.  Prices don’t change too much here, but it they do, it’s easy to change what we have marked.  Also when I’m in the store I usually have the door locked when the children are running around.  Actually we have a curtain hanging on the door so no one can see inside through that back door, unless I raise the curtain.  Well they could move the curtain, but the smaller children can’t reach it.  I try to keep everyone out, except Lita, when I’m in there.  Less people running around means less chance of a mistake happening.  If a mistake does happen, well I won’t be able to blame anyone except myself (or Lita).  When someone eating wants a drink or something else from the store, Vicky and go to the side window, order it, pay for it then receive it through the side window by the food display.  There is also an opening in that back door I was talking about and of course the front window facing the highway. 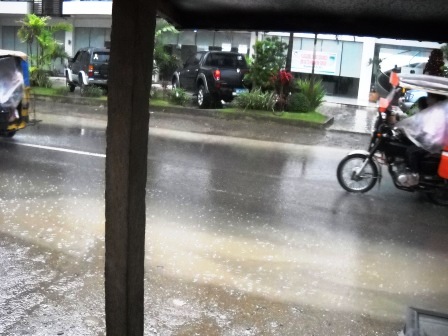 And the rain just keeps coming down

At the moment of writing this sentence on Wednesday night, I am sitting in a pretty well stocked LolyKat.  I just finished a list of things I need to do tomorrow after I get my money from the ATM.  I should pay some bills and go shopping, then probably take a tricycle home because I’ll have things to carry.  If I didn’t have anything, and I’m not too tired, I have been known to walk the mile or so home.  I’m suppose to be going downtown alone, so I made that list up.  When Lita is with me, I can’t do a lot of the things that I’d like to do.  She’s  not in to walking all over town and I don’t like to ride within the downtown area because it’s better for me to walk.  She will be going downtown alone early in the morning anyway to shop for the little eatery we have.  The money most likely won’t be in the account until somewhere between 2 and 4 tomorrow afternoon, so I’ll have to wait. 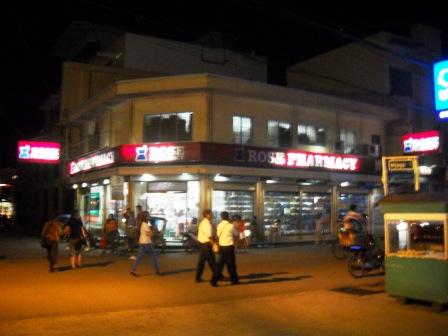 You know I don’t mind sitting out in the store so much, as long as I have something to keep my mind busy and a working electric fan.  I still think that we lose out on a little bit of busy when a customers sees that I’m the only one in the store, they sometimes don’t want to deal with the language thing, and they will just leave.  I was asked if that bothered me and I answered, “Not in the least”.  If they don’t stop by to buy something it’s not a problem for me.  We now only have things in the store that are known to sell, so whatever is there will sell.  Maybe it won’t be to that person, but to someone and soon.  Now if Vicky is outside in the food area, then they sometimes ask her.  That’s okay with me.  Whatever it takes to get the message across.  At least they are trying. 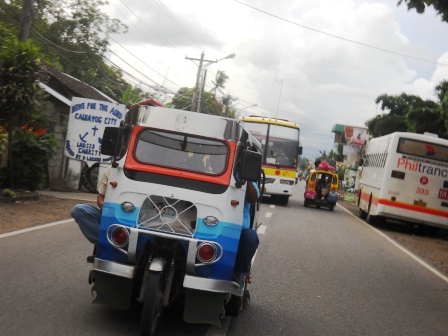 Tricycle behind us on way downtown in a tricycle

We have decided that the LolyKat hours will be 0800 to 8:00pm (Monday – Thursday), 0800 to 10:00pm (Friday & Saturday) and we will be closed on Sunday.  Of course if you come by outside of those hours and someone just happens to be outside, then ask, most likely we will get you what you want if we have it available in the store.  Yes I mean even on Sundays and even at midnight or 0300.  As long as someone is outside, there is a chance you can get what you want.  Now normally after midnight or maybe 0100, no one is out there, but it could happen. 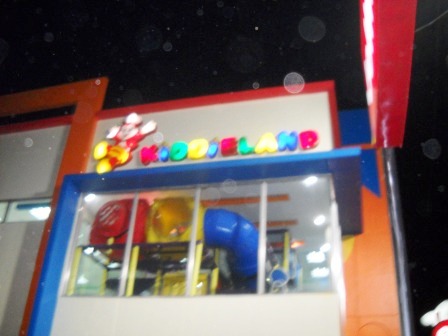 KiddieLand over the top of Jollibee in Calbayog

I sure wish we had enough money to buy another refrigerator, a large frost free one.  When we finally do get the money, I will have that small one we have in the kitchen now moved out to LolyKat.  I don’t like having to come into the house when someone wants ice, ice water or ice candy.  I really don’t like leaving the store unattended.  Plus I also don’t like a refrigerator that is not frost free.  I made the mistake of not insisting on getting a frost free when we purchased that one.  Besides those 2 refrigerators, I will also be wanting a smaller one to put in the computer room, so I can put my water, soda and beer in there.  It tends to disappear in the only refrigerator in the house, especially my water. 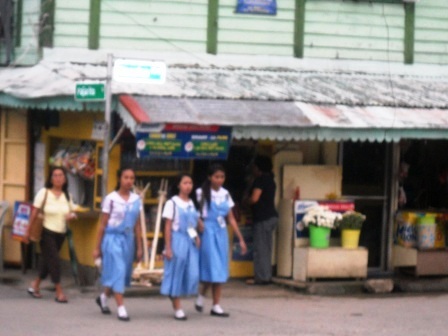 Useless Knowledge:  Adolf_Hitler’s favorite dog, Blondi, an Alsatian, was used to make sure his cyanide capsules were lethal.  Hitler used the cyanide to commit suicide when he saw it worked on Blondi.

Well the 100 Days to Summer program is over.  The last few shows were filled with all kinds of twists and turns, including a battle between an angel and the devil.  There is a new show that I am watching now that has 2 of the children from 100 Days, plus one of the adults from that show also.  That adult only lasted 2 or 3 shows before he was killed though. The name of the show is Ikaw ay Pag-ibig, which I believe basically translate to “You’re in Love”.  It’s a Christmas program.  Christmas starts in September in the Philippines so we get to hear and see things relating to Christmas about 4 months out of the year. 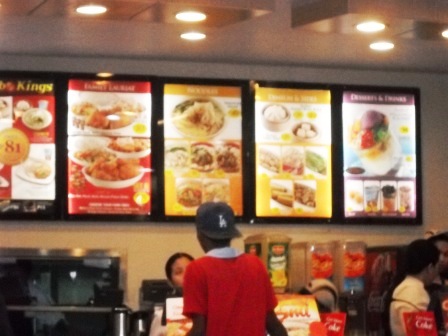 Part of the Chow King menu in Calbayog

Okay, that’s about 2 1/4 pages of notes typed up, plus a few more tidbits I thought up.  I guess this is a good a place as any to stop for the evening.  The post tomorrow will be on some of my experiences while I was being a store keeper, whether or not my check makes it in and I finally found out the name of that little grocery under the Almira Garden Hotel.  I will reveal all that information tomorrow.  Stay tuned for that information and please think about the donation for Ado and family. 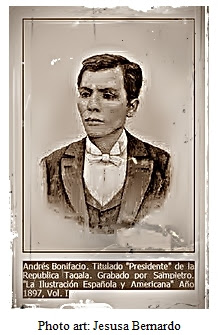 1863 – Future Filipino revolutionary supreme leader  and unacknowledged First President (revolutionary  government) Andres Bonifacio y de Castro, is born  in Manila, the Philippines during the Spanish  colonial period; born to Catalina de Castro, a Spanish mestiza, and Santiago Bonifacio a tailor who serves as a teniente mayor (municipal official) of Tondo,  Bonifacio is the eldest in what would be a brood of  four boys and one girlwould who become orphan at  a young age; the future “Father of the Philippine  Revolution” against Spain would self study and  support his siblings by engaging in the family business of selling fans and canes before helping establish the  secret society Kagalanggalangang Katipunan  nang  manga Anak nang  Bayan (KKK) and ultimately turning it  into a revolutionary governmentfollowing its  premature discovery in the latter part of 1896.Raw Photograph: Museo Villalolid Site

1749 – Sultan Ali Mudin (Alimuddin) of the Philippine island of Sulu expresses his desire to be converted into a Christian Catholic during the Spanish colonial era; a commission is then appointed  by Spanish colonial Gov. General Juan Arrechederra following the consent of Manila Archbishop Msgr. Pedro de la Santisima,  for  the task of instructing the Sultan as to the tenets of  the Catholic religion; the sultan’s expression of desire to be baptized a Christian comes amidst the coup staged by his brother against him following Ali Mudin’s forging of treaty with the Spaniards, provisions of which include acceding to the demand that the sultan prohibits allowing foreigners to reside in his dominion without knowledge of the Spanish authorities.. 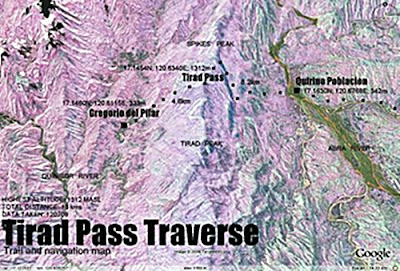