[smartads] This post will not be very long, so if you are pressed for time, I won’t be taking up too much time here.  I hope it is interesting for y’all though.

It seems I pretty much wasted my time making the punch.  I think I was the only one that really drank any.  I’ll admit that it wasn’t my finest punch, but that is because I’m not use to the things I had to use as a mix here, plus the vodka was a low grade brand.  It was still pretty good though.  It would have been better cold, but there is ice for that.  Even the punch for the children didn’t get drank.  They sure did drink a lot of soda though.  When the party was over, I just combined the 2 punches, poured it in empty bottles and put it in the refrigerator for later consumption.

I’m not sure if I will ever attempt to make something special for a party again.  I think that I will just make it for me and IF they want to taste it, I’ll let them, but I will not try to get them to try it anymore.  They are always trying to get me to try Filipino things, even though I repeatedly tell them I do not like it, but they also do not often try something I make.  I think that the food culture is just clashing too much.  I’m most likely going to just stick to what I like and let them ask me for a taste instead of trying to change their ideals. 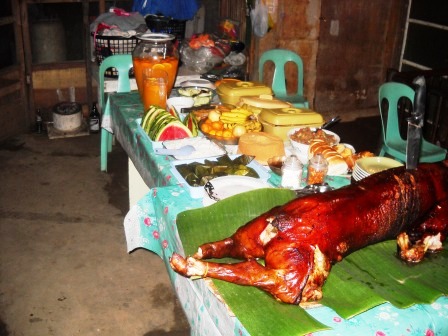 I got up this morning at a little past 10:00 and made pancakes.  I told you that I’ve been missing them.  I walked to the patio in back and several people were already drinking.  They were not drinking the punch, but they were drinking one of the cheap rums they have here, Matador or something like that.  I still feel some of the effects of the punch so I probably won’t drink alcohol for a few days. 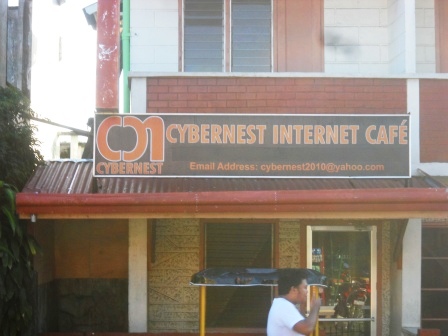 I tried to do pretty much nothing all day today except working on the blog and I was pretty successful.  I did vary a little when I took a nap though.

For dinner tonight, around 5:00pm, I did something different again, just to see what it taste like.  I peeled and cut the last 2 small potatoes, the I fried them up.  I added some onions and peppers to the mix before the potatoes were too cook.  While that was cooking, I took the leftover roast chicken from the refrigerator and pulled the meat off the bone.  I further got that into smaller pieces and added that to the mix also.  After a couple of minutes, I turned it off and made 3 sandwiches with the mixture.  I wanted to put tomato on it, but I was out.  I just added mustard and went with that.  It was good enough to make me want to try it again, maybe with the tomatoes next time.

I see that Calbayog City now has their own blog at www.skyscrapercity.com/showthread.php?t=1474563) at skyscraper.com.  I wonder if it’s due to me calling and letting them know that I don’t think Calbayog City is represented on the Internet well enough?  I’m glad they started it and I hope that it does well.  I noticed that the very first 2 pictures on the website are from this blog and the very first link on that site is to this site.  Maybe working together we can let the rest of the world know just how wonder Calbayog is.

Useless Knowledge:  The Goliath of Africa has a huge armor that makes it the heaviest flying insect in the world. In fact, it weighs more than eight mice and is a common pet with African children, who fly it from a string.