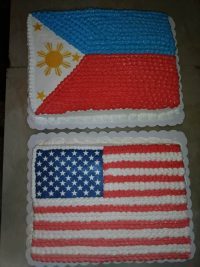 Tidbits of information today, plus how are 4th of July party went.

I’ve noticed that here in the Philippines, or at least here in Calbayog, that kids can go to whatever school they want to.  It doesn’t have to be within your district.  I thought that interesting because, unless they changed it in the US, it is not that way at all.  The school you must go to is dictated to you.

Soon, when I have a little bit of extra money, I need to buy regulators for each of our refrigerators and our freezer.  I need to try to help preserve them from the constant power surges and outages.  I understand that they do not cost that much, but we still have a payment left on our new TV and since our freezer died on us, we had to get a new one.  So, all the extra money is going to those right now.  The freezer only has 5 payments left, but we still need to save something for our trip to Texas in October.  It’ll be tight until then, but we’ll be good after we get back from Texas.

I had some happen that has not happened to me before. My retirement check is supposed to come in on the 1st of every month unless it’s a weekend when it comes in the day before.  Well for Monday 1 July, the money was in the bank on Saturday 29 June.  It would be nice if that happened every month that the 1st is a Monday, but I’m thinking that it was because of the upcoming 4th of July holiday and it won’t happen again.  Beginning next February I’m not going to worry about it though.  Any day my check comes in will be fine then.

Speaking of 4th of July, we had a great party for it.  It was at the French’s house and we had a good time.  There was a live band, fireworks, a chili cookoff, good food, good company and cold beer.  Unfortunately, there were only 3 entries for the chili cookoff, but I was one of them.  It’s the first time I’ve made chili, by myself, in many years.  There were 19 judges (the guests) and I got 7 of the votes.  The winner got 10 votes.  All the chili was delicious though.  It was all gone by the end of the party.  I’m glad I left a little at home for later.  For the next chili cookoff, probably next 4th of July, I already know what I will do differently.  It won’t be much different though because it did come out pretty dang tasty.

I had a problem with the internet again.  I called Globe and scheduled a maintenance visit.  The next day the internet was working great again, no Globe showed up.  I called to cancel the visit like I’m supposed to but, just like I figured would happen, they showed up about an hour later anyway.  They had no clue that I had already canceled.  They are not known for good communication between the offices and the maintenance crews around here.

It seems that a puppy has adopted Neneng.  A puppy got hit by a passing center car (big trike) and came running into our area.  He ran to the back and hid behind Neneng’s washing machine.  That pup was there for 3 days without leaving.  Neneng fed it and now that he can walk around again and is brave enough to venture out, he follows Neneng & Titing around (like a puppy).  He’s a pretty good dog, but just like any puppy, needs to learn a few things.  Things like the big cats around here are not for playing with and move out of the way when the people are walking.

Lita now has 4 cats she lets in the house.  Of the 4, only 3 of them will let you touch them.  The big one, we call Whitey, will not let you touch him.  He’s the noisy cat and drives me nuts.  He’s scared of me though.  Most of the time he sees me, he runs.  I don’t mind him except for that damn loud pitched meow he has.  Plus he likes to beat the crap out of the little ‘special’ cat we have.  I call him ‘special’ because I think he has something wrong with him.  He doesn’t act like a normal cat.  The 2 smaller kittens are sisters, although 1 is about 50% larger than the other.  By the time we get back from Texas, they will both need to be spayed.  Since it’s free, we will neuter the ‘special’ cat too.  I think Neneng will take the dog there also.

In my next post, I will let you know about new things with my computer and how it came to be that way.   I had a lot of help getting it to work and look better.