[smartads] As you may have noticed, I missed doing a post on 3 Dec and 4 Dec.  I have plenty of information, but I was in no condition to be typing on the 3rd and on the 4th I started the post, but got distracted and never got back to it.  It didn’t hurt me to take a little break from typing anyway.  I’m still adding to the notes and I have about 5 pages of them right now.  That’s at least 2 days worth, but by the time those 2 days are up, I will have 2 more days of information. I know that someday I will have a super slow day and it will all get caught up, but in the mean time, I’m going to keep on typing. 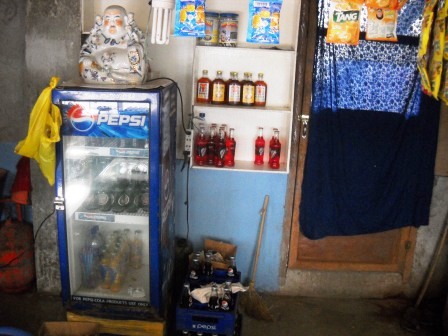 Back of LolyKat from inside.

When Lita and I get ready to go to Cebu for her social security, which looks like it will be February right now, Mar will be assisting us in locating a decent  hotel close to the Waterfront Hotel (where the Social Security Office is).  We can’t afford to stay at the Waterfront, but I want something nice that’s relatively close to there, so we can walk or have only a short ride to the office.  I think I’ve got one figured out but I keep forgetting to ask Mar of his opinion of the one I found online.  I ask Mar’s opinion because he has been to many places in Cebu, including hotels.  That is why for our MJ Services, I try to get the customers (which I’m not doing a very good job of) and after I find out the customer needs, he will come up with an itinerary to suit those needs.  I figured that as long as we were in Cebu anyway, we might as well spend a couple of nights there.  We want to check out a mall there besides SM Mall because we have been to that one a few times.  I wish they had a Subway there, but from what I can find out, all 13 Subway locations are in Manila.  I hope I’m wrong on that and find one anyway.

It’s Friday morning now (2 Dec).  Lita woke me up at 0801 to go out to the store to watch it.  There have already been several customers for the store and the eatery.  I sat out there and tried to play Yahtzee, but it’s a stupid game.  Think believe I have mentioned that once, twice or a dozen times already. 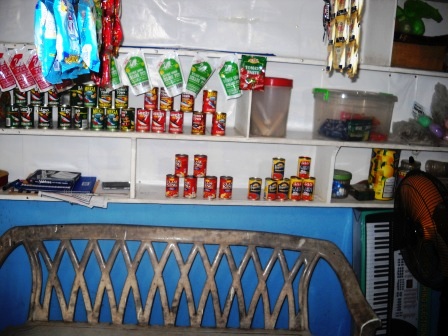 Left side (outside facing in) of LolyKat

Most of yesterday and already a couple of times this morning the vans (mostly Grand Tour) have been dropping people off at the Ciriaco Hotel.  As I look over to the lobby now, it is pretty crowded.

Someone that works for the Ciriaco commented to Lita that the pancit here is better than the pancit at the Elsa Cafe (Ciriaco Restaurant).  That doesn’t surprise me.  I’ve been saying for years that my wife is an excellent cook and I’m sure she has shown Vicky a few tricks too. 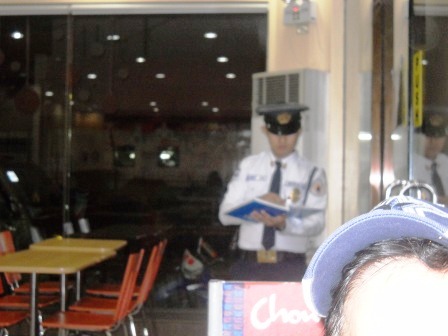 I don’t know if this is a standard thing and I’m just now noticing it, but one of the guys checking out of the Ciriaco was hailing a tricycle out in front of LolyKat.  People leaving the hotel going downtown often seek shelter from the sun or rain under our over hang, waiting for tricycles.  What I noticed about this guy was that when he put his hand up to hail the tricycle he also indicated, with his fingers, the number of passengers that were waiting to ride.  I think that is a good idea.  Sometimes when a tricycle pulls up, you find out too late that there is not enough room to accompany all the people you have with you and that just wastes everyone’s time, yours, the drivers and the other passengers.  I think I will do that next time I hail a tricycle.  I’m just wonder if I should count myself as 2 though, since I’m so much bigger than the standard passenger.  I guess not though because I have seen some Filipino guys bigger than me.  I haven’t seen them here, but I did on TV. 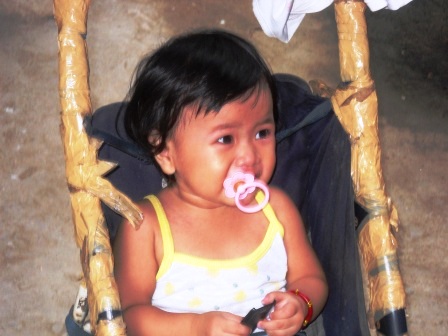 The mustache I shaved has grown back in even better than before.  I am even more guwapo (handsome) than I was before, but that’s not so difficult of a task to accomplish.

Jascyl stopped by for a time today.  I guess she just came to see the children because that all I saw her doing was playing with them, especially Casandra. Maybe she was just visiting or maybe she was trying to get her job back.  She ain’t going to get her job back right now, at least not with Ado and Cathy. They are having a rough enough time ever since his multi-cab went down for a month.  They have been eating a lot of only rice and dried fish recently, but I try to slip the kids some thing else at times.  Ado has been leaving the house around 0300, instead of 0400, to get in line for the customers at the wet market downtown.  He wants to be at the front to get the first customers of the day, then he can return to get more after dropping them all off.  You never know, that extra P200 ($5) could come up handy during the day.  He just sleeps in the multi-cab until the customers start to show up, then he assists them if they need it. 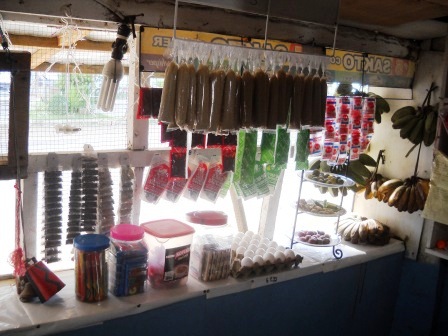 Since I mentioned sleeping, at around 10:30 that’s what I went in the house to do.  I laid down and slept until noon, when Lita came in to wake me up to go back out to LolyKat.

The propane finally ran out.  This tank lasted for about 2 months though, so I’m not complaining about that.  I wish they all lasted as long.  They were only lasting about 4 weeks.  This time we bought a lot of small bags of charcoal and have been using that out in the dirty kitchen.  I want to buy a large bag of charcoal and put it in the store.  It would be for our use, not to sell.  It is just safer in the store so other people here that use the dirty kitchen, won’t also use our charcoal, without asking first at least. 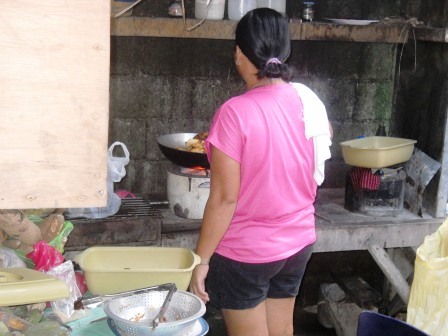 Vicky at the dirty kitchen

I finally got to eat today, although it was just a couple of peanut butter sandwiches.  It was around 1:00pm.  After eating I did a quick check on the computer for my mail.  I wanted to check for comments on here, but Lita was aching and wanted to lie down.  That leaves me for being in the store.  I’m full and the fan is working well, so I don’t mind sitting out there for an hour or two.  I’ll just bring my reading glasses and try to do a few of those puzzles.

At 3:10pm Lita came to relieve me in the store.  I headed for the computer after a quick CR break. 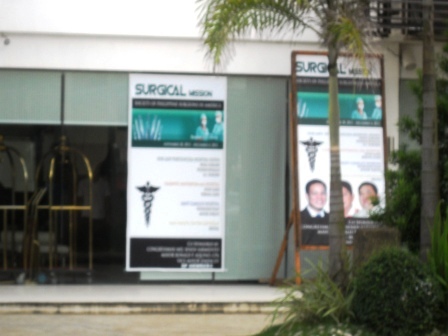 It was basically a pretty uneventful day on Friday.  That evening while I was watching LolyKat, some children that were visiting next door came by.  Once they got up enough nerve to start talking, I didn’t think they were every going to be quiet.  One of the little girls (there were 4 girls and 2 boys) is the granddaughter of our neighbor.  The adults were out by the road in chairs having a discussion.  That is a common thing in the Philippines, but normally it’s in the smaller out of the way places.  I gave this little girl 2 nicknames (I can’t remember her real name).  The first nickname is “Miss Hershey”, because she said she likes and has Hershey chocolate.  The other nickname is Baby Bear, because that’s what she looks like, a cute little bear (without all the hair).  She likes the Baby Bear nickname better.  The other kids promptly got the nicknames of Mama Bear, Poppa Bear, Sister Bear, Brother Bear and No Name Bear.  I didn’t name them, I was just there.  Baby Bear seemed to be the only one that knew the story of Goldilocks and the 3 Bears.  Not to be confused with the Goldilocks bakery. 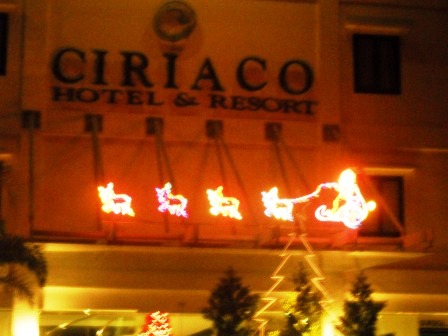 Although it is Friday, I closed the store at 8:00pm.  Mostly because I forgot it was Friday and were said we would stay open until 10:00pm.  I remembered a few minutes after getting back into the house, but I had already closed and shut everything down, so I wasn’t going to reopen and start it all back up again.  Tomorrow night I’ll stay open until 10:00pm like we planned it.  Of course I plan to be doing a lot of Red Horse beer drinking on Saturday night.  I might even buy a bottle of that The Bar citrus tequila.

Okay, this is a good place to stop for this post.  I’ve still got 3 pages of notes and I’ll probably be adding to that pretty soon.  It’s almost my turn to sit out in LolyKat and I’ll bring my note pad with me so I can write down what I see and think about while I’m there.  That should be good enough to add 2 or 3 pages of notes. 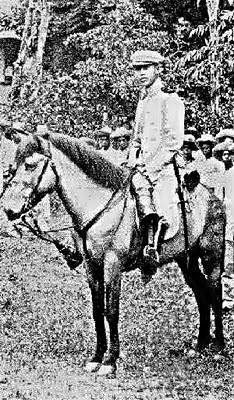 1899 – Filipino boy-general Gregorio del Pilar y Sempio, along with many of his 60-man rearguard is killed by enemy invading Americans in the Battle of Tirad Pass in the mountainous terrain near Candon, Ilocos Sur; the Battle is meant to allow Gen. Emilio Aguinaldo, head of the fledgling Philippine Republic, to escape further to northern Luzon through the mountains; the massacre perpetrated by the 500-man 33rd Infantry Regiment under United States Major Peyton C. March comes amidst the imperialist American pursuit of Aguinaldo in the bid to crush the Philippine Republic government during the protracted and bloody Filipino-American War (1899-1914).
Photo credit:  http://arcticboy.arcticboy.com/picture-of-gregorio-del-pilar 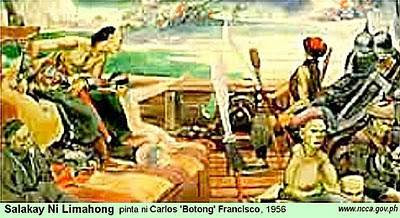 1574 – Chinese warlord and pirate Limahong leaves  Manila northward for the province of Pangasinan, establishing a kingdom near the mouth of the Agno River in the southeast Asian islands of the Philippines after  having been foiled in his plan to establish his own kingdom at Manila; Limahong, who managed to  become leader of some two to three thousand pirates and commandeering  as much as 95 ships  and has been wanted by the Chinese authorities;  Limahong invaded the northern Philippines a year earlier to escape the pursuing Chinese authorities,  first settling in Ilocos Sur before later attempting to invade  the relatively new and unprotected Spanish colonial  settlements in Manila.