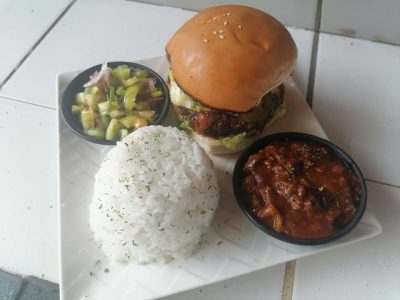 It’s Thursday, November 4th and it’s a pretty nice looking morning. The rain has stopped, at least for now and everyone is busy doing their normal morning routines. Nening is busy as usual, running errands. Before 9:30 this morning she has made 3 errands. One to pay the electric, one to buy a native chicken and one to buy pork. If she would have known about all of them at the beginning of the day, she could have done them all in one swoop. But, alas, they were all separate errands for my wife.

I was opening the aluminum door with my foot the other day and when I walk through the door closed a little bit and I scrapped the crap out of my arm. I’ve been taking care of it and it looks a little better. You really did not want to see the arm when it first happen. It really scrapped it good. There was skin hanging down and blood oozing out all over my arm. I had to apply pressure with several napkins, several times. I finally got it cleaned with some alcohol (that hurt) and Nening put a couple of band-aids on it for me (Lita was sleeping).

We get children that come by maybe 3 or 4 times per month, selling sacks. They are large sacks that we mostly use for the trash but occasionally for other things. I have no idea where they get the sacks and they only ask P10 ($0.20) each. I figure it’s better than them begging, although they may do that also. It reminds me of when I was young and used to look for empty soda bottles to sell back to the store. That was only .03 or .05 depending on the size of the bottle. I’m glad that they are doing something to ‘earn’ money rather than to depend on begging.

It seems that while I was typing this entry, the website crashed. My new host is on it already though so it should be back up soon. I’ll just keep typing and drinking my coffee. See? He fixed it already. I barely had time to finish typing my sentence. He’s already planning to upgrade his site so he can provide better support to all that he is the host for. So far I’m so glad that I decided to switch to him as a host.

I’ll be heading to Mango in a couple of hours (around noon). I’ve got a burger scheduled for 1:00. I’m trying my new thing again, no bun. If it helps lose weight then I can handle it. Christian will be providing me non-fried sides today, and probably from now on. I think it will be mac & cheese and baked beans today.

I just returned from Mango with some BLTs that my wife ordered. She only ate half of one. I ate one and a half. Both on buns and both very good. I can’t see eating a BLT without the bread/bun so that didn’t happen. I think I will have to change my hamburger order to 3 pm instead of 1 pm though.

Back from my nap. It’s raining again, and raining hard. I had to delay my burger again until later. I’m waiting for Nening to get back from grocery shopping. Lita has a headache and is sleeping so I get to stay here and watch for potential people buying ice or charcoal, which we sell here. I really should get that burger ordered before 4:00 pm because that’s when burger day officially ends. It’s only noon to 4 pm each Thursday. It’s only about 2:50 pm right now so one way or another I should be able to get it ordered within the time limit. Or maybe he’ll let me slide since I kind of sort of ordered it already.

I just returned from Mango again. I had my burger. The 2 patty Mexican Wave (the 1 patty Mexican Wave is the feature picture except I get mine without rice). It was supposed to be without the bun but I changed the time to get it twice and by that time they forgot. So I had the bun. I didn’t eat all the bun though, maybe 7/8 of it. I had chili and mac & cheese as my sides. I also had 3 San Miguel Pilsen’s while I was there. Before I left I went next door and placed an order for an Uncle J’s Chili Cheese Pie (named after me because it was my idea to have it on the menu) for my wife. She doesn’t plan to eat it until around 10:00 pm so they are going to delivery it on their way home. It will be more fresh that way. They usually close around 9:00 pm. I didn’t have to but I paid them an extra P50 for what I considered a “special delivery” even though our house is on their way home.

This entry seems more like a diary entry. Are you readers cool with that? Or would you rather me just post important things? The way I’m looking at it is that you never know what will be important to someone. Someone’s senseless talk could provide important information to someone else. Just like “One man’s trash is another man’s treasure”. I just posted an entry today and I was thinking of just posting this one in 2 days, but I’m not going to wait that long. I’ll have it post tomorrow afternoon, 1 pm, my time. I will get started on a new post tomorrow.

Also I was wondering if you like this type of entry or the ones with the black background and white letters better?