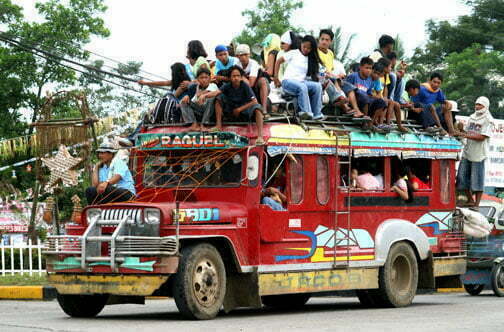 Riding in the local jeepneys is the least expensive way to travel the longer distances around here.  It’s not always a pleasant trip, but normally it’s not so bad.  I have not ridden on a jeepney in quite some time, several years in fact, but on the 26th of July of this year, I did.  There was a party way, way on the other side of town at a friend’s house and it was a friend’s party that I just had to show up for.  This friend, Pete, has been very nice to my wife and me since we’ve known him and I thought it would just be rude not to show up.

Several of us were going to meet up and travel there together, but due to other circumstance, it didn’t turn out that way.  Half of the people going got sick with the little bug we got going around here.  I arrived at the jeepney station alone.  I was waiting on 2 people, Steve and his wife Marlou.  The ride to the barangay where he lives takes approximately 45 minutes to an hour to get to.  It was an early party and it was determined that to get the best and the freshest food, we should arrive by 10:30 am.  Our plan was to leave no later than 9:30.  Of course, it didn’t go as planned.  Steve and Marlou were late.  I told them that I would not wait past 9:30.  I actually could have gotten a free ride to the area, but I opted to wait for them because they have never been to San Joaquin before.

The jeepneys, I was told, were supposed to leave every 15 minutes.  They do if they are full.  If they are not full, they wait until they get at least almost full.  The next jeepney did not leave until 10:30.  It was just about time to leave when Steve and Marlou showed up.  The jeepney was mostly full, but it wasn’t too bad.  We ended up picking several people up along the way and it eventually got full.  I can handle that.  I was stuffed in there like a sardine, but it’s okay.  Then we stopped to pick up some construction material.  They placed that on top of the jeepney.  Two more people got on.  The helpers (hanging on the back of the jeepney), pulled out a little bench for them to sit on.

Then we stopped to get some tires.  They went on top also.  Two more people got on and another little bench appeared for them.  Now there are 4 people sitting in the aisle making it even more crowded.  Then a couple of teenage guys also jumped on.  They were hanging off the back with the helpers.  To this point, no one had gotten out of the jeepney.  As we went along, two young ladies decided they wanted to ride.  No more benches for them, but the helpers did pull out a thick board and laid it across 2 metal supports on either side of the doorway.  The girls sat there.

I’m thinking that, when I got on this ride, it was going to go straight to San Joaquin.  I mean we were already going to be at least 45 minutes late.  As we go along, finally a couple of people reached their stop and departed.  Of course, it was a couple of people that were sitting up-front and had to wade through everyone to exit.  We had a little more breathing room.  Naturally, when those people got off, three more teenage boys jump on and hold onto the back.  So now there are 7 teenage guys hanging on the back of the jeepney.  I’ve got a little breathing room but my knee is in the back of this little boy who is on there with his mother.  I had to keep adjusting my legs.

Oh, I should also mention that we were told by Pete to get off at a store named RJ’s.  No one knew where that store was.  Supposedly it was on the left side of the highway, but when they let us off at RJ’s, it was on the right side.  There were actually 2 stores close to each other with the same name. We texted Pete to send his driver to pick us up, but no answer.  We took a tricycle to go there, but none of us were really sure where the house was.  The driver said he did, but he didn’t.  He got lost and after talking with several different people we finally found the right way.  In fact, as the driver was asking the last person where to go, I just got out of the tricycle and walked to the house.  I remembered where it was when I was that close.  Steve and Marlou followed in the tricycle.  Pete did pay for the tricycle ride though since he felt bad that he missed our text.

Everyone there was already finished eating.  There was still plenty of cold beer though.  After that trip, that’s the first thing I went to get.  A nice cold San Miquel sure hit the spot.  I finished half the bottle and then went to get my food.  I did meet a couple of expats that I did not know before.  Right now I couldn’t tell you their names again, but I’d recognize them if I saw them around.

We stayed there for a few hours and I was getting worried that the ride home would be just as wonderful as the ride there.  As it turned out though, we didn’t have to worry about it.  Pete decided to take us home in his car.  I told you, he’s a nice guy.  Steve and Marlou live way far from the party, but Pete said he’d even bring them home.  We stopped by my house first to bring some leftovers to my wife, but I went back out and rode with them to Gandara for Steve and Marlou.  Actually, they were going to come back also, they just needed to get some medication and drop off the food they brought home.  It was a lot of driving for Pete, but I didn’t hear any complaints.  They dropped me off at my house again, then Pete dropped them off at Grand Tours Van Service for the remainder of their trip.

I sent a message to Pete later to make sure he got home okay and he did.  He stopped off to buy a couple of pizzas to bring home, so it was a while before he got there.  I was starting to worry, but it all was good.

Our next party on 3 Aug is a lot closer to our house.  It is actually in the downtown area, so it will not be a problem getting there or returning.  I don’t know of any more parties after that one, but I’m betting there will be one sometime in the not so distance future.  I’ll have details on the 3 Aug party in my next post.