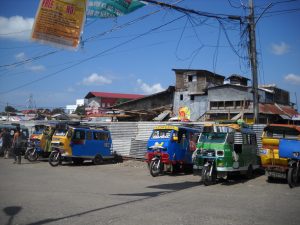 Jun and most of his family came for a visit today (15 May).  They didn’t stay long and I’m not even sure why they were up here from Tacloban.  It was good to see them though.

Lita went downtown today by herself.  She had an usually experience that I’ve never heard about since I’ve been here.  She said that none of the tricycle drivers would give her a ride.  She kept trying to flag them down, but they would just wave her off.  She obviously was pretty pissed off about that and claimed that they probably didn’t think she could pay them.  I don’t know what the deal was, maybe they were still feeling rich from all the election money they got.  I thought about setting up a sting operation.  I’d have Lita trying to get a ride and every tricycle that refused her I would write down their trike number.  Of course I would have to be away from her to do that.  If they see me with her, they will pick us up, you know, since they think ALL foreigners are rich.  I would report them to city hall and also publish their trike numbers on this blog and on Facebook.  Of course that’s just me thinking and talking again.  I’d have to be really pissed off to actually go through with that operation.

On the 16th of May I went out in the sun 3 times to test the theory that the marks that appear on my arm are due to the hot sun and my blood being thinned out from taking aspirin everyday.  Today it’s been exactly 1 week since I had any aspirin.  I received no marks on my arm the entire day.  It was suggested that the thinning of the blood combined with the sun and being an older age is what is causing the problem. Well I can’t do anything about getting older (unless I die), so I went the no aspirin route.  I’ll be testing this theory for 3 days, the last day making an extensive test.

I finally got to see Khan Khan before they left to go back to Southern Leyte.  On 17 May they stopped by before they left.  As his ninong (godfather) I thought he looked well.  He hasn’t grown much, if any at all, but he looked good and he was happy.  Those things are far more important than height.  Lita (his ninang) gave him some money for the couple of birthdays that we missed while he was gone.  We already gave some to Cassandra, our god daughter and his little sister, the last time she was up here, which was last month.

Also today I ventured out into the sun 3 more times today, still testing my theory.  Still no marks.  Tomorrow I will make the final test, taking a longer walk, instead of just walking along the highway in front of the house.  Stay tuned for tomorrow when I have that final sun test.  If all goes well, then I’ll next have to determine how long an aspirin stays in my system.  By determining that I can calculate when it’s safe to go out in the sun without fear of getting marks.