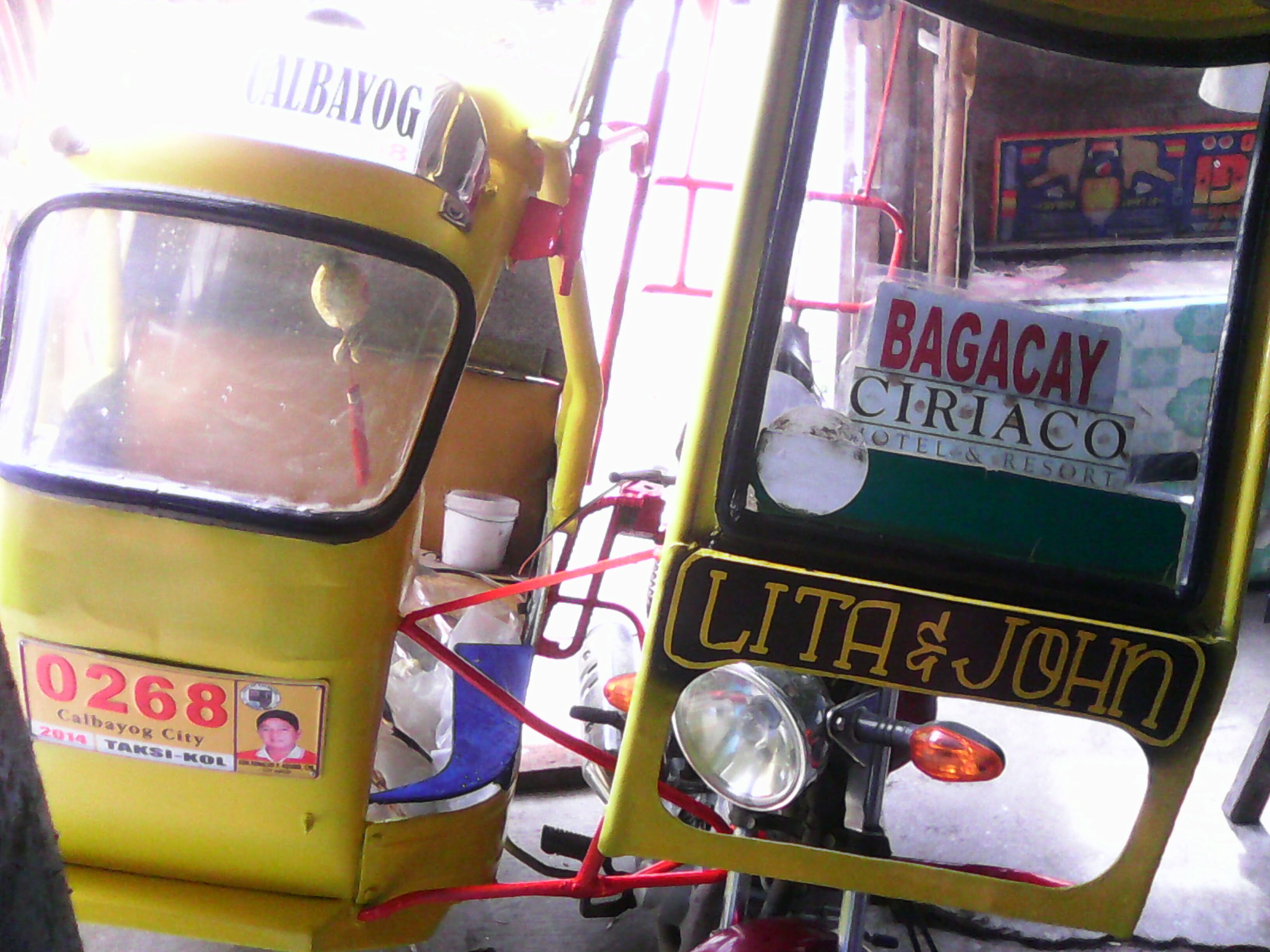 Front of our newly painted tricycle

In my last post I mentioned that I was slow about getting the latest information out.  Well I have not improved, in fact I think I have regressed a bit.  It’s been 10 days since my last entry, which is too long for at least 2 reasons.  The #2 reason is because it hurts my Google rating if I post so infrequently and the #1 reason is because I deny y’all information that could be important to you.  Of course most of the things I put in here probably do not help you much, but I know that some of it does. At least I get messages and e-mails from y’all and that’s what you tell me.  I hope that some of the information in these posts do somehow help out someone.  Of course you can always ask any question about the Philippines through the comments.

Since my last post was for 10 Feb, let’s begin this one on 11 Feb, which was actually a pretty good day.  Randy and Teri Landis had a party at their house.  It was a pretty nice party too, for us ‘older’ folks.  Probably any young adults and especially children would have been pretty bored, but it was good for me.  I got in a lot of conversation, which I don’t do much of while at home, I got to play Washers (though only once (and lost 16-12 to Randy)) and there was plenty of excellent food.  Of the foods that this picky eater (me) eats, I liked the taco salad and coleslaw the best. Lita made the taco salad and Terri made the cole slaw (with ‘a little’ help from Randy).  Of course we had beer, but I limited myself to 4 or 5, I didn’t really count, of the bottles of San Miguel. The small bottles, not the liter bottles.  The mashed potatoes, meatballs and mixed vegetables were also very good.  Anytime I get a chance to eat mashed potatoes, I do and I have not recently, until then, had a chance to eat a lot of ‘mixed’ vegetables.  I don’t know why, except that you would have to mix them yourself because they don’t have them pre-packaged here (at least not that I know of).  Maybe that will change when/if the HyperMart is finished because they should have quite a few things that the other stores here do not normally stock.

Our trip to and from the party was in our newly painted tricycle, driven by Saddam.  Saddam waited there for us, but he was too embarrassed to come inside.  He stayed with the tricycle the whole 3-4 hours we were at the party.  Of course we did bring him some food and a soft drink.  He even actually washed the plate before he returned it to us.  I guess riding in the tricycle is okay for the short distances, but when you are a big guy and the roads are not exactly maintained the best that they could be (I’m being generous here), it can be a not so wonderful ride.  So when/if you are moving here you might want to invest in a better vehicle.  I think that I’d rather have a multi-cab because that way we would have a better vehicle to travel in AND Saddam could still use it, when we wasn’t, to make money for his family.  We can’t afford a multi-cab at this time, but I’m going to insist on getting one within the next couple of years.  I just turned 57 years old and I figure by the time I’m 60 we’ll have one.  By then it will really be welcomed, although I do plan to be a smaller guy, I will never be a ‘small’ guy and after adding in the “older” guy, the up higher vehicle will feel much better.

Moving on to 12 Feb, I got to talk with my mom and dad via Skype.  My sister hooked up Skype for them and they can view it on their 60″ TV, so they use that all the time to contact me instead of the Yahoo Messenger they used before.  Oh we still send message via Messenger, but as for audio, it’s always Skype these days.  They have it set up for them and it’s simple, so that’s the way they go.  We talked for about 1.5 hours, so that was pretty good.  I worry about them sometimes and think that maybe I should be there for them in their older age.  Dad will be 80 next month and Mom, well Mom is always 21+ according to her, but it’s more than 21×3 + (that’s all I’m going to say on her age, in case she is reading this).  I’m the eldest children, though only by 11 months, and I’m the one that should take care of things when/if something happens.  My sister, next oldest, is more than capable of handling it though.  Who knows what the future has planned for us, I sure don’t (and like it that way).

Not too much happened on the 13th of Feb, not noteworthy anyway.  We did have a brownout for almost an hour, but unfortunately that wasn’t a big deal because we are use to those.  I don’t want to be ‘use’ to them.  I want them to stop.

On the 14th (Valentines Day) we had reservations at Marcial’s Grille.  So far it’s still the best place we have eaten in Calbayog, heck I guess the best place on all of Samar so far, not counting homecooking.  Our reservations were for 6pm and we arrived about 5 minutes till.  Last year when we got there, there were so many people, we had to sit upstairs (we didn’t have a reservation), but this year there was hardly anyone there.  Actually when we arrived, we were the only customers.  After we got our food though (buffet), others started showing up, including Andrew and Jesyl.  They just happen to have the table right next to us reserved.  I’m getting fat, so I limited myself  to 2 plates, but only 4 pieces of the ribs (I usually eat twice that).  I love the spring rolls there so I got those.  Lettuce for the salad there (and it seems many places in the PI) is always cut to large.  I tried the egg drop soup and it was okay, not the best, but definitely not the worse I’ve ever had.

We were brought to Marcial’s Grille by Victor in Juvic/Neil’s tricycle because Saddam got stuck someplace in ours.  Still not sure what happened with that.  Lita told Victor to come by around 8pm to get us because she was expecting it to be so crowded like last year.  We were finished before 7pm.  So instead of waiting, we got a local driver to bring us back.  He only charged us P50, so that was good for us.  After being back for a while, Saddam showed up here and said that he waited at the restaurant for about a 1/2 hour before figuring out that we were not coming out because we were not there.  That miscommunication is not uncommon around here.

The last thing in my notes is on 16 Feb.  We had our first batch of the pinto beans that we received in the balikbayan box that we sent to ourselves.  We bought out the Dollar Store in Belton of the 9 bags they had.  At $1 per bag, it was a heck of a deal.  I guess tonight will determine how soon we get to have some more pinto beans.  If the beans turn into an orchestra tonight, then it might be a little while before we have them again.  That reminds me though.  I was told that if you soak the beans in a little baking soda, then you don’t have to worry about them turning into a musical instrument.  Anyone know about that?

Well that’s it for now.  I hope to get more information on more things soon.  Still waiting on the gym at the Ciriaco, but I’m going to have to find a way to lose a little bit before that because it seems they are never going to build it.