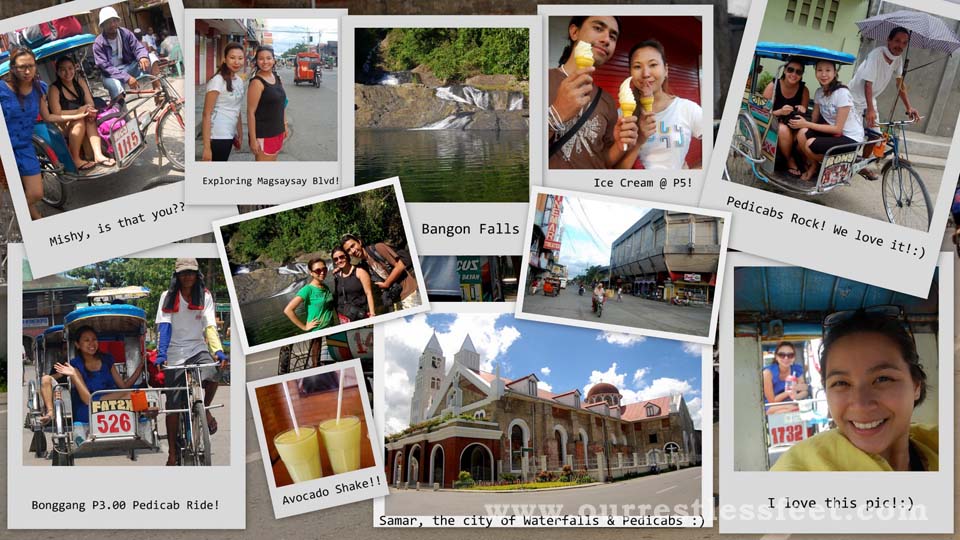 ANNOUNCEMENT:  Larry and Dorie Jackson will be having a party at their house on Malajog Beach.  The date is 27 Dec.  The time, if I remember correctly, is at noon.  This announcement will also be in the Calbayog Expat Facebook Group and if I am incorrect on the time, the correct time will be posted there.  ALL expats are invited, but most likely only expats in this area will show up.

It’s been awhile since I’ve done a post on local events.  I’m still entering the information from our last trip.  Well during this last extended power outage, which I’ll get to in just a little bit, I have decided to make a few changes to the blog to make it easier, I hope, for y’all to view things.  At least it should help you get to only the areas that you are interested in viewing.  Even this entry that I am typing right now is something new.  I am typing this in Word under the Blog Post option.  Supposedly I will be able to register my blog through Word.  I hope that works because then I would be able to type up blog posts even when the internet is now, which it is right now.  I figure that, at the very least, I can always copy/paste this text to the blog if the registration and/or the transfer to the blog doesn’t work like I envision it will.

Rather than try to remember all the things that have happened since we’ve been back from Texas, I’m going to go with the few notes that I have to get y’all up to date, somewhat.  There are also a couple of other things that happened that I didn’t write down that I will get in here.  Those things really got me to thinking about life and about things, so I remember then pretty well.  This Word, in addition to the spell checker has a grammar checker too, so maybe my writing will not be the normal bad grammar stuff.  Of course if I read over it and I don’t really see anything wrong with whatever it has underlined, then I’m not going to bother to change it.  I don’t have that many notes, but I wrote down only bullet notes and I know I will be able to expand on each and every one of them.  So what I’m trying to say, in a long about way, is that my one page of bullet notes just might be enough for a couple of blog entries.

Most everything I will be talking about is after 12 Nov 14, although there is one thing to mention that happened before that time.  I’m not even sure if I mentioned it in a previous post, but I don’t think so.  I don’t have the exact date that this happened, but for y’all that have been reading this post for a long time, you might remember a lady that use to work for us named Vickie.  Well here not too long ago I found out that her youngest son, was hit by one of those fast moving vans they have around here.  At the time I thought that he was killed, but luckily it turns out he wasn’t.  He was injured and was in the hospital, but he is now out.  I seen him just recently and he looks just fine.  I saw no physical problems showing and he seemed to be walking just fine also.  I was glad to see it.  He’s a very nice young fellow and he almost always had a smile to share when he came by here to visit his mother.  I’m going to have a story in the next post that will reference back to this post.  Seems that their family is having an unusual string of bad luck.

So on Nov 12thI went shopping with Mark Gianetta.  Actually he did all the shopping, I just went along to talk and to keep him company.  He had the usual “Honey Do” list and we were trying to get all the entries scratched off that.   Later in the day I went shopping with Lita.  We went to JustMar and that is the day that I found the 80 ounce bottle of Kraft BBQ sauce for P250.  Now I know that I put that in the Calbayog Expat group because Andrew told me that he went down there that very afternoon, but it was already too late.  They were all gone.  I had hoped to be able to get another bottle at the end of the month, but they, even to this day, have not gotten any more of them in.  You would think that something that sold so fast would make them want to get more of it.  They do have some 18 ounce bottle of Hunts BBQ sauce, but they want P128.50 for those.  That’s too much and Hunts, in my opinion, is not as good as the Kraft anyway.

I’m getting close to the end of this post entry so I’ll skip to some important things that need to be said here.  Everything else I will cover in the next post.  I think that it is good stuff, but it is something that really doesn’t matter when it is told, as long as it is soon. On 6 Dec we had Typhoon Ruby on track to pass by or hit Samar.  I was told that everyone in this area had to evacuate, so we went downtown, a little bit more away from the water front.  At 10:00 pm that night Samelco turned off the power for “precautionary reasons”.  I guess they did a good thing there because, from what I was told, quite a few electrical poles were knocked down.  Personally, while in Texas and Mississippi, I experienced thunderstorms that were more violent than this close call with the typhoon.  I’ve also been through a few typhoons while stationed in Okinawa that were more direct hits and had more powerful winds.  I’m not sure what they put those poles up with around here, but maybe they should start trying something different. Though rumors had the power coming back on anywhere from a few days to next year, it ended up being turned off just about 30 minutes shy of exactly 10 days.  At around 9:30 pm on 16 Dec, they finally got the power back on.  To me it seemed to be an excessive amount of time, but I’m going to be checking the news to see what kind of problems, if any, they had in restoring the power before I pass any final judgment.  I even plan to write a post on what I find out in that research and add a few “What if’s” in there too.

So all of that brings us full circle, right back to me typing up this blog entry in Word, instead of directly into the blog, like I normally do.  Actually if this Word ends up working correctly, then the internet being down now will not be a complete waste of time.  I’ll have a couple of more items about things that I did after the power came back on in the next post.  I’m also going to expose that idea that I came up with to hopefully help improve the blog.  That and other interesting things that have happened or should be happening soon I hope will make for some interesting reading in the next post.  I hope you will be there to check it out.  Sorry no pictures this week.  I’ve been too depressed because of the power outage to take any new ones.  If all goes as planned, I’ll be having plenty of new pictures and even videos, very shortly. Salamat Y’all

3 thoughts on “No Power Word Power”