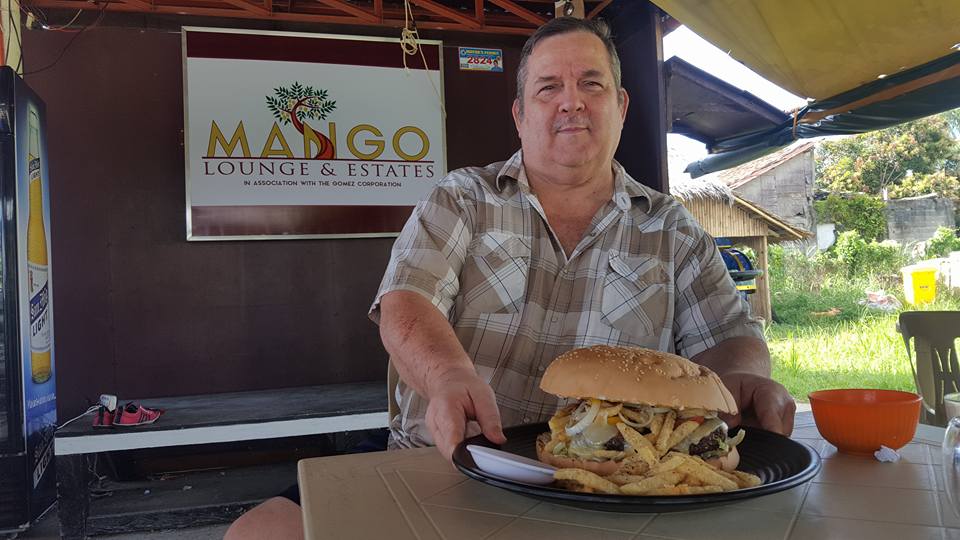 Me posing with their P600 burger

Addressing my problem a little bit more, there are some obstacles.  The not eating so much has pretty much been taken care of, with still one little thing to stop.  For breakfast I usually have oatmeal.  It’s the instant stuff with flavoring (example apples & cinnamon) or I would otherwise probably need to add sugar and milk to it.  I do without those now.  For lunch I make a salad.   It consists of lettuce, tomatoes, corn (from a can, water drained), apple and dill pickles.  The dressing I make myself and it consists of lemon juice, olive oil, pepper and a little salt (not much).  It’s really good if you make it right.  If I feel like eating anything in-between, it is an apple or an orange.  For supper just about every night, I have stew.  I do add a can of stewed tomatoes to the mix.  I usually have 2 bowls of that, but I’m thinking I should reduce that to one.  I do my weigh-ins on Wednesdays, so if I have been gaining weight, I’ll reduce that and see for the following week.

Mostly, like 90% of the time, I just drink water.  I still drink beer, but I’ve limited that also.  Most days I do not drink any beer, but when I do, I limit it to 4 bottles.  Before I was drinking up to 8 bottles when I drank.  I have been limiting the drinking days to no more than 3 days per week.  Regardless, overall, no more than a dozen beers per week.  I was doing that in 2 or 3 days before.  Actually, recently, all I’ve had to drink is water, beer and 1 glass of V8 juice.  I did make some Crystal Light and will probably have some of that later tonight.

One of my problems with exercising is that during the daytime here our water pressure is almost nothing.  If I did go to workout, I would not be able to take a decent shower until early in the morning.  I guess I could to the tabu thing (using the pail and a bucket of water), but a hot shower after exercising always feels so much better for me.

Then I have the problem of the marks on my arms when I go out in the sun.  The doctors say it’s an age thing, but I can block it with a good sunblock.  With the sunblock though, it makes me sweat even more than I do already, and I do sweat a lot naturally.  Maybe because I do drink so much water.  I tried to get some of those long-sleeve shirts like the professional bike riders use, but the only pair I could find would not fit over my fat arms.

Despite all this, things are going well for me now.  Sometimes I wonder why I am still here in the Philippines and not back in the place I love more than anyplace (Texas), but then sometimes it’s nice to be here.  I wish I had the money so I could split up the year and be in both places, but most likely that will not be happening.

I’m still going to get that information on Mango Lounge.  I didn’t forget.  I want you to see the progress they have made and tell you about some of the things that are planned.