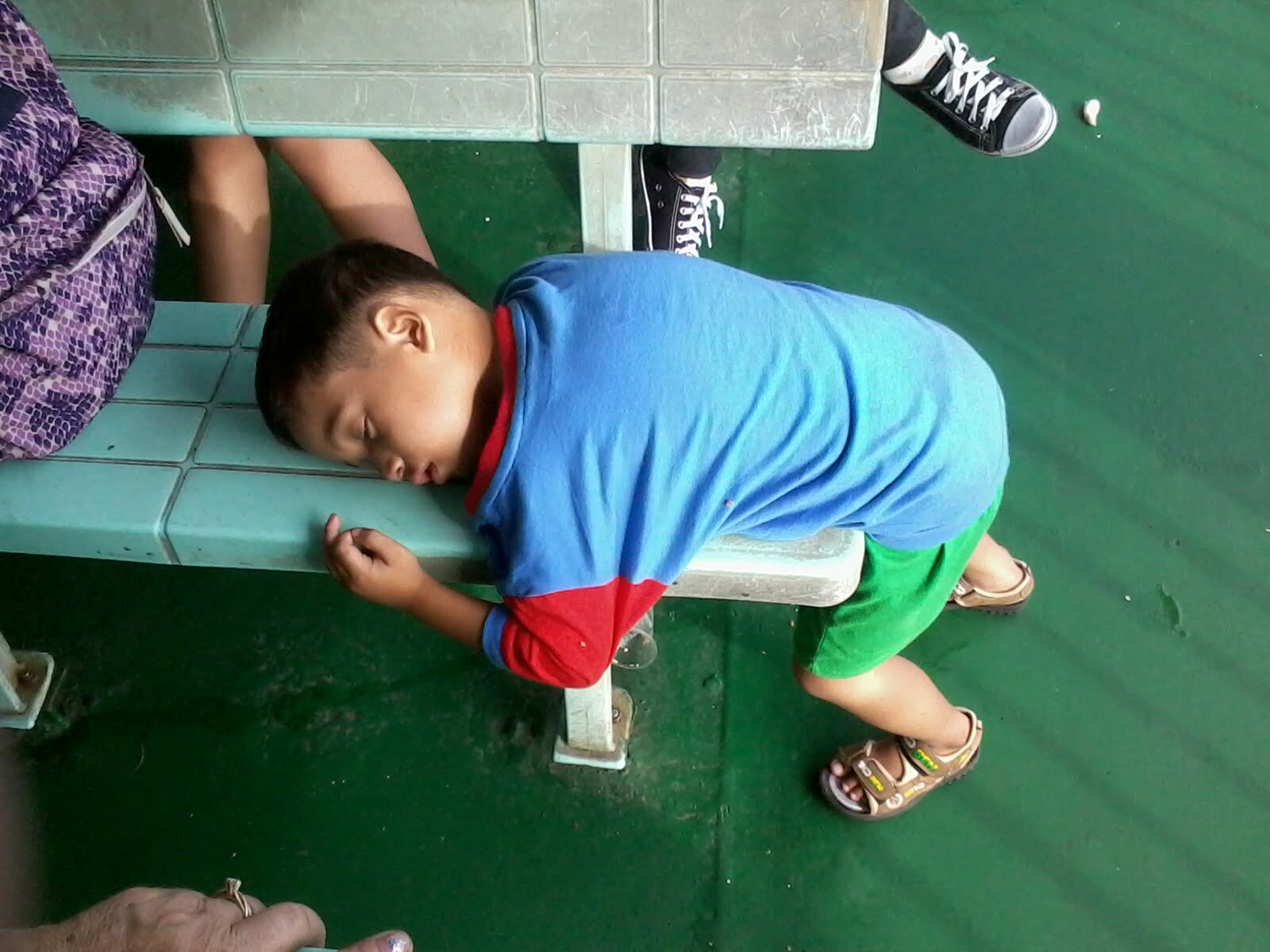 One tired little boy (with comments)

If you recall, at the end of the last zine post, Zine Entry #41 – Fields Ave, I had just finished up my first night time trip to the famous Fields Ave in Angeles.  That was last Friday night and it is now Sunday, 11 Aug.  We are still waiting to get a flight out of the Philippines to get our balikbayan stamp.  I had already learned to call the night before a flight to make sure that the flights are still going and still taking on passengers, but today I learned to expand on that lesson.  I called and was told that due to the incoming typhoon, that the flight scheduled for tomorrow, had left this morning.  It did have 7 available seats and only 2 passengers were there for the seats.  The new lesson is therefore to call EVERY night when trying to get a Space A flight out.  You just never know what is going to happen.  Another missed opportunity, but a valuable lesson learned.

I was however informed that in 2 more days there would be 2 flights with a potential of a total of 13 seats.  Well since we just narrowly missed a recent flight and I found out that we are the #1 people in Category 6, we decided to stay the extra 2 days to give those flights a chance.  This would have to be our last try though.  Anything more time after this would take up too much of our money and even if we did get a flight out, we might be stuck on the other end and never get back.

So, following the new lesson I just learned, I called on Monday night.  No change in the flights.  I called on Tuesday night and there was still no change, except the planes were normally suppose to be there by now, and were not.   I called again later that night, as per Mr. Corrigan, and the planes still had not shown up.  That means that now there would be no flights for Wednesday.  We just stayed there an extra 2 days for nothing.  Of course this whole Space A thing out of Clark has been a good/bad experience for us.  The next flight is not until Saturday and we just afford to wait that long.

So the money that we were going to use at the other end, we decided to get it and spend part of it here to bring things back to Calbayog with us.  We also needed to go get another 1 month extension because our legal status here runs out on 27 Aug 2013.  In addition to that we also decided to stay one more night in Angeles to get things down and not rush things.  We could have done it all in a day, but why?  We would just worry about things next month, although we would have to do it with less money.   Unless of course we get our Nissan sold, then we’d have the money to do many of the things that are eluding us these days.

I did have a much better time on this trip than last month, mostly thanks to Gary B.  Some good news is that I will be able to make all my fantasy football drafts now.  Of course getting this visa thing done is far more important.  Maybe this is one of those things that happened for a reason.  I guess we will see.

I’m going to condense a lot of the things that happen here instead of spreading it out.  I need to get caught up on my notes.

We went by the Immigration Office again, but could not get another extension without also getting an I-Card.  Not an option because we don’t have enough money for that right now.  I did find out that the travel agency in the Horizonhill Hotel has an immigration section.  We could have gotten the extension done there, but it’s still the same for the I-Card.  I decided it would be best to come back home and talk with Randy Mendoza here.  He is in a small immigration office for expats here.  I just recently found out about him myself.  Were just putting things off, hoping for the best later.

So in Angeles we get on a bus that we have not used before, and never will again.  We ended up at the back of the bus and people had luggage in the aisle all the way back.  Also the last row of seats were on a little elevated platform.  That wasn’t so bad, except for once when we hit a big bump.  I was so close to the ceiling that I smashed my head on the top of the bus and it bent my neck.  I think I’m lucky I didn’t break my neck.  The rest of the ride was spent preparing myself for every bump and getting my hand up to block myself from slamming on the top again.  In addition to the bumps, Lita could not find one of our bags.  It had her bagoong in there and the salsa that I bought.  She stressed and moaned about that dang bag just about the whole trip.  It turns out that it was on the bus, but it was under the bus with another piece of our luggage.  I couldn’t wait to get off that bus.

After we finally got home, I had to go relax.  I was so worn out and my neck was hurting.  I waited 3 days before finally heading out to the local immigration office.  Juvic was suppose to go with me, but she changed her mind at the last minute.  I didn’t know how to get to the sport center complex (where the Immigration Office is).  The tricycle driver knew, but he had no idea about the Immigration Office.  So I wandered around asking people (half of which acted like they didn’t understand me) for about 15 minutes.  Some people kept staring at me walking back and forth.  Finally I figured it out.

When you arrive at the sports complex, the main entrance is to the right.  Don’t go that way.  Go on the outside and to the left.  You will see another opening there which is not easy to see from the gate and there are no signs hanging up.  Just as soon as you find that opening, the Immigration Office is to your right, right inside the door.  Be sure to bring your passport and ID with you.  I didn’t have my passport and he couldn’t help me much with what I wanted.

Next Zine I will let you know what we ended up doing to resolve our little problem.  It was not my first choice, but as it turns out, was probably our best choice at the time.  I sure hope that we both learned things from these past adventures that we will never forget.