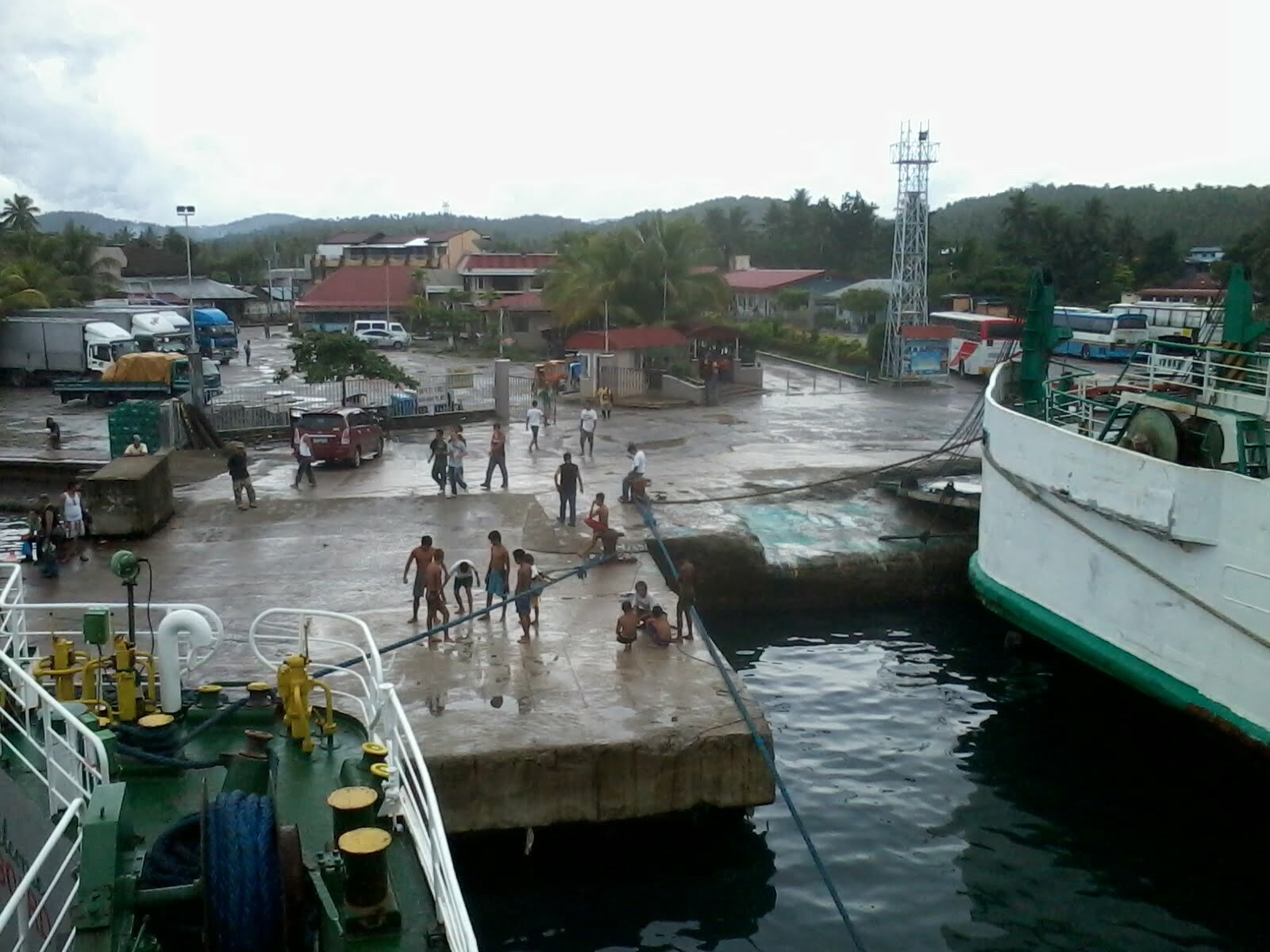 Ferry dock from ferry (with comments)

Alright y’all it’s time to get started on the adventures we had on our second trip to Angeles City (AC) to try to get a Space A flight out of the country.  We did learn some new things, good and not so good, plus had a bit of a different adventure than last time, especially I had more of an adventure.  I started out trying to get all the travel times, but starting forgetting, I was just hoping to get to our destination and get the trip over with.  In other words, I was tired of traveling.  Let’s start in a good place, the day we left.

On August 5th Saddam showed up around 1015 ready to take us to the bus terminal.   That was too early.  We decided to wait until 1045 before we left.  No sense in standing around the bus terminal for an extra half hour when I, I mean we, can be laying on my bed in front of the fan instead.  Last month we waited at that terminal for over an hour, not this time.  The bus is not scheduled to arrive until 1130, but that schedule is not set in stone, especially with Filipino time in effect.  This time however the bus actually arrived 10 minutes ahead of schedule, at 1120.  We departed Calbayog on DLTB Bus #1106 in seats 31 & 32 at 11:45.  The cost of our trip to Cubao was P1000.  We arrived in Allen, at the ferry, around 1:30pm, so about a 1 hour, 45 minute ride.

We got off the bus, went inside and paid our P20 terminal fee.  Some people stayed on the bus until it got inside the ferry.  When it was time for us to go upstairs on the ferry, we were not allowed to, until ALL passengers had paid their terminal fee.  So all the ones that stayed on the bus had to walk back to the terminal, pay their fee and return before anyone from our bus was allowed to go up.  At least that’s the translation that I got from all the goings on at the time.  By the time we were allowed to get on the ferry it was around 2:30pm.  We showed our bus ticket and terminal fee slip and a guy gave us a boarding pass.  You walk to the next guy, about 2 steps away, and give him the boarding pass we just received.  Seems pretty silly doesn’t it.  When we finally got to depart it was around 4:15pm.  The ferry piddle paddled around back and forth a couple of times before finally leaving.  I don’t know what was up with that.

Once on board, according to Lita, you need to sign in for insurance purposes.  I did not sign in, but when Lita went to get a couple of Mountain Dews, she signed us both in.  The Mountain Dews in the short, long neck type plastic bottles are P50.  Lita also bought herself a small cup of noodles.  We had fried chicken that she cooked the night before we left, so I had one of those and the Mountain Dew.  While I was eating, and had something in both hands, some young boys decided to jump off the stationary ferry next to us.  I missed the jumping part, but I did get a picture of them in the water afterwards.  The water around the ferry is very dirty.  I see people spitting and throwing trash in it all the time.  Even the children, following the adults lead, do it.

While we were on the bus, going to the ferry, Lita gave this old couple, in the seats behind us, a piece of our chicken.  Now, on the ferry, she decided to give them a couple of the several tamales that she brought.  It’s fine with me because they are Filipino tamales and I only eat the Mexican tamales.  While waiting to depart on the ferry, I walked around the deck and even went up to the observation area on the third level.  It might only be my imagination, but it seems that where ever I walked, the ferry tilted in that direction.  It must be my imagination or I am much heavier than I think and very seriously need to lose weight.  I was glad when we finally did get rolling good because I was sweating a lot just sitting at the dock.  You get a nice breeze once it is rolling good.  They do have an air conditioned area, but you need to pay extra for that.  It’s not really necessary, once you are moving.  I took a few pictures while I was walking around and I even tried out the panoramic view feature on the camera, but I can’t see any difference in the pictures except it came out smaller than the normal picture.  I don’t like that.

We docked in Matnog Bicol around 5:30pm and they started letting passengers off around 5:40pm.  I figured that we did not have to hurry because our bus was at the back of the ferry, as it was one of the first ones on.  I was wrong.  In those 10 minutes before letting the passengers off, they unload the vehicles from the ferry.  When we got to the bus, we were the last ones there and they were waiting on us.  They got moving before Lita even had a chance to sit down.  I was already sitting, since I had the window seat.  So off we go towards Cubao.  The road leaving the ferry area must have been built while following a snake.  There are a lot of twists and turns.

Around 7:00pm we stopped for a meal/CR break.  My stomach was not feeling well so I stayed on the bus.  Lita had some medicine for ailments and handed me a couple of them before she got off the bus to go pee.  She was in a hurry, but when I looked at the medicine, it was all in Tagalog.  I didn’t know whether to take the one that said Tigan or the one that said Lawas.  I’d have to wait until she returned because she only had 3 of each and I didn’t want to waste them, just in case.  About 10 minutes later she returned and it turned out to be the Tigan for stomach aches and the Lawas is for body aches.  My stomach does not hurt many times, but I hate it when it does.  I’ll have you know that about an hour after taking 1 of those Tigans, my stomach ache was gone.  I even felt like eating some of the chicken we brought along with a couple slices of bread, that we also brought.

We did not stop again for any long period of time, just a pee break on the side of the road, which normally only guys get off to do, until around 0250.  We did not actually even get off the bus until 0300 because it was pouring down rain and the driver did not open the door until another bus left and we were able to get much closer to the terminal and restaurant.  We were there for approximately 30 minutes, so around 0330 we were off again.  After another pee break, we arrived in Cubao around 0630.  I will pick up on our adventure from that point in the next Zine.  For a little taste of what happen, we did not get off the bus in Cubao even though that is where we were paid to.

Retire Young in the Philippines but What About my Children