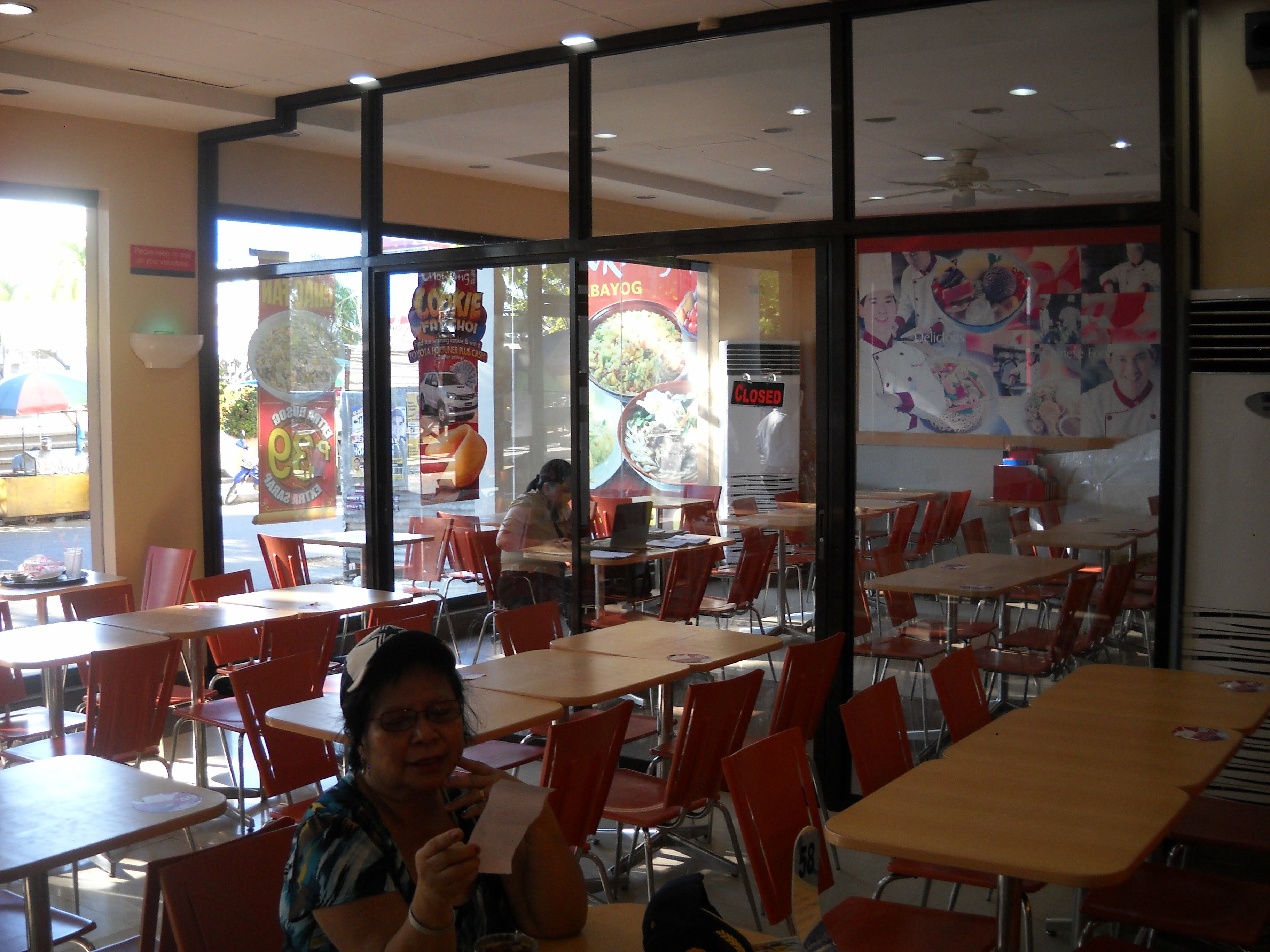 Although I never got all the details, it seems that someone on a motorcycle in front of the other Our Daily Bread Bakeshop across town, was shot and killed.   The person running the other bakeshop called over to let them know here, but it was not an employee that was the killer or killed.

This entry is a bit late because it happened right before I sent out the post Attention All Filipino Cashiers.

When I went downtown that day with Lita to get my check, we did the normal stopping by Chow King to eat, but they still do not have the chicken mami and it seems they will not have it anymore.  When they get a KFC and Shakey’s here, I’ll be eating at Chow King a lot less anyway.  All I get there is the chicken anyway and I like KFC chicken so much better, so it will be a regular stopping place and it’s even going to be closer to me with that shortcut we have here.

We also stopped by Mercury Drug, but they did not have one of my medications so we go those at Rose Pharmacy across the street.  I should have just gone to the Mercury Drug on Magsaysay because they have always had what I wanted there.  I forgot to ask for my cash receipt to get reimbursed by Tricare, but I still have a chance on part of it because even Rose Pharmacy didn’t have as many of the pills as I wanted.  I wanted 30 (1 month) and they only had 14.  When I get the other 16, I’ll get that receipt.  I need to make a mental note to not get my medication when downtown with Lita.  She always seems to be in a hurry and/or tired and wants to get back home.  When I get hurried, I forget things like that receipt.

I made some chocolate pancakes on 2 May.  I wanted to see if they would be better than the strawberry/banana pancakes I made the week before.  Although they were good, they were not better.  Maybe next time I’ll go with chocolate/banana.  On the cooking subject, I keep trying to tell Lita that when/if she wants to cook fried chicken, she doesn’t have to ask me if I feel like eating it today.  The answer is always going to be “Yes”.   However, she continues to ask me.  Maybe I should tell her “No” someday.

Recently I have been watching some movies online.  I get tired of the English speaking stations here always repeating the movies.  They have certain movies that come out each Sunday, but they tend to continue playing those movies for the next 2 or 3 months, over and over.  Even the other stations, they like to play the same show over and over.   At least twice they played the same “Criminal Minds” show 3 times in a row.  Not back to back, but when it came on, it was the same show.  Fox is into playing a lot of animation stuff and they have some pretty stupid shows too.  The Walking Dead, Community and some don’t stop singing karaoke show … all dumb.  And the repeating commercials are nerve racking.  I do see that they will be having some good ones starting soon though.  Anyway, that’s why I’ve been turning to the computer for movies.

I have been looking for a couple of movies online that I cannot find.  Maybe someone out there can assist me with it.  The movies are “They Call Me Trinity” and “Trinity is Still My Name”.  I know most of y’all have heard of these and probably even seen them.  I found and watched “My Name is Nobody”, but I can’t find the others in English.  If I could speak French or Italian, then I would not have a problem.  The whole movies are there in those languages.  Of course I’d like them “free”.

We had someone come by on Friday to fix up our CR a bit.  We had our rain shower shower head installed.  It’s been laying around here for almost 3 years now, so it’s about time we had it put in.  He put in a new fixture so we could have an extra sprayer along with the shower and also a spigot, faucet, tap whatever it is you call it.  I like the new setup and he said that when we get the hot water heater, he knows how to install that also.  We still need some work on the CR, so I hope that will be soon.

I have been having trouble connecting with Bank of America online.  This is the first time I have had this problem since being here.  Sometimes it takes like 10 tries to get through.  I found their Facebook and sent them a message about it and they responded with an 800 number to call.  I’m going to try the site again later and see if I still have the problem.  I haven’t checked it in a couple of days now.  In fact, I’m going to check it now, hang on …….. okay it worked.   We don’t have much money left in there, but it worked the first time.

Well we had some visitors again, next weekend will be a busy one for us and we finally got something started that we should have done a long time ago.  All that and more in the next Zine Entry.  I hope you will be back to see what it’s all about.