[smartads] Y’all probably noticed by now that I did put a different post in the blog.  I just put it in so you could see somewhat what it would look like to be there.  I did change the blog looks a little bit to make it fit better.  So what’s the verdict on that, do think it’s something y’all can live with?  For me it helps give others a chance to to see other aspects of the Philippines.  It also will give me more words to help get more results from searches in search engines.  I don’t want to lose any of the readers I have already, y’all are pretty cool, so let me know if you have a ‘major major’ objection to this.  I couldn’t resist the ‘major major’ thing.  If you have been following the Philippine News the last few months, you’d know what that is in reference to.  Besides that is said a lot around here anyway.  Remember when Filipinos what to stress a point they just repeat the word, like maganda means beautiful, so maganda maganda means ‘very beautiful’.  Seriously though, if there is too much of an objection to me adding different new items or other articles, then please let me know.  As I said, I will still do the regular post, so I’m not seeing a problem, but I could be missing something. 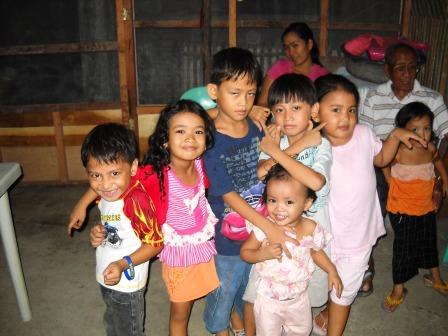 On the morning of 7 Dec I was up at 0755.  I knew today would be an important day, and it was, but it wasn’t very active.  I did make a few changes to the blog besides the ones to get more articles on the page.  I joined a couple of communities, Philippines What’s New and Visit the Philippines, that I have listed under Blogroll.  The most important thing that was happening today was that Lita and Cathy would be going by the electric company to discuss our bill.  Oh, we have no doubt that we owe as much as they say, I mean come on it was for 4 months worth of electric, so P22,065 is not that terrible.  That’s about, in dollars, $128.35 per month.  The bill from now on will be even less because we are getting more accustomed to the weather, thus the less we will be using our most used electrical device, the air conditioner.  Also about 95% of the time I turn the computer off at night.  I wasn’t doing that in Texas.  I’d just leave it on so I wouldn’t have to boot back up in the morning.  Here with the uncertainty of the power, it’s safer to turn it off and that means less electric.  I even started turning the fan in the computer room off when I go to bed.  I was keeping it on because I was afraid it would get too hot in here for the computer.  Mar said that he doesn’t even have a fan on his at all and he doesn’t have problems with his.  I’m going with that for awhile, unless I start to see problems.  The computer is turned off, so it should be okay, right?  Of course that 5% of the time I leave the computer on, I leave the fan on also.

Before Lita left for the electric company, she didn’t leave until 1:00pm, I made banana pancakes for breakfast around about 10:00.  I used the Maya pancake mix in the small box that makes a lot of pancakes.  I like that Maya mix and I think it’s less expensive than the other one, plus it makes more, so we’ll be buying that one from now on, when we get mix here.  Of course while in Tacloban or some other major city, I will take advantage of my location and get a brand that I learned to love in Texas, like Pillsbury or Aunt Jemima (my #1).  I was able to make 5 large pancakes from the mix today.  I ate 3 of them and Lita told me to leave the other 2 for her.  Turns out that she ate 1 and gave the other 1 to Precious.

Lita left on time for the electric company.  She didn’t want me to go because first of all, it’s easier for them with the language barrier and all, but mostly because I’m use to yelling to get things like that done.  Oh, I don’t start out yelling, but if things don’t go the way I think they should, then my voice starts rising.  Turns out, in this case, it’s a good thing I did not go.  They said that we must pay the entire bill before the 28th of December, or they will turn off the electric.  They said that were doing that because we should have tried to contact them earlier to make arrangements.  Well we did try to ask about that bill.  Ramil and I went, remember I took pictures of the CR that said Lalaki and Babae, plus the Pajero SUV?  Anyway, if I would have been there, the electric probably would have been turned off by the time we got home.  We will be able to pay the electric, but it’s a good thing that a couple of relatives that owe us money are able to pay at this time, or we’d be in trouble.  Mostly because we still need to pay for the Nissan.  Things like this is why I don’t think we’ll be able to go to Texas this May.  Going in January 2012 seems to be a more reasonable time frame.  What little bills, other than utilities and the Nissan, will be paid off by then, plus we’ll have that extra P10,000 per month from the Pepsi trucks starting in June 2011.  Oh, yeah and also LolyKat will be finished and operating at full speed.  So let’s see…less bills, plus Pepsi truck income, plus LolyKat income, plus blog income (hopefully by then) equals less money problems.  Hopefully less equals zero.  Maybe even an increase in my military retirement check too.

Tagalog Word of the Day:  tindahan  (tin-dah-han)  means store (as in grocery store)

The 8th of December also started out interesting.  I woke up at 0640 to the sound of fighting felines and Lita’s voice yelling, “Honey”!  Obviously I knew what was going on so I was yelling, “Use some water”, but she was waiting for me to get the water and take care of it.  By the time I got outside those 2 cats had run out the gate with Blue (who Lita has started calling Juvic now) chasing Kitty Grace down the road.    I just put the water on the sink and came in here to the computer.  About 20-30 minutes later Kitty Grace came back meowing and Lita put him in the bedroom.  He hasn’t gone outside again all day.  Lita started calling Blue, Juvic because of the 2 sisters, Juvic and Grace.  She figures if one is called Grace the other one should be Juvic.  There are 2 cats at Juvic and Grace’s house that they call John & Lita, so it’s only fair.  I might have told y’all that already, but it doesn’t hurt to make sure, and it’s easier to repeat it than it is to look it up.

Lita went to the market today with Eddie in our tricycle.  She had to buy a few things for the BBQ, plus I asked her to get some fruit for me.  See, I’m listening Winda.  She brought me some oranges, tangerines, Fuji apples and Asian pears.  I’ve already eaten an orange and shared a tangerine with Lita.  Tomorrow I’ll probably get one of the apples and one of the pears too.  It’s a good think they have many different types of fruits here, because Lita likes to get 13 different types of fruit for the New Year.  I don’t know what that has to do with anything, but she does it every year.

Stupid cheap batteries.  I just put new batteries in this camera yesterday and they are already out.  I just gave them away to Robbie.  She uses the low power things in her wall clock.  I give up, I’m going to buy the rechargeable batteries.  It’s got to be less expensive in the long run.  I’ll buy the charger and 4 batteries here pretty quick, depending on how much it will cost.  If I can’t get the money from Lita, I’ve got P1000 that she doesn’t know about, Marianne no telling.  I try to keep some on the side for situations like this, for things that are important.  If it doesn’t cost more than that for it, I’ll get everything by the end of the week.  I’ve still got some of the cheap batteries to use first.  Well, maybe I’ll just save those for our wall clocks like Robbie does.  I’ve got 6 of them left, plus one old Duracell battery that I don’t even know where it came from.

I did get some new pictures today that I will be posting.  Plus I still have a few from my last trip downtown that I have not posted yet.  I may be going downtown again pretty soon too.

Arnel is here working on LolyKat again.  He is making some shelves.  He doesn’t arrive here until around 6:00pm and only works until 9:00pm.  It’s because he has a regular job now, so he can’t be here all day like before.  On Sunday, he will be here working all day though.

According to my WP-useronline stats, the most visitors that have been on this blog at one time is 17.  That happen back on 25 Nov.  That would be pretty cool to have 17 on-line every hour, 24 hours a day.  But you know that would only be 12,240 visits in a month.  To keep up with the top blogs,  we’d have to have almost 170 every hour, 24 hours a day.  It’s a dream I hope to come true someday.

I had to hurry to get this out because I had problems with the Internet for the last hour and I wanted to get the pictures put in and get this out fast.

Have a good day and don’t forget to leave comments and ask questions if you have them.

Useless Knowledge:  When astronauts first shaved in space, their weightless whiskers floated up to the ceiling. A special razor had to be developed that drew the whiskers in like a vacuum cleaner.