[smartads] This picture was taken inside a house here in Calbayog City, but I don’t know which one.  Left to right Grace, Jun, Juvic, Judith (seated) and Faye (in lap). I was lazy AGAIN today and didn’t get out, but I’ll make an effort tomorrow to get some pictures so I’ll have some for the next post. As for today, I’ll toss in a variety of pictures. I might even hit one that I haven’t posted yet, but that’s going to be hard to do because I think I posted them all. At least all the ones that are in focus.
I wonder if I’m still having that problem with saving posts. Guess I’ll find out right now so I won’t forget and it’ll stay fresh on my mind while I’m typing. ***Okay, so far it’s fine*** I’ll be sure to keep checking it EVERY TIME I save, just to be sure. I probably said this already, but it’s really aggravating. 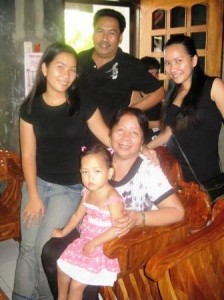 7 Mar – Hit’s @ 0210 = 191958. This blew my mind (again). If you go back and look at the previous post (6 Mar) you’ll see it was at 185344. So that’s 6,614 hits in exactly 24 hours. That’s averaging 275.5 hits per hour. When I first started this blog I was even getting the 275 in a whole day. So things are looking up now thanks to all you people out there that read and comment here. I’m still not making any money with the blog (well almost $6 in advertisements), but it seems to be getting more popular and it’s only ‘not quite yet’ 7 months old. Wow! I had to count that 3 times to make sure because it seems like I’ve been doing this longer than that. I started on August 19, 2010, so that’s right…this March 19th will be 7 months. I’m so happy about that that any of y’all that come visit me, and remind me, I’ll get you a free drink. Coffee, beer, rhum, soda, water…whatever. Even lemonade or iced tea with a couple days notice so I can make it. If you give me a few days notice I’ll even have some food ready for you too, not the BBQ either (unless that’s what you want).
Right before I took that hit count at 0210, well about 40 minutes before that at 0130 we had another one of those less than 1 minute brown outs. This time it didn’t blow out the Internet, except to reset my modem.

I fixed the Filipino McDonald commercial, that I didn’t even know was broken until I tried to watch it again and I couldn’t get it to work. It should work fine now, at least it did for me. Y’all please tell me if you come across a video that doesn’t work or if you get a “Page Not Found” and I’ll do my best to fix it. I can’t promise I will fix it, but I’ll sure do my best. Some things I’ll have to get help with, and I’m sure there are lots of things that can go wrong that I have no idea about, but I’d at least like to be given a chance to fix things. I know I hate it when I go to a website and the videos don’t work, or the links don’t work, or something else is amiss.
The electric fan in the computer room finally gave up. We’re going to have to get a new one pretty soon, probably in Tacloban on the way back from Tambis. Even if it is a cheap fan because the computer room just get too hot for the computer without a fan. I’ve actually been turning the computer off whenever I get up from it, and spending a lot less time in here than I have been.
I don’t really want to spend too much less time in here, especially when I figure out something that takes a lot of manipulating to get accomplished, like when I added the hotel information. I not only had to go to each hotel to ask the questions and take the pictures, but when I put it on the blog I had to add a page for each one and change the way the other pages were in there at the time. I’ll be visiting the restaurants a little at a time, probably, so that should be okay. I have another idea, but I don’t want to say anything until I’m sure I can do it, because I already say some things I’m going to do, and I end up not doing them (my top ten list comes to mind right off hand). Actually I have 2 ideas at this time and I hope they both turn out okay, but even if it’s just one, that’s something. Well let’s make that 3 ideas, but the last one is a big one and it’s going to take time before I can present that. I need to get this blog built up first and if I can maintain the amount of readers I’m getting now, or more, I should be able to complete that big idea. Not sure if I can make any money out of any of those ideas, but even if I can’t, I’m still determined to do them.

I took a late nap today, from about 5:30pm to 7:15pm. While I was sleeping, my flag counter hit 100 countries. So that’s 100 different countries that have viewed the blog. Oops! Make that 101 now. Working on the second hundred. There are only 255 or 256 different countries, so I’m well on the way. Their are some countries in there that I’ve never even heard of and I had to look them up to see where they were. The latest country to visit is Ukraine. That flag counter I have, which you can get for yourself at: http://s07.flagcounter.com/more/056w – is pretty cool. I just found out tonight that I can breakdown each country into States (or whatever they are called not in the US). California is the place I get the most hits from, followed by Texas (about 85 hits behind), then Florida (about 180 hits behind Texas).

(Please don’t anyone take offense to my map, it’s all in fun)

8 Mar – Hits @ 0210 = 198751. Yep, that’s right, the day after the hits set a new record, y’all broke that record. This is 6,793 hits in that 24 hour period. Well done people. I don’t think it’s going to be breaking any records tonight though. There is another 1 hour and 20 minutes before we get to 0210 and the hits at this time are at: 202387, so, so far that is only 3636, so it seems doubtful we will reach even 5000 before 1 hour and 20 minutes. Of course I don’t expect there to be a new record broken every day, where would the suspense in that be? Every other day is fine with me. 🙂
The morning of 8 Mar was pretty boring. I watched LolyKat store most of the morning. J had a tooth pulled at one of the free clinic dentists yesterday and he had to go back again today because it was bleeding. That made up my mind to go to a regular dentist here, if I have to go. Come to think of it, I did have to go to a dentist, when I had that toothache, and I need to go again, to get my teeth cleaned. I wonder if they will let me make (and keep) an appointment on base in Korea while we are there for our week?

I still haven’t seen any of these new bills.

Today was the day that the blog went over 200,000 hits. I really am happy that we have so many, and so fast too. I never would have believe just a few months ago that we’d have over 200,000 hits already. I actually thought about it back then and figured about 100,000 per year, since it is a personal blog and normally they don’t get that many hits, but like I said, I must have stumbled upon something that someone likes because those hits just keep on coming in.
I did join a couple more expat sites. I haven’t added their link to the blog yet though. I’ll do that tomorrow. I also wrote down a few questions to ask the local restaurants when I go to visit. I’m also working on a way to improve relations with other expat bloggers.
My left shoulder area has been hurting a lot lately. I think that next time that massage lady shows up, I’m going to let her try to work that out. I might as well let her do the whole massage. Just in case y’all have never had a massage, and I’m sure there are some out there, a good foot massage is about the best thing that I’ve ever felt that doesn’t make a mess. That was a good way to say that, right?
I made some stew today and I ate almost all of it. I did save some for tomorrow, but only about 1/2 bowl.

I did find out today that people are not sure of where that mall is going to be built now. I ask some people and they say they heard here, others say at the old market and still others say they don’t know. I guess we are not actually going to find out until they start construction. I still haven’t asked Ludy about that mall yet. She works at city hall, so I’m hoping she can shed some light on that.
I’m hoping this weekend to be getting some pictures of the ‘inside’ of the new market. If I can not get inside, then I will be sure to take some outside.
Well that’s the end of this post. I’ll put in 3 or 4 more pictures, add on all the do-dads, then publish it. Think I’ll check on tickets to Okinawa or mainland Japan, to see if they are cheaper than Korea, I doubt it, but it doesn’t hurt to check.
Salamat, Palaam

7 MARCH
American-sponsored Philippine Congress, circa 1916
1919 – The American-sponsored Philippine Legislature passes a Declaration of Purposes that official spells out the purported position of the Filipinos on the vital issue of the “Philippine question”–the grant of independence by the imperialist United States; the Declaration come after some five years after the Filipino freedom fighters have been completely subdued and the last shots of the Filipino-American War (1899-1914) fired; the Jones Act was passed in 1916 by the United States Congress, providing for the recognition of Philippine independence supposedly after Filipinos would have been able to establish a stable government; the Senate and the Lower House would be established and control over most of the executive departments be given to the Filipinos, with the notable exception of the important Education portfolio; the Bald Eagle nation stole the Southeast Asian nation’s virtual independence during the turn of the century when the U.S. decided to annex it and (secretly) provoke war against the fledgling Philippine Republic.

8 MARCH
A KKK document signed by the Supremo

1896 – The Supreme Council of the secret Philippine revolutionary society Kataastaasang, Kagalanggalangang Katipunan nang manga Anak nang Bayan (KKK), rules that Balangay Mahiganti, a KKK branch in Ermita, Manila, be elevated to the status of a Sangguniang Bayan (Sb.); Andres Bonifacio y de Castro, as the Katipunan’s Supreme President, discusses the newly elected officers’ duties, subsequently explaining why the Katipunan’s Supreme Assembly decided to require all KKK sections to remit fees paid by new members and those promoted to a higher grade to the Supreme Council; the decision comes less than six months before the Katipunan was forced to prematurely launch the Philippine Revolution against Spain following discovery of the society’s existence by the colonial authorities.