[smartads] During Mar’s birthday party at the Marju Krisel Hotel and Resort the children had a really good time.  They swam in the pool for hours and enjoyed every minute of it.  The only break I seen them take was the one to come out and eat.

Useless Knowledge: Spiders never spin webs in structures made of chestnut wood. That is why so many European chateaus were built with chestnut beams.  Spider webs on a 50-foot beamed ceiling can be hard to remove.  (I wouldn’t say this knowledge is useless.  I’d like to build a whole house with chestnut wood now.  It’s probably too expensive for me though). 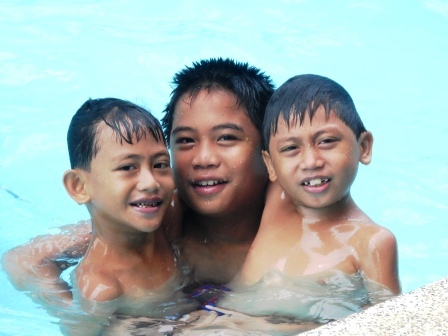 I just read this in an article:

Quote “A friend of mine with a small travel blog recently got contacted by an online advertising company which offered her a monthly advertising deal that, by itself, is equivalent to around 50% of the salary from her job. And all she has to do is paste a few adverts into her blog—a job that will take a few hours at most.  A 50% pay rise just for being easy to contact? Yes, contact pages really can bring in some amazing opportunities.” Un-quote.

This is exactly what I’ve been hoping for by doing this blog.  I guess that I don’t have the right material or maybe the right people just haven’t seen it yet.  Do any of you blog smart people out there know how I can maybe help myself in this area?  Something that I’m not doing already or something I am doing that I could improve on?  I really would appreciate any assistance in finding someone that would actually pay me good money to advertise for them.  I’d let them pick where ever on the blog they’d like for the ad to be.  I’d make their ad the only one on the blog if necessary and put it on here 2 or 3 times … whatever it takes, legally.

I also just read an article that says I should add a contact page to my blog to make it easier for readers to contact me.  Well I really don’t want to do that, but I hope that everyone knows that they can contact me through the comment section of this blog or at my e-mail address.  If you contact me through my e-mail, don’t send spam because most likely it will be deleted.   I found that if you send messages from a business address they tend to get marked as spam and sent to my spam folder, where they will most likely be deleted.  The safest way is through the comment section to start with and then if necessary we can continue it off blog with e-mails.  I’ve already done that with at least 4 other people and it has worked out just fine.

There was no school for J today for some reason.  Lita knew about it, but neither of them told me why.  Since he had to school, he took our broken fan downtown to see if it could be repaired.  He brought the motor and I cleaned the rest of the parts while it was taken apart.  Since I was already cleaning things, I went ahead and cleaned the a/c filter too.  It didn’t really need cleaning so bad, but I figured, what the heck, now it will be even longer before the next cleaning is needed.

So far, at around 10:30am, this day has the makings of a very boring day.  J did the shopping today and he impressed Lita with the amount of things he was able to buy with the amount of money he had.  I explained to her that he is use to shopping like a Filipino and she is still thinking like an American when she shops.  Lita is a very sweet lady and I love her to pieces, but even I can shop better than she can.  She likes to pick things up without looking at the price and she also has a fear of running out of things, so she tends to buy too much.  When J went shopping today, he basically just bought 1/2 kilos of things instead of full kilos.  Thus having a lot of money left over to buy other things.

I made some new soup today.  In spite of the fact that I did not have any potatoes, it surprisingly came out really well.  All I had was 3 chicken wings, 1 large carrot, 3 onions and 2 small tomatoes.  Oh, I found a can of jalapenos and I added some of the juice from the can to the boiling water that the chicken was cooking in.  When the chicken and carrots were almost cooked, I put in the onions and a couple of sliced up jalapeno peppers.  I was really shocked that it came out so well.

J came back with the fan.  It cost P250 to repair and it does work, but it’s suppose to be a 3 speed fan and there is only 1 speed working on it.  Unfortunately that one speed is ‘low’.  Maybe if it was stuck on the medium or high speed it wouldn’t be a problem, but not low.  J will be bringing it back to the shop tomorrow to see if they can further repair it.

I just got back from buying a “Red Pepsi” and I got the stares today.  I wonder what would happen if I walked to that same store everyday for several months, would I still get the stares?  Probably so.  Maybe when the mall finally gets built here in Bagacay, there will be more “white” people roaming around and I won’t be the center of attention anymore whenever I’m out walking.

I just figured out last night that Mar and Jose Rizal share the same birthday, June 19th.  It should be easy to remember his birthday now.

I forgot to mention this in the last post, but I never did get in the pool at the Marju Krisel at the party.  Lita and I did decide that that place would be excellent to have an adult party, at night.  There are many lights set up all around.  Actually I think most of them are gas lights that have to be lit.  How about it Blair and Gary, is it nice there at night?  I know Blair has stayed there and Gary must have been by the place dozens of times going back and forth to his house, so he probably has been by there during night time hours.  I was actually at this pool one time before and it was night time, but not a party.  We all just went swimming.  I don’t remember seeing any lights on then and I’m not even sure there were any then.  This was back in the year 2000.

I noticed that someone from Doha, AdDawhah (Qatar) searched for “grocery store pics in the philipp”.  All they got directed to was the picture of the little grocery by the Almeria Garden Hotel.  I just wanted to let them and everyone know that there are plenty of supermarkets here in the Philippines, but there are tons of sari-sari stores here also.  Somewhere in between the ‘super’ and ‘sari-sari’ markets is the local markets.  The air conditioned supermarkets are starting to get more popular and with the building of so many malls going on, there will be more and more of the air conditioned supermarkets in the very near future.

Useless Knowledge: “Long Tall Sally” was the last song played by the Beatles during their last scheduled concert, which took place at Candlestick Park in San Francisco on August 29, 1966.  (I think I had this one on here before, but it’s such a good trivia question and I wanted to be sure)

That’s all I have for today.  Please let me know if you have any questions about the Philippines or if you can think of something that I may be able to do to make money from this blog.  Of course I will continue the blog regardless of whether or not I am making money off it, but I’d really like to be doing both.

1899 – 10,000  Murata rifles, 6,000,000 rounds of ammunition, and other war supplies purchased by Mariano Ponce from the Japanese start sailing aboard the Nonubiki Maru from Nagasaki to the Philippines four months into the Filipino-American War  (1899-1914); earlier in  September 1898, Ponce and F. Lichaucho had sought approval  for arms purchase in a letter to Apolinario Mabini y Maranan, Foreign Affairs Minister and chief adviser of President  Emilio Aguinaldo y Famy, stating that Japanese  officials are inclined to favor the Philippine cause against the North American imperialist aggression although they only wish to avoid “the possibility of a conflict with…  the Yankee one”; unfortunately, the privately-charted Japanese steamer will sink during a typhoon in the South China Sea before reaching the Philippines, the Bald Eagle nation through Admiral George Dewey had some 13 months earlier forged an alliance with Aguinaldo to fight Spain, deceptively promising the then-revolutionary leader that the United States would honor Filipino independence, only to instigate the Phil-Am War and manipulate news about it in the bid of US President William McKinley to make the Senate vote for the annexation [read: invasion] of the Southeast Asian archipelago and to approve the Treaty of Paris; the New York Times will erroneously report that the report about the arms shipment is false based on a supposed story in a Tokyo newspaper, saying that while Japanese:

“...admire the pluck of the Filipino people, who belong to the same race and with whom the Japanese have had some close relations in the past [they] are not badly disposed toward the Americans.”