[smartads] If you read the last post you will probably remember that I was complaining again.  This time it was about the speed of my computer recently.  But the most suspicious thing of the Internet company now offers faster service at certain times of the day and now, at those certain times of the day, my system is running slower.  Maybe it’s just a coincidence.

Lita woke me up at 0720 because she said Vicky was leaving for a welfare meeting at 0800 and that it was busy out there.  Well I figured, heck it ain’t 0800 yet, so I got up and took my time about getting ready.  I have decided that I left a rat race in the US and I’m not joining another one here.  It took me about 30 minutes to get ready and by then Vicky was still here and there were no more customers.  See they handled it without me getting excited and rushing out there.  I have no real timetable for things here for about 95% of the things I do.  Things get done when I decide it time.  No more clock running my life.

As I said I would do, here is a better picture of the new Ciriaco van.  After I got this picture, I noticed some of the pictures on the van, so now I will have to get even better pictures of it.  Those are coming soon, probably by this weekend.  This one is an ugly color green, but with the way the color blends with the pictures on it, it actually, to me, looks better than the previous red van. 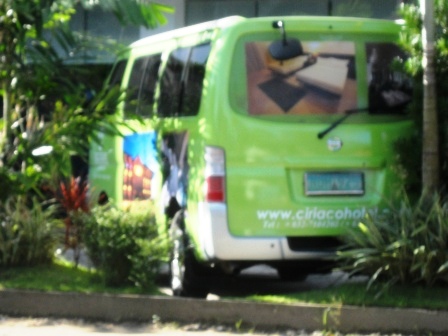 Lita told me today that she had to raise the price of some of the dishes that have vegetables in them.  They vegetables are now costing them more.  I hope that doesn’t continue.

Pet Peeve:  What is it with these Filipinos that are afraid to ask for something at the window of the store?  Something simple like a cigarette.  Are they that embarrassed?  Maybe they just think I’m too stupid to figure out that they want a cigarette.  If they know the name of the cigarette, just say it, it’s all the same language.  Don’t be embarrassed and wait for a Filipino to show up or just walk away if one is not around. 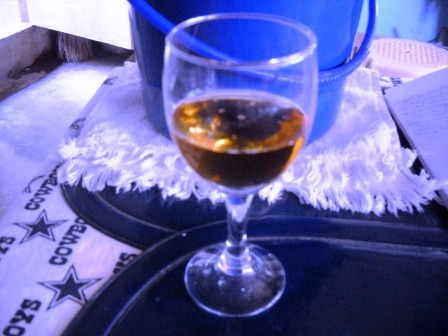 I’ve got a dang rash that I’m having a hard time with.  I need to get some cream or something to put on it, but I really don’t want to walk into the drug store like a cowboy that just got off his horse from riding all day.

Rain, rain is here to stay.  Yes that means it’s raining again.  We must have the best overhang around this parts.  Usually when it starts raining we get a crowd of people outside the store.  That’s okay if some of them buy something.  Today there are 6 people out there and only 1 of them bothered to buy anything.  They bought it on the food side though, not from the store.  When the rain stops or at least slows way down, they will all leave again.  Actually, there they go.  I am now alone alone again, instead of alone in a crowd.

Yes I do believe it’s the same guy.  “The Washer” is back to his windows today. 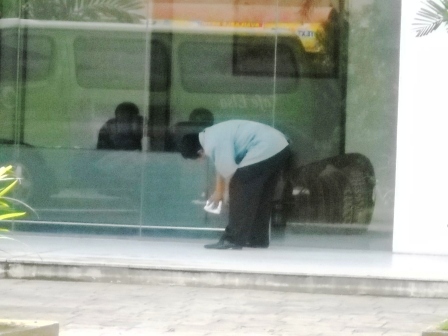 Pet Peeve:  How people just help themselves to the food in the display case.  It seems to be a standard practice here, but to me it’s harder to keep up with who gets what when there are too many hands in the cookie jar (so to speak).  It’s one of the standard practices here that I do not like.

Neneng got me some medicine for my rash.  I hope it works because I’m tired of scratching and just making it worse.  It’s not the cream that I wanted, but she says it will work and I trust Neneng.

It’s 8:52pm now and I’m here trying not to punch out my computer.  It has been so very slow with a lot, and I do mean a lot of, “Not Responding” coming up on screen.  I have been trying to figure out e-books and that’s driving me crazy too.  So all in all ….

I’m glad this day is over.  Not because it’s my birthday tomorrow, but because it’s been a very noisy, frustrating day.  When the bakery is here, I can hid away from all that noise.  Some of that hiding will be in a hotel or resort in another city and/or another country. 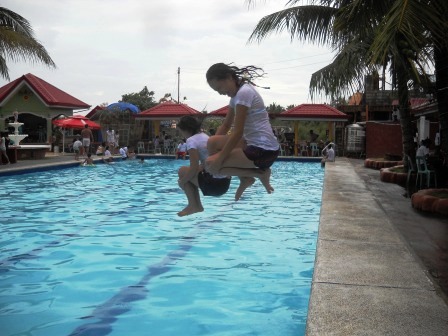 Filipino:  Quintin Paredes (September 9, 1884 – January 30, 1973) was born in Bangued, Abra to parents Juan Felix Paredes and Regine Babila. His outstanding service in Abra allowed him to be elected as a representative of Abra. Coupled with distinguished positions during the American occupation, he eventually had a solid platform with which to launch himself in the senatorial election of 1949. He won the election again in 1955 and was able to rise to the ranks of Senate President.

Texas:  James Butler Bonham  (February 20, 1807 – March 6, 1836) was a 19th-century American soldier who died at the Battle of the Alamo during the Texas Revolution. His younger brother, Milledge Luke Bonham, was a brigadier general in the Confederate States Army in the American Civil War, and served as Governor of South Carolina from 1862 to 1864.  The town of Bonham, Texas, is named for him. Bonham is the county seat of Fannin County, named for the commander who Bonham tried to enjoin for assistance at the Alamo.  “Flat Grove,” Bonham’s home in Saluda, is the only known birthplace of an Alamo defender still in existence. It is maintained as a museum.  In World War II, the United States liberty ship SS James B. Bonham was named in his honor.  Many Texas schools are named after James Bonham, for example, in the cities of Abilene, Amarillo, Dallas, El Paso, Houston, McAllen, Midland, San Angelo, San Antonio, and Temple.

Filipino: What is the name of the Filipino armed contingent that helped the Americans capture Aguinaldo?

Texas:  What was the name of the first cattle trail in the Texas cattle industry?

UseFUL Knowledge  A rock band amplified at close range is 140 decibels, which is 100 trillion times the hearing threshold and more than 100,000 times as loud as the level necessary to produce permanent hearing loss.