[smartads] I was up this morning at 0633.  I did the CR thing and turned on my computer.  After that I decided to go back to bed, it was 0639.  Finally at 0736 I had to get up because Lita wanted me to make pancakes again.  All the mix we had left was the 2 boxes that I bought at JustMar yesterday.  Now we only have 1 box left.  I only got 4 1/2 pancakes out of this box and they were thin pancakes.  I like the Pillsbury better for the money.  I ate 2 1/2 pancakes, Crystal and Khan ate the other 2.  Some guy came by early this morning selling fish and Lita decided to buy some of that.  When she bought it, I guess it made her mouth water for some fish and rice, because she decided she wanted that and not the pancakes anymore.  I had to go get some more of those tree leaves so she could put them in her soup.  I’m going to take a picture of that tree so y’all can see.  She always tells me the name of those leaves, but I forget too much.  Camalungay…or something like that, I think.  I’m going to go get that picture now, before I forget.  There…the picture is taken.  I downloaded it right quick just so I could post it now, so here it is along with another picture, so I won’t waste picture space.

Lynn sifting through the rice looking for bad rice. 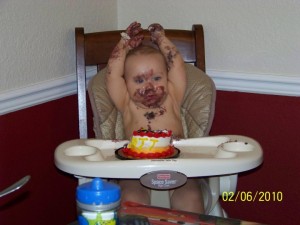 Wyatt eating at least some of the cake.

I had a hard time getting all the pictures in here, except the two of Wyatt.  The other 3 pictures came from Jaclyn’s Facebook account and for some reason when I tried to transfer them over, they were coming up only as ‘already tagged’.  I guess that if they are labeled that way, they don’t meet all specifications to be uploaded with the software I use, because these wouldn’t.  Anyway, I found a way around it, obviously, so now the world can see Matthew, Jaclyn and Wyatt Mock.

It’s been pretty boring around here again today.  I started not to do a post for today because it’ll be a short one.  I already told Jaclyn that I would have her pictures on here tonight, so I figured I’d go ahead.  It’s already 9:00pm and I have very little left to write about.

Lita went downtown today.  She went to buy a new light bulb to replace the one that was stolen.  She borrowed one from Ado, and she returned it after she bought the new one.  She also had to buy some tomatoes so we’d have some and to return the 3 tomatoes that I borrowed from Neneng yesterday, even though Neneng said it wasn’t necessary.  The only other item I know that she bought was some sugar.  She needs that to make the ice candy and a few other things.

One of the houses on the way home from downtown

Another house on the way home from downtown

I had onion rings for supper tonight.  Not much of a supper, but they were good.  They were much better than the last ones we cooked.  This time we just used flour and milk to coat the onions instead of that mix she used last time, for chicken.  I had to cook the onion rings myself and the grease was popping.  One time it popped so much grease out that it covered 2 of my fingers.  That was like 2 1/2 hours ago, and my fingers still burn.  I put some water on it right away, and some lotion after not too long, but it’ll probably still leave a mark there.  My right middle finger got the worst of it.

The BBQ business hasn’t been doing so great recently, probably mostly because it won’t quit raining.  Every night since we’ve been home from Tambis we have had a very hard rain that lasts for quite a while.  I think it discourages people from venturing out and thus affects our business.

Lita gave me a bottle of lotion for the computer room yesterday, but I see it is gone now.  I guess she changed her mind and took it back.  But I still have my Vaseline Men’s body and face lotion, I like the smell of that one better anyway.

This is the main gate to Bagacay Beach. It is down the road on the left from our house.

Since I’m stuck for material tonight, I’ll be following a suggestion that our newest reader, Jack (from Australia) suggested.   He thinks I should talk about my first visit here, how many times I’ve been here before we moved here, and whether my off spring have been here.  I’ll talk about the last 2 tonight and the first one tomorrow.

Okay my first visit to the Philippines was in 1984.  I’ll discuss it in detail tomorrow.  I didn’t visit again until 2000, but I visited every 2 years after that.  So 2000, 2002, 2004, 2006, 2008 and then we moved here in 2010.  We really didn’t decide we wanted to move to the Philippines until 2000.  We really did not want to move down to the province (Tambis) because it would be just too hard on both of us.  In 1992, we found out that Lita has some relatives living here in Calbayog.  She hadn’t seen them in a long time and was rather surprised to find them.  She even actually met Titing for the first time then.  I say she met him in 1992, and she did.  I did not make the trip with her to the Philippines that year.  We were stationed in Okinawa and she came over with one of her best friends.  She just won $5000 playing bingo at the Crow’s Nest on Camp Shields there in Okinawa and wanted to come take care of some things.  I could not get off work, so she just came with her friend Violeta.  She was a little scared to do it, but it was necessary at the time.  It turns out to be the turning point in our lives though.  If she would not have gone, maybe she would not have met her family here in Samar, and we would never have known about Calbayog City, and never thought about moving to the Philippines.  It’s was a break that we desperately needed and was lucky we had the opportunity to move here.

As for our off spring visiting here.  I doubt that will ever happen.  In 1992 when Lita came here without me, our son stay with me also.  The only one of my relatives that has been over here to the Philippines is my nephew David.  I don’t think he liked it very much, even though he tells me he did.  He didn’t give it much of a chance though.  My niece Jaclyn is suppose to come for a visit this coming May, although now she says that her husband Matt may not be able to come then because he is suppose to be changing  jobs and they don’t know what the new employer will say about them going on vacation so soon after getting the new job.  I’d like for our son to come visit, but he’d have to bring his wife and 6 sons with him, and he can’t afford that.  Two of those 6 are actually stepsons, but they call him Daddy and he is good to them.  Heck, he probably can’t even afford to come if it was just him.  We’d send him the money to come, but we can’t afford it either, not yet anyway.  Maybe by this time next year we will be able to do that.  Of course right now we have plans to return to Texas in January 2012 for 3 months.  Maybe we will take care of that then, if we can.

The small Pepsi truck still out front. Guy on far right is Jun, guy in center is Fred and I don’t know the misfit guy on the left.

Tagalog word of the day:  anak na babae  means daughter.  Evidently the word anak that I translated before does not actually mean ‘son’, it means like child, but it is widely used for ‘son’.  Guess ‘daughter’ has to be separated somehow.  So anak na babae  (a-nak na ba-ba-e).

That’s that.  It’s almost time to close up the BBQ, in fact I hear them doing it now.  Lita will be coming in any minute now with the money from the day so I can count it and put it in our log.  I hope it’s better than it has been recently.