[smartads] Eastern Samar (Filipino:Silangang Samar) is a province of the Philippines located in the Eastern Visayas region. Its capital is the city of Borongan.  It is located at the eastern portion of the island of Samar. Bordering the province to the north is Northern Samar and to the west isSamar province. Eastern Samar faces the Philippine Sea to the east, and Leyte Gulf to the south. 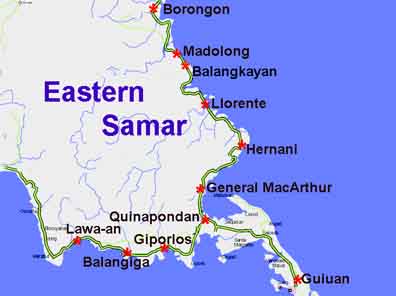 At about 0020 it started raining again.  It hasn’t rained since last Sunday night though.  No thunder or lightning as of yet, but I won’t rule it out for later.

I finally got the 12 Sep post out at 0053.  I guess that is not so bad though since I’m suppose to be typing all the events up to midnight. 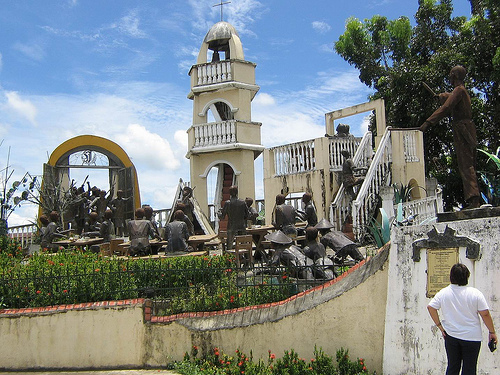 At 0550 this morning, we had a brownout and it looks like it’s going to be a long one.  I just happen to be awake when the fans stopped turning.  We got out the portable fan and put it between us, mostly pointing at Lita, and eventually we fell back to sleep.

When I got up and starting writing notes again, it was 10:48.  I have already been up for a couple of hours so let me get you caught up on the rest of the morning. 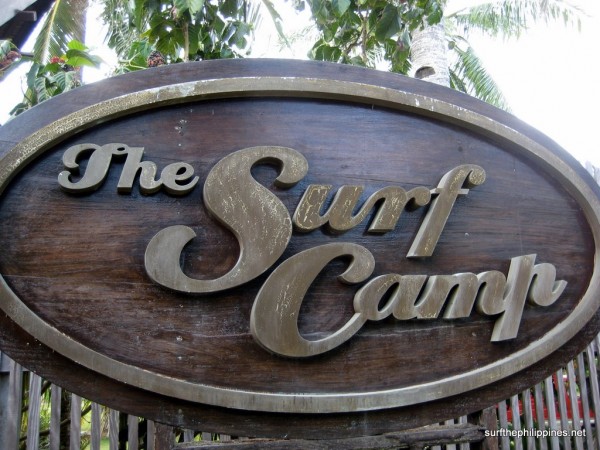 There is still no electric.  Neneng is telling me that it won’t be back on until tomorrow morning.  But as it turns out she didn’t really know, she was just ‘jerking my chain’.  A phrase that I’m sure she doesn’t even know what it means, but that’s what she was doing.  However, she really didn’t know when or if it was coming back on today.

If there is anything here in the Philippines that will make me move back to Texas, it’s these damn brown outs.  It’s just stupid to have to have them or have them because of low power.  That shouldn’t happen in a country like the Philippines.  They probably scheduled this one because of all the extra energy that was used during the 2 fiesta days.

Maybe if we started a letter writing campaign to President Aquino about the quality of the electrical power, something will be done about it.  I think that we should let me know that it is a major turn off for visitors and potential expats.  I wonder if he has brown outs at his palace?  If he does, I’ll bet he has a nice generator that gets the power back on quickly.  Most people in the Philippines can’t afford a generator.  Heck, most people don’t even have a hot water heater. Philippine Knowledge:  William McKinley’s term saw the United States involved in the Spanish-American War. After the war, the United States received the Philippines, Guam, and Puerto Rico from Spain. Cuba became free, but was not a U.S. territory. 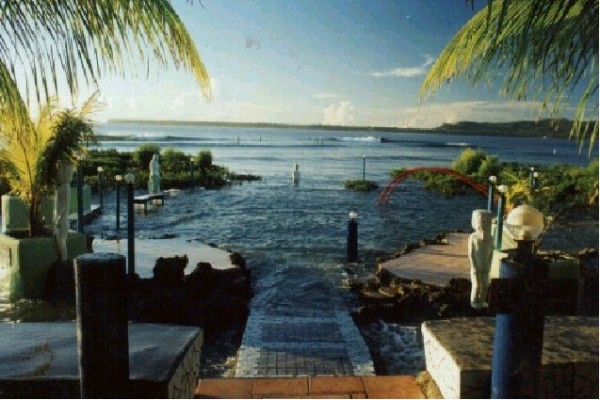 I’ve got nothing much to do, so I’m sitting on the bed, using a portable fan to cool off as much as I can.  This fan is pretty good, but nothing like when the power is on.  It’s is better than nothing though.

I can’t check my website or e-mail, I’m sweating so much the back of my head is soaked, there are no lights, there is no beef worth eating, very little food that I like to eat, not even anything good to make a decent sandwich, people staring at me whenever I go someplace, I can’t understand most of what’s being said … so what the heck am I doing here?  I really advise anyone thinking of moving here to think about things like this.  I’m sure there are more things to consider before moving.  That is why I suggest that you get one of the books written by an expat that can explain to you first hand about the things that they have encountered. 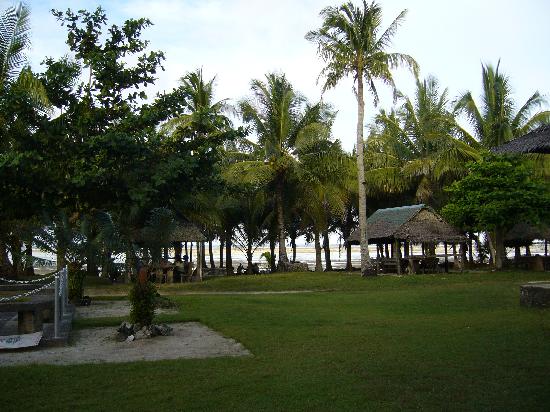 I don’t personally have a book that I have written, but I sure wish I would have gotten a book before I came over here.  I believe there is a book about moving to the Philippines among the ones flashing on the front page of the website.  Of course I’d like for you to get that one, but even if you don’t, you should get one somewhere.  I’m sure it will help you and probably save you some money too.  Of course it’s totally up to you.  If you think you know enough to move here without the book, like I thought I did, then go for it.  I can tell you that I was wrong, and maybe you are too.

I did have eggs for breakfast this morning and I got to use the Tabasco sauce that Mar bought for me.  The one he got tasted a little different than I remember, but then I realized it is because he got the new one for me, the habanero flavor.  That’s good though because I want to get use to a little bit hotter pepper.  The sauce is a good start.  Maybe soon I will be able to eat the habanero peppers as easily as I eat the jalapeno peppers.  I loved it anyway.  I’m going to use either the BBQ sauce or steak sauce along with more Tabasco tomorrow. 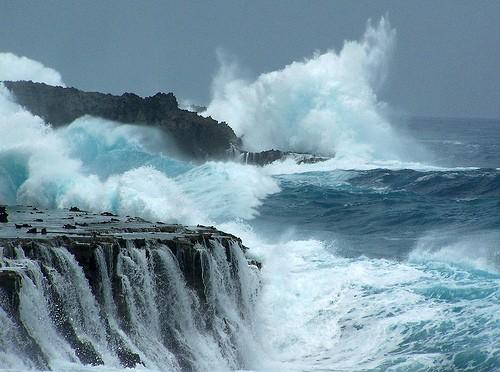 The power came back on at 12:57pm.  Of course it went right back out again at 1:30pm.  But it only lasted about 8 minutes the second time.  I was already cussing up a storm.

Some Senator’s son is having a birthday party at the Ciriaco.  There are a lot of the Philippine National Police (PNP) there.  There are so many M16’s and M60’s there, I’m scared to take a picture.  I don’t want them to think anything bad.  There are at least a dozen of them and that’s not counting the regular security guards with 9MM pistols.

I’m sitting here in LolyKat watching them and I’m also watching Precious write.  All her writing is just scribble, but she can read it, or at least acts like she can. 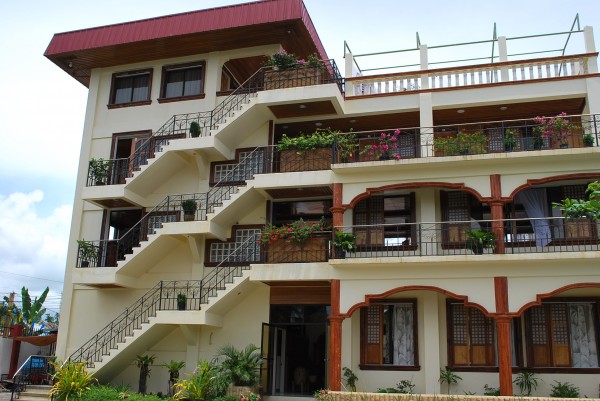 After the lights came back on the 2nd time, I spent like 3 hours sitting in front of the fans, air con and the TV, just enjoying the cool air and the ‘mostly’ quiet.

At 4:48pm, Lita, who had been laying next to me for the past hour, decided that she wanted to make some popcorn. Popcorn is popular in this household and in fact, the whole compound.  This popcorn will be the only thing I’ve eaten today since the eggs this morning (about 6 hours ago).  Most likely it will be the last thing I eat today, unless I decide to get a peanut butter sandwich or something light like that.

Lita and I talked with a couple of the PNP for awhile.  They were all taking their breaks and/or eating over here.  A couple of them even decided that this would be a good time to get caught up on their sleep.  The 1 PNP that we talked to the most, he had an M-60.  It was on the ground by my feet as I talked to him.  We mostly talked about when I use to be in the military and about the M16 and M60.

As we were talking, he got called over to the hotel, it was time to go.  After they were in the truck and ready to go, one of the guys decided he wanted another banana-que, so he got out to come back.  After he got out, 3 of the others decided they wanted one too.  So he ended up buying 4 of them right before they headed down the road. 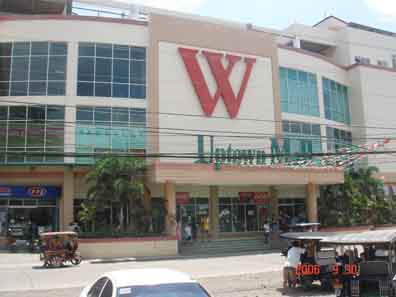 It’s 8:30pm now and after eating that popcorn earlier, I didn’t feel too much like eating, but I did make a couple of peanut butter and banana sandwiches.  I’m not suppose to be eating that late, but the devil made me do it.

I just inserted another story sent to me by Winda.  It’s the one about Calbayog Samar as Waray Music Capital.

I learned today that WD-40 will kill the ants. 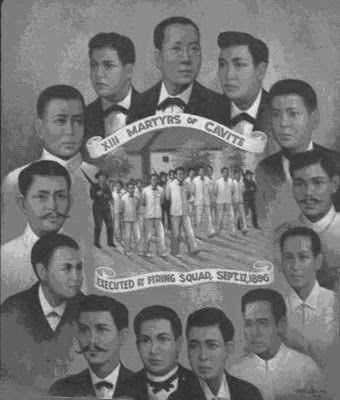 1896 – The “Thirteen Martyrs of Cavite,” Filipino members  of the secret society-turned-revolutionary government and armyKataastaasang, Kagalanggalangang Katipunan nang  manga Anak nang Bayan (KKK), are executed by Spanish colonial authorities at Plaza de Armas, near Fort San Felipe, Cavite City, 12:45 noontime; the 13 Katipuneros: Maximo Inocencio, Luis Aguado, Victoriano Luciano, Hugo Perez, Jose Lallana, Antonio San Agustin, Agapito Conchu, Feliciano Cabuco, Maximo Gregorio, Eugenio Cabezas, Severino Lapidario, Alfonso de Ocampo, and Francisco Osorio,  planned to launch a concerted uprising in Cavite province on September 1 (later moved to September 3-4) in the house of Gregorio but were arrested when their plan was discovered through a dressmaker named Victoriana Sayat and the resulting forced confessions from the initial arrests of Ocampo and Lapidario; after execution, the lifeless bodies of the patriots would be carried into a garbage cart, guarded by six rifle-and-bayonet-armed Spanish soldiers, and brought to the Convent cemetery at Caridad, with Gregorio, Cabuco, San Agustin, Conchu, Cabezas, Lallana, Lapidario, and de Ocampo to be dumped in one hole while the those of Inocencio, Osorio, Aguado, Perez and Luciano to be taken by their affluent families and be buried in separate coffins.