[smartads] She grabbed the dust pan and was looking for the broom.  When she found them, she had a hard time controlling them both at the same time.  That’s her kuya Khan in the background.  He was fanning the embers on the coal to get the fire under the pot going again.  Once he got it started, he turned it over to Vicky.  See the enormous bag of banana’s on the table?  They peel those, slice them long ways, coat them with brown sugar and fry them up.  It is a very popular treat and they sell quite a few of them each day they have them.

Useless Information: The men under contract to an NFL team but who don’t suit up for games are called the “taxi squad.” 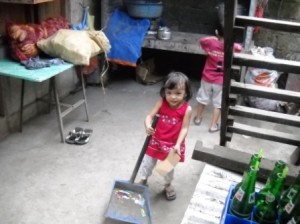 31 Jan – I stayed up until 0515, why I don’t know.  I guess it’s because I took a long, late nap during the day.  At 0500 I checked the hits on the blog and they were at 107267.  I took my medication before I went to bed, since it was already morning anyway.  I will try to remember to take the following medication every morning: Allopurinol, aspirin, Salmon capsule and my blood pressure medication.  I probably do not need the blood pressure medication anymore, but I will continue to take it until after I see a doctor and he/she says it’s okay not to.

Since I did not go to bed until 0515, I do not get up until 10:10 this overcast day.  The weather recently has been rather pleasant.  Not too hot, not too cold.  Of course it really doesn’t get cold here, unless you are up in the mountains.

For dinner today, my only meal of the day, Lita cooked the chicken that Marianne brought me for my birthday.  We didn’t have the corn meal or bread crumbs to coat them in, so Lita just fried them.  What they were were pieces of chicken meat wrapped around what passes for ham here and that was wrapped around some cheese.  It tasted okay the way Lita cooked it, but Marianne’s way is better.  I guess because it’s the original.  Lita way probably would have been better if there was a jalapeno in there with the cheese.  Actually if you have that with the jalapeno and wrap the whole thing with bacon,then bake or broil it, that’s one of the best things I have ever eaten.  Lita started making those for me while in Texas and they are so very good.  Also actually in Texas there was no ham in it either, just the chicken wrapped around a jalapeno and cheese, sprinkled with more cheese.  See why I weighed so much?

Today we keep getting power spikes and it caused my computer to turn off each time.  All together there were 5 of them.  I have my computer plugged in to a battery backup, but the surge protection part was having problems before, remember that?  So when we get the spikes, the computer turns off.  Also each time it went off, I had to reset my modem for the Internet.  It was getting to be very upsetting, but I survived through it.

They are having a disco at the Ciriaco tonight.  We can hear the music and see the flashing disco lights through the top floor windows where the dancing is taking place.  I’m not sure if it’s a weekly thing or not, but I don’t think so.  It’s probably just people that reserved for a party.

It’s making an attempt to rain again today, but so far it’s just misty.  It hasn’t been doing any serious raining the last few days, mostly just mist.  We’ve had plenty of rain anyway, so that’s fine with me.  We don’t need anymore for now.

Lita told me that there are some people from Denmark staying at the Ciriaco, maybe I’ll get to meet them before they leave.  They are there for yet another wedding.  This is like the 3rd, maybe 4th wedding that has been at the Ciriaco since they’ve opened for business.

Tagalog Word of the Day: Amerikano (Ah-mer-i-ka-no)  obviously it means American.  Mostly us Americans just call ourselves, Kano.  So I am an Kano Expat living in the Philippines.

1 Feb – I have no idea what time it was when I got up.  All I know for sure is that I did get up.  Yes I did remember my medication.

I was getting those power spikes again today, so I turned the computer off and plugged everything back in to the surge protector outlets on my UPS and so far, so good.  Last December the computer kept turning off on me when it was plugged in there, but so some reason it’s working.  I’m happy it’s working, just curious, why?

We received our electric bill today.  If you remember last month the bill was P2K and something, but after all those dang fees they added on, it was over 6K.  Well this month, the total, after all fees is P2964.46.  That’s a much better total for me to live with.  This past month we used the a/c very little, so that helped quite a bit.  We stilled used the fans almost non-stop and people around here have a problem with turning lights out.  We did get our new cooler for the BBQ area today, so that may affect our electric bill.  I don’t know how much yet though.  Lita plans to unplug that cooler every night around 11pm to save on the electric.

Remember those people I was talking about from Denmark?  Well I did get to talk with them today.  I was in here on the computer, as usual, and Cathy came in and asked me to come out there because she was talking with them and she was having the old “speaking/understanding English” problem.  So I went out there and there are 3 of them, 2 guys and a lady.  One guy did most of the talking with the lady adding a comment or asking a question every now and then.  I didn’t get any names, but they all seemed like pretty nice people.  Yes they were there for a wedding and it was going to be held outside on the ocean side of the Ciriaco.  He mentioned that they are not finished with the resort part of the hotel yet, but of course I already know that.  He asked me about living in the Philippines and wanted to know if I liked it.  As we were talking, it began to mist, so they headed back over to the hotel.  If the wedding was today, it must have turned out okay, because it only did that little mist and then it stopped.  I didn’t hear any hoopla going on over there, but I confine myself in my computer room, so I could have missed it.

I was torturing myself this evening.  I was looking at a menu from Osan AB in Korea.  They have many of the American style foods that I like there.  We will be visiting there in 3 months and I was just looking around trying to figure out how to get to the base (they have a bus that goes from Seoul to the base for $25 per person).  I also wanted to see what the billeting (base hotel) looked like.  I forgot to get the prices, but they were pretty nice looking rooms and they have free washers/dryers, plus a shoppette (small BX) that is open 24/7, inside the billeting main building.  While I was checking things out on base, I noticed that the Houston Texan cheerleaders will be there this month and that on Feb 12th and 13th, they will be having free movies at the base theater for everyone on base.  Maybe that free movie thing is a monthly occurrence.  We won’t be there for 3 for months, so I’ll keep checking just to be sure.

Useless Knowledge: Helen Hunt, award-winning costar of the TV sitcom Mad About You and the film As Good As It Gets, appeared on The Mary Tyler Moore Show when she was 7 years old as the daughter of Murray Slaughter.

1900 – Pio Claveria, Military Government delegate of Iloilo province, Philippines warns the chief of Tigbauan town that if he and other residents do not retract their recognition of the sovereignty of the enemy imperialist Americans, they will be punished in accordance with “a most summary trial and execution as traitors to the country“; the enemy Bald Eagle forces under Brig. Gen. Marcus P. Miller began invading Iloilo on February 11, 1899, with the local Filipino freedom fighters being led by Gen. Martin Delgado and Teresa Magbanua y Ferraris; the written warning that came nearly a year in the bloody and protracted Filipino-American War (1899-1914) adds that:

‘”As the government which the invaders are endeavoring to establish is always provisional, if all the inhabitants of this province are true Filipinos, they can easily and simply answer that we are subject to the will of the Honorable President Senor Emilio Aguinaldo, whom we follow and recognize in this new born Republic as the President of the Nation.”‘ 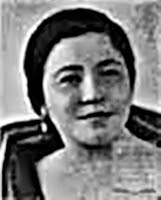 1946 –  Maria Paz Mendoza-Guazon, Filipina suffragist, doctor, educator,  scientist, writer, social reformer, feminist, philanthropist and civic  leader, is appointed the first female member of the Board of Regents of the University of the Philippines; Mendoza-Guazon is also the first Filipina to acquire a high school diploma, the first woman graduate of the UP College of Medicine (1912), and first woman to receive the degree of Doctor of Tropical Medicine; in the 1920s, Mendoza-Guazon also figured in the 1920s struggle for women’s suffrage during the American colonial period.
Photo credits:
http://en.wikipilipinas.org/index.php?title=Maria_Paz_Mendoza_Guazon
http://philippineamericanwar.webs.com/thewarinthevisayas.htm (raw photo of Iloilo)