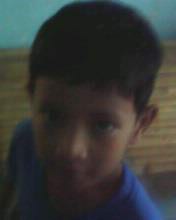 This past Monday I needed to go downtown to get our medication.  Lita prefers that I be the one to get them.  That’s fine with me though because it gives me an excuse to get downtown.  If was an overcast day, but there was no rain yet so I decided I wanted to walk.  Just as I normally do I ask others if they want to walk with me.  Everyone always had said no in the past, but not today.  Today Khan Khan, one of my godsons, decided he was in a walking mood and wanted to go with me.  Well his father was working and his mother was not home, so I just informed a couple of the adults hanging around, I think it was Chatty and Neneng, that he would be with me walking.  No problem.

So off we went and walking with a child obviously means that I have to slow down a little bit, but he did a good job of keeping up and he listens pretty well to what I tell him, so this was going well for us.  We didn’t get far though, almost to the ocean, when we see Saddam.  Well whenever I see Saddam, I always get a ride with him because I know he needs the money for his family and he is a relative.   So we rode in, all the way to Mercury Drug.  Saddam wanted to wait for us, but I told him not to because I didn’t know how long it would be and I wanted to walk around town a little more afterwards.

So we go inside and order the medication and the lady actually asks for my Mercury Drug discount card.  Usually they don’t ask, but again usually I forget to bring the card, just like today.  I forget it again.  On a side note: there are some days that I bring it and forget to present it when purchasing.  Khan Khan is looking around at the candy.  He has P15 that is burning a hole in his pocket.  He restrains from buying anything though.  I started to get him a candy bar or something, but I already had something else in mind to do when I was heading downtown anyway.  I suppose I can just bring him with me.

So after getting the medication, we walk to Carlos n’ Carmelo’s to order some cheese sticks.  The door was unlocked, but they were closed.  It was too early in the morning.  It was around 0900 to 0930.  No problem.  We just went next door to SO Cafe, they are open.  We got one order of cheese sticks to share, an ice tea for me and a strawberry icee looking thing for Khan Khan.

The drinks came early and while we were waiting on the food, an expat walked in.  Of course I don’t remember his name, although he did introduce himself, but I do remember he was there to meet the President of the local Rotary Club.  They had some business to discuss about the Rotary Club.  I met the President when he arrived and introduced myself, but right about then the food arrived, so Khan Khan and I got busy on that.  Before we left I was informed that the Rotary Club meets every Wednesday night at the SO Cafe, 7pm.  I was invited to attend, so I suppose that anyone that is interested may do so.  Oh, before we left Khan Khan allowed me to pay for the food.

So it’s time to head home.  We stop off to buy a couple of lottery tickets and that brings my money down to P8.  Khan Khan still has his P15 though, in case we need to take a tricycle for some reason.  We get to walking and I’m thinking that this kid is starting to get tired.  He insists that he is not though.  We make it to the highway and I explain to him what side of the road he should walk on, and why.  He said he understands, but I guess I’ll find out if he actually applies it later.  No Saddam in sight, which is good for me because I still feel like walking.  Although the skies are starting to darken, we continue walking and let a few empty tricycle go by.  I asked him several more times if he is tired, but he said, “No”, so we continued.

Right about the time we were getting past the 2nd cemetery, it started to rain.  It was hard, but not like raining cats and dogs.  I asked once more if he wanted to continue walking and he didn’t mind walking in the rain at all.  I was worried that he could get sick from being wet, but we were not that far from home by now.  It stopped raining, then started again even harder than the last time.  Still no problems.

As we got near the house, it stopped raining again and he just ran the rest of the way home.  I reminded him to take a bath and change clothes to help prevent him from getting sick.  Everything turned out great and he never did get sick.  I think that if he asks to go with me next time I would have no problem with that.  It was quite a bit slower than I normally walk, but I suppose as long as I’m out there doing some kind of exercise, it’s better than just sitting here in front of the computer.

So what’s up with the smaller pictures on here?  Stay tuned for next post so I can bring you up to date on my camera woes.