[smartads] Raven is the oldest son of the 4 children of Ramil & Robbie Apilado.  He has 2 brothers (Joshua and Reverof)(check that name out backwards) and 1 sister (Faye).  Raven is my favorite of all their children for the simple fact that I’ve never heard him cry.  I’m told that he does cry, but not often.  Well he doesn’t cry around me, while most of the others cry on a whim.  Joshua doesn’t cry either, at least that I’m aware of.  Raven is pretty much a normal kid around here, but he’s a little shy.  If you watched the video of the children singing the Philippine National Anthem (kind of), then you can see he is shy. I re-posted the video today, so you can access it from the front page easily. 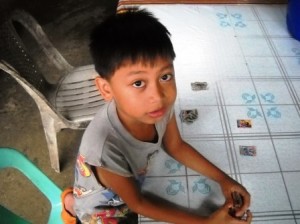 Useless Knowledge: The Arctic tern holds the long-distance medal for travel, as he migrates from Antarctica to Massachusetts, logging up to 22,000 miles in stretches of up to 1,000 miles per week. Unfortunately, he does not rack up frequent flier miles!

2 Mar – Hits @ 0200 = 169300. I woke up at 0738, but laid in bed until 0827. Lita was already up, but she laid back down a few minutes and we talked about a few things. Already that morning she had talked with Jazel about getting another more experienced person to be the yaya to replace her. Yes, that’s right, the same thing she gave me the 3rd degree about yesterday, she suggested to Jazel today. At least she gave me credit for being the one to think of it.

Lita is heading downtown now with Cathy. They will be dropping the kids off at school, the going to Judith’s. Lita will be getting Poppa’s prescription. I’m going to the Metro Bank ATM to get some money and just turn around and give her the bulk of it, maybe. I need to save some to be sure that I get to at least 1 of those restaurants. I’m actually hoping for 2 every month.

I was just looking at my computer and saw the Google ad for the Dream Bakery & Cafe. Remember the one that I said was my new dream home? I wonder if I’ll get a chance to go there anytime soon. I’ll bet I do get to go before the end of this year.
I did a little work on the pages of the website. I gave recipes it’s own page. Also added “Restaurants not in Hotels” page. All the restaurants that ‘are’ in hotels will be listed under the hotel in which they are in.

The McDonald’s in the picture for the video commercial is in Tacloban. I’ve been there are few times, but I don’t particularly like McDonald’s, except for the drinks and fries. I showed up there one day with a large Shakey’s pizza, sat down and ate it. Yes the whole thing. I found out later that someone who saw me bring the pizza in, followed me all the way through the restaurant to my seat to tell me to leave because I couldn’t eat that pizza in their restaurant. I guess they thought I wasn’t going to order anything, just eat the pizza or maybe it was embarrassing to have a Shakey’s there…I don’t know. Anyway…evidently when they saw that I was there with about 20 other people and they were all eating McDonald’s, they changed their mind, because I was the one paying for all their food. I think some Tagaloging went on that I wasn’t aware of at the time. That was in 2006.

I was downtown, but now I’m back. It’s 10:57. I didn’t do much downtown. I got some money, I got the prescription and I bought some bacon at Monterrey Meat Market. I looked for some Doritos at Mercury Drug, which is usually the only place that has them, but I couldn’t find any.

I bought 2 packages of bacon and I almost bought some beef cubes, but they were mostly bone and not the ones I’m use to buying at HEB or Wal-Mart in Texas. Those beef cubes are all beef. I would have gotten some anyway, to use for my stew, but they wanted P190 ($4.40) for a small packages of basically bones, so I figured that that was too much. I don’t like beef so much that I’m going to be stupid about how much I pay for it.

Lita is still downtown shopping at the open market and will be taking a tricycle home.

I went by the little sari-sari store where I normally get my fix of “Red Pepsi” (which is what I’m calling Coca-Cola these day, around here), but they were out of the 1 liter “Pepsi”. I didn’t have enough money with me to get the 1 1/2 liter “Red Pepsi” so, I bought a “Green Pepsi” instead (Sprite). Next time I’m heading that way to get the drink, I will be sure to bring enough money, just in case.
Well since this is actually 3 March, not 2 March, that means that I went downtown today and didn’t take a nap, so I’m getting tired. Maybe I’ll actually get a decent amount of sleep tonight. I’m going to start closing this up already and I’ll do another one tomorrow for the actual March 3rd and maybe the 4th, if it’s a slow day tomorrow, because the 3rd has as much information as the 2nd did, at least. Gotta go to sleep now.

Oh, by the way, I just pulled random pictures off the internet for the pictures today.  No rhyme or reason, just pictures.  Except for 4 of them.  Also I put extra pictures to try to make up for a short post today.

Useless Knowledge: The sensitivity of the human eye is so keen that on a clear, moonless night, a person with 20/20 vision standing on a mountain can see a match being struck as far as 50 miles away. Much to their amazement, astronauts in orbit were able to see the wakes of ships.

1945 – The United States forces retake from the Japanese the island fortress of Corregidor in the Philippines, American colony since the turn of the century; the American forces led by Gen. Douglas MacArthur returned to the Philippines in November 1944 with the plan to launch major attacks on the islands of Luzon and Mindanao; after Manila was captured away from Japanese hand, the 38th Division of the U.S. forces landed on Luzon’s Bataan Peninsula and Corregidor recaptured using two attacks–parachute drop and amphibious landing; Corregidor had fallen to the Japanese Imperial Army on May 6, 1942 as World War II swept through the Pacific, with Japan pounding the American military bases as part of the campaign to invade the Southeast Asian archipelago and MacArthur fleeing to Australia.