[smartads] Please be sure to click on the pictures to get more information about them.  There is some additional information on all the pictures.  There is a Texas Longhorn video at the end of the post.  I don’t know if it will work on here, but it’s a nice little song, especially if you like the Longhorns.

Later Lita asked me if I wanted to eat some eggs.  I told her that I was tired of eating eggs.  I wanted to eat something that I didn’t have to cook.  We don’t have anything in the house that is ready to eat, everything seems to need to be cooked first except the peanut butter sandwiches.  Lita said she would cook.  She would make me some french fries.  It’s not that I mind cooking, I was just trying to save on the charcoal.  But I went ahead and cut up 2 potatoes, an onion and 3 peppers.  I cut them a little large today because I felt like having the larger ones versus the smaller ones I usually cook. 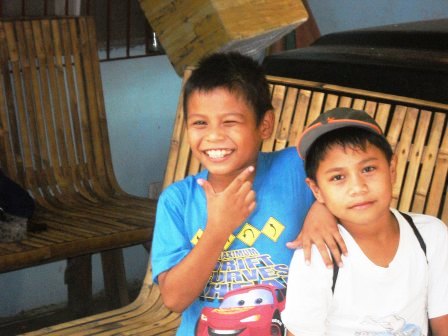 After they got all finished cooking, Lita was going to take them off the cooker to bring in the house, but as she took them off, her arthritis acted up and she dropped the whole frying pan on the ground.  Fries, onions and peppers everywhere.

There was only 1 potato left so I told her that I would just eat peanut butter.  She said she wanted to cook the last potato, so I cut it up also.  I had to cut them small though to try to make it look like there was a lot of them.  To make a long story even longer,  I just cut up and cooked extra onions and peppers to compensate for the lower amount of potatoes.

As I was preparing to eat, I decided to use BBQ sauce and I opened the last bottle of A1 sauce.  The sandwich that I ate with a little BBQ sauce AND a little A1 sauce tasted the best to me. 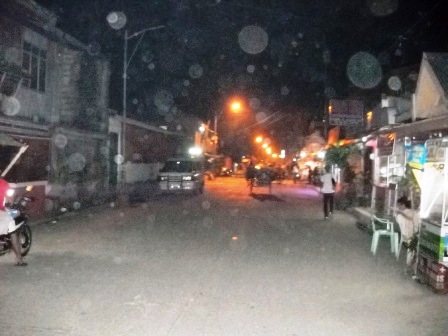 Remember I told you that Poppa was sick?  Well they finally talked him into going to the hospital.  They brought him in to the Emergency Room and he was there for about 2 1/2 hours before they finally go him into a room.  From what I understand, they had to do the EKG they were doing on him, 3 times because the machine messed up the first 2 times.  Now that’s some high class equipment, ain’t it?  Not!  They had to help him with his asthma also. 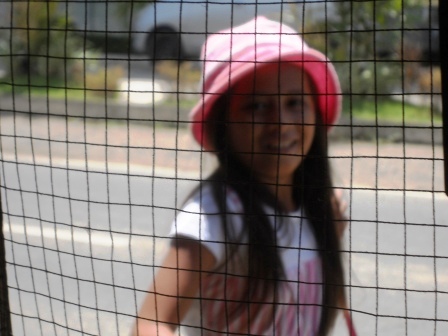 There were, at the peak, 12 people there to see him at the hospital.  While we were waiting, I took a few pictures of the surroundings outside the hospital.  Grace, Jay and I walked out of the area to go buy a Coke.  The first place we went, right across the street, was out of Coke, but there was an American, an Australian and a Filipino there getting drunk on San Miguel.  They invited me to stay, but I couldn’t.  I didn’t have any money anyway.  I took their picture and told them I would be putting it on this website, so here it is, but it didn’t come out very well at all.  But I told them it would be here so … 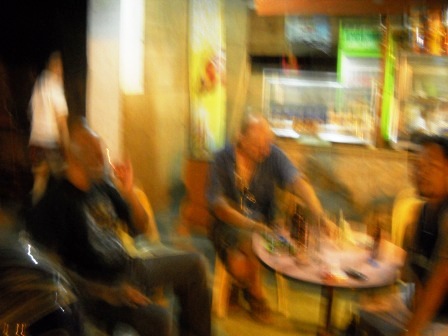 American, Australian and Filipino getting drunk

After leaving there we went a little further down a road that I have never walked on before and found a place that sells Coca-Cola.  They had 1.5L and 1L.  I bought a 1L and it cost P27 plus P6 for deposit on the bottle.  I was P7 short, but Grace let me have it.  I paid her back later even though she didn’t really want to take the money.

When Lita and I, mostly I, finished drinking the Coke, I went to return the bottle.  A couple of the youngsters, Grace and Jay, wanted to return it for me.  I guess either because they think I’m too old to be doing such things or maybe they were just worried about something happening to me if I went by myself.  Why people worry about me so much, I don’t understand.  I think they are being overly cautious, but maybe it’s just me not being cautious enough. 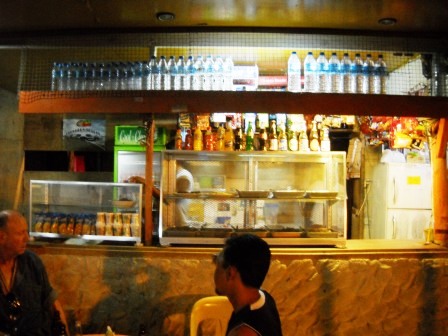 After Poppa got to his room, we all hung out in the room for awhile, then about half of us left.  It was kind of crowded in that little room anyway.  It’s a semi-private room, 3 beds, but when we left he was the only person in there.

Lita and Marianne took a pajak-pajak to Judith’s house and Ludy, Ramil and I walked.  Marianne was going to walk, but no one wanted Lita to ride by herself and Marianne got volunteered (she was the youngest there).  I forgot to get the camera back from Lita or I would have taken 2 or 3 more pictures during the walk. 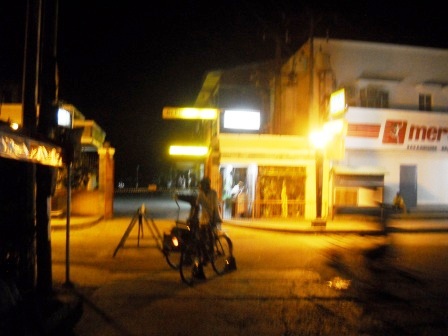 Walking from the Coca-Cola place

When we got to Judith’s house, Juvic was there and greeted us with the customary mano po.  Juvic has a fever and is not feeling good, but she still is looking good.  I told her I was going to say that on here.  See I told you I would Juvic.  Besides being a little more quiet than usual, she was still her same sweet self.  They bought some roast chicken for Lita and I to eat while at Judith’s house.  Everyone else already ate, so it was just Lita and I.  I don’t really like it when no one else will eat until I finish eating.  I’m going to start refusing to eat unless everyone eats at the same time.  They don’t do it all the time, but they shouldn’t ever have to do it, unless they are having a lot of stinky fish, then I appreciate it when they eat separately.  We had the chicken, rice and a Mountain Dew.

Ramil brought us to the hospital in his Dad’s Maverick, so he brought us home also.  There is something wrong with the Maverick.  It sounds like the transmission is ready to fall out of it and when you press down on the brakes there is a lot of screeching.  I don’t know about the transmission thing, but it sure sounds like those brakes need new pads or shoes or whatever they have on there. 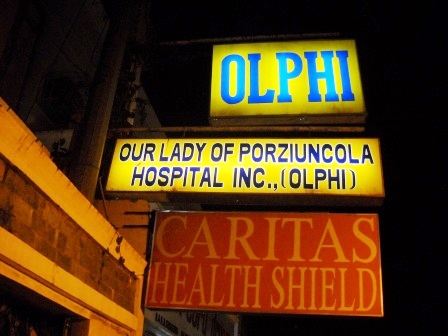 We did make it home though.  Emei was out front when we arrived.  He and I talked about things for awhile until he decided it was time for him to get to bed about 9:30pm.  He has to work tomorrow.

We missed 100 Days to Heaven, so we don’t know if the big secret was revealed, but I doubt if it was yet.  Maybe by the end of next week.  Certainly by the end of the week after that.

Jay will be staying with Poppa in the hospital tonight, just in case he needs something. 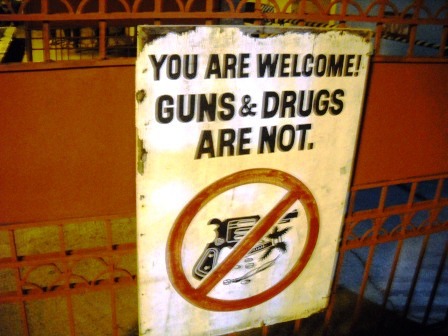 I think beside needing to get pictures of the way RFM looks now, I need to get some pictures of Calbayog Proper during the evening hours.  I don’t get downtown much at night and I’m going to try to get more pictures next time I’m there.

1901 – Two years & 7 months into the  Philippine-American War (1899-1914), the patriotic townspeople ofBalangiga, Samar successfully attack the quarters of enemy Bald Eagle soldiers taking their breakfast at a convent house; Gen. Vicente Lukban will later writeabout the guerrilla-style offensive wherein the Filipinos, led by local chief of police Valeriano Abanador and two guerrilla officers under Lukban, killed around 70 American  invaders, including a major, a captain and a  lieutenant, with only five badly wounded able to escape in small boats to the adjacent Leyte province of  Leyte, and seized 20,000 rounds of ammunition,  sabres, and, in short, everything in the barracks of  the enemy and in the quarters of the American  Major” [number of casualties and survivors later shown as 48 dead and 26 survivors, mostly badly wounded].

1898 – Anacleto Solano, leader of the interim local revolutionary government in the Philippine province of Albay, signs  the act of adhesion of the local people to President Emilio E. Aguinaldo’s government; the adhesion comes 3 1/2 months after Aguinaldo declared the Filipinos’ Independence from colonial Spain but but a month after the Peace Protocol and the Mock Battle of Manila wherein the treacherous Americans falsely made it appear that their forces were the ones who subdued the  Spaniards and not the Filipino revolutionaries, and some four months before the bloody and protracted Filipino-American War (1899-1914) will be secretly instigated by American regimental commanders upon the vile order of imperialist Bald Eagle President William McKinley in the bid to push the United States Congress to approve the annexation [translation: invasion] of the Philippine archipelago.