[smartads] In yesterday’s post I was just finishing up talking about my other blogs.  Well since then I made a couple of minor changes to those.  These new blogs are starting out different than this one did, but I hope to have them at least as good as this one.  Even though I won’t be putting as much information into those blogs, at least not right now, I will try to keep them all current.  That means I’m going to have to budget my time.  I can do this, I can do this.

They must be trying to save power for Christmas Eve and Day because when I woke up this morning around 0800, we were browned out.  Jay told me that the electric had been off since around 0600.  I guess it didn’t get too hot, so I didn’t wake up.  Supposedly it is a scheduled outage (those are stupid to have to have in my opinion) and it’s suppose to last until 6:00pm.

I am now in LolyKat watching Lita hammer some nails.  I’m trying to not say anything stupid while she is holding the hammer.

I wandered around the area where they load/unload the Pepsi trucks and took a few pictures.  I took a picture of the Fran Jessy logo and a cage that Titing says is for pigeons, but I think he’s yanking my chain.  I believe it to be for chicken/chickens.  I’ll find out later what the heck that’s all about.  Here’s a picture of the cage being constructed and that logo.

I just realized that I have already posted the logo picture, but there it is again.  I got ahead of myself.  That’s why I’m desperately trying to catch up here so I won’t be repeating things.  I also noticed, but didn’t get a picture of, the mud flaps on that big truck where this picture came from, the one on the left says Fran and the one on the right says Jessy.  I never noticed that until this day.  It’s strange the things you can see if you actually look.

The Supervisor of the Blue Team bought Casandra a toy that moves (it looks like Cinderella carriage) and all the other kids want to play with it.  Precious can not understand why she can’t have one also.  Many tears are falling, all coming from Precious.  Eventually Casandra lost interest and Precious ended up taking over all the toys in the area.  I took 2 pictures of her with the toys.  I remember I used one as a feature picture a post or 2 ago.  This is the other picture.  She only has the carriage in this one, she had all the toys in the other.  Plus she’s not smiling in this one.

I borrowed some water from our cooler.  I told Lita that I would return it later, but it might be a slightly different color though.  I was thirsty and to me when you’re really thirsty, a nice cold glass of water is better than any soda, beer or any beverage that I’ve ever had to drink.

I just saw a bunch of white people going into the Ciriaco.  They must be having another wedding in there.  That place sure is popular for weddings.

Oh Crap!  I just spilled Mountain Dew all over my notes.

Another American came by today.  Actually he and his girlfriend/wife (whichever she was) were standing in the rain under one umbrella so Lita and I invited them to stand under our overhang instead.  He didn’t say where he was from, but he was definitely American.  They were going to Catbalogan the next day and he wanted to know if I knew a good hotel there.  I couldn’t think of one off hand and there was still no electric, so I couldn’t go look one up for him.  That did get me to thinking though and if I ever get a printer, I’ve got an idea.  I ain’t sharing it yet though.  Whether it works out or not though, I will let y’all know at a later date. 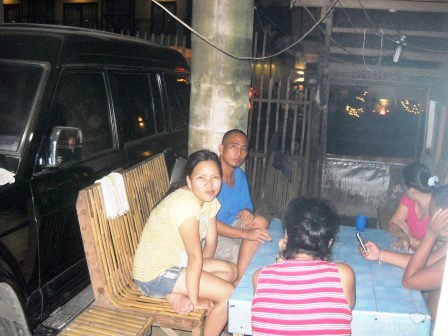 The power finally did come back on about 5:45pm.

I didn’t really take anymore notes for the day and I can’t even remember why.  Maybe it was just too boring.  I know I played a lot of cribbage solitaire that day and I finally did get a really good game of 119 points.

Useless Knowledge:  In 1996, former Beatle drummer Ringo Starr appeared in a Japanese advertisement for applesauce, which coincidentally is what his name means in Japanese.  (maybe it wasn’t such a coincidence, they could have planned that)