[smartads] Ifugao is a landlocked province of the Philippines in the Cordillera Administrative Region in Luzon. Covering a total land area of 262,820 hectares, the province of Ifugao is located in a mountainous region characterized by rugged terrain, river valleys, and massive forests. Its capital is Lagawe and borders Benguet to the west, Mountain Province to the north, Isabela to the east, and Nueva Vizcaya to the south.

It is named after the term “i-pugo” which means “i” (from/people) and “pugo” (hill), thus people of the hill.

The Banaue Ri ce Terraces is the main tourist attraction in the province. These 2000-year-old terraces were carved into the mountains, without the aid of machinery, to provide level steps where the natives can plant rice. 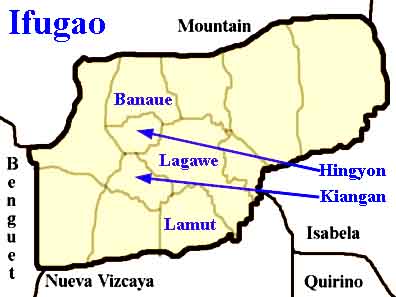 No hit count because of the brown out.  I woke up with Lita at 0357.  She was going to go downtown to the market, but decided it was too dark and she would wait another hour or so.  So we went back to sleep.  We got up again about 0515 and by 0526, she was on her way to the market in a pajak-pajak.

I stayed outside for awhile after she left because it is cooler out there early in the morning, than it is in the room, when there is no electric.  About 10 minutes after Lita left, Sally showed up for work and Vicky was about 10 minutes behind her.  They both live pretty close so they just walk to work.  I just stayed outside for awhile and stayed out of their way while they worked.  Normally I’m sleeping at that time of day anyway, so it was easy for them to ignore me. 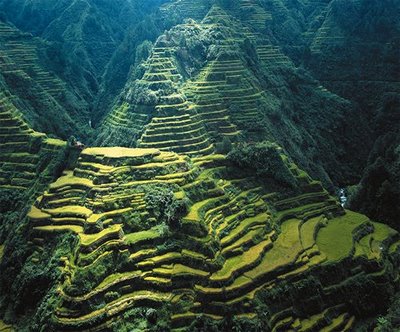 When Lita got home, we decided to go back to bed for a little while.  It was after midnight when we went to bed, so neither of us slept much.  It was still hot and muggy when we went back to bed, but at 0813 the electric finally came back on.  I was so happy that I laid in bed for another 3 hours.  When I got up, Lita was already up and moving around.  When I went out of the room, she asked me if I wanted some eggs to eat.  Sure.  I wanted to cook the eggs with onions and peppers, plus add in some Tabasco and A-1 steak sauce.  We got the eggs and cooked them outside in the dirty kitchen.  We used the left over Canola oil from the french fries yesterday.  After the onions and peppers got nice and brown, I added to eggs over the top of that and while it was cooking I put some Tabasco sauce in a plate with some A1 sauce around the side.  It was definitely not for someone who doesn’t eat hot and spicy.  I thought it was great and plan to use Tabasco with the BBQ sauce tomorrow to see how that turns out.  But I’ve used the A1 sauce on eggs before and I knew it was good before I did it.  Actually I think one of the things advertised for A1 sauce is eggs.  If you haven’t tried it, you should. 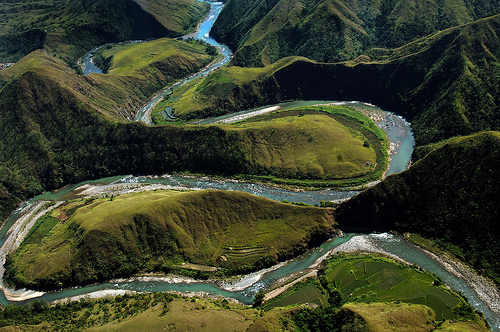 As I am writing these notes, it is only 2:32pm, so I haven’t been up very long, but I did just get back from the other sari-sari store.  I went by there to get some more water.  This morning they had the 1 liter bottles, but not the 1/2 liter.  I wanted to buy 1 1/2 liters, but settled for one 1 liter.  After I took a couple of swigs of the cool water, I felt so much better. 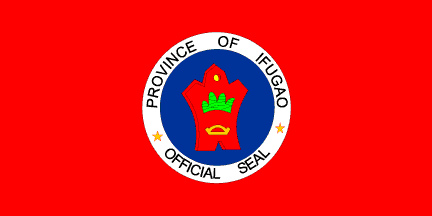 There were no new messages on the website and I’ll have to check but it seems that I am getting less and less traffic these days.  I still don’t know why I complain.  I’m still on track to get well over 1 million in a year.  Heck it probably will end up being around 2 million in a year’s time. 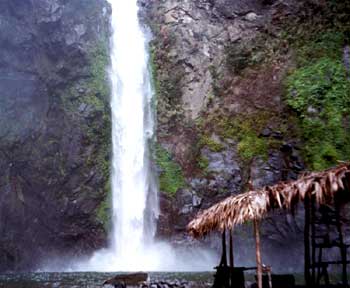 Wow!  It was a pretty boring day, but I’m trying to figure out something to keep y’all interested.

I did find out that was not Emei’s birthday yesterday.  It was his daughters birthday.  Today’s is Emei’s birthday.  He was feeling blue yesterday because he misses his daughter.  She still lives in Tambis and he continues to have to work here to make a living.  I believe all he has is a daughter and a son in Tambis, no wife.  Not sure if she is still around, but I’m thinking she either died or ran off.  I hate talking about it when I don’t really know any information, so I’ll just leave it at that. 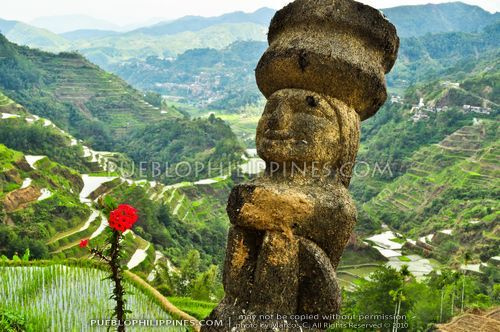 If I was a betting man, I’d bet that when we go to Tambis on 31 Oct, Emei will be going with us.  We only plan to stay for 2 nights, but that’s long enough for me.  I like to visit Tambis to see Khany and Bebie, but it’s more boring around there then it is here.  At one time I considered moving to the Tambis area, but I’m glad that never happened.  I’m sure I would not be worried about money, but talk about being bored to death, that would be me.  They probably have even less reliable Internet than they have here.  So I probably wouldn’t even be doing this blog.  I can see the entries now, “Almost bored to death today” and “Not quite as boring as yesterday”.  The people that live there that don’t have jobs, I swear I don’t see how they do it.  I’m sure there are many places like that in the Philippines, but I need someplace that has some excitement, sometime.  This is a good place for that.

Emei is sitting out front at the picnic table with Vicky, Sally and Jay, drinking tuba.  Tuba, besides being a musical instrument, is a locally made coconut wine.  It is very cheap to make and a lot of people like it.  It’s another thing that I have not tried.  I wanted to take bets on who would get drunk first, Vicky or Sally, but too many people wanted to bet on Vicky, so it wasn’t worth it. 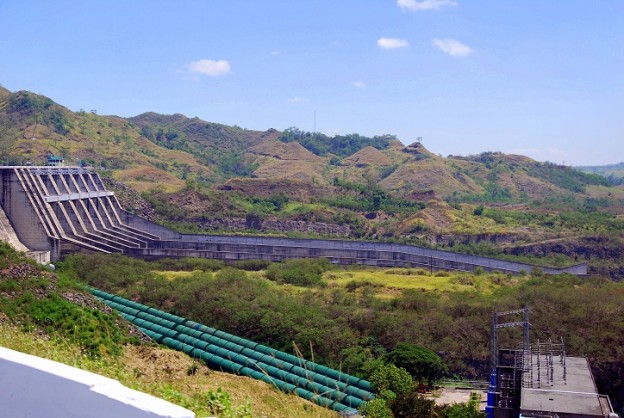 Lita stuck her head in the door and asked me if I wanted a Coke.  I said, “Sure, but do you think you could get a bottle of water also”?  I finally talked her into getting the Coke and the water.

When it got to 9:13pm, I hadn’t even starting typing the post yet.  I guess I should get started. If you are reading this, then I guess I did get started.  I’m going to take a quick look outside to see who is there.  I’ll say that Vicky and Sally are both gone by now.

Yeah they were both gone.  The only ones out there were Emei, Jay and Titing.  Titing wasn’t drinking, neither was Jay, but he was doing a lot of talking to Emei.  Jascyl was out there in the back of the Pepsi mobile.  She has been out there for about 2 1/2 hours with her boyfriend. 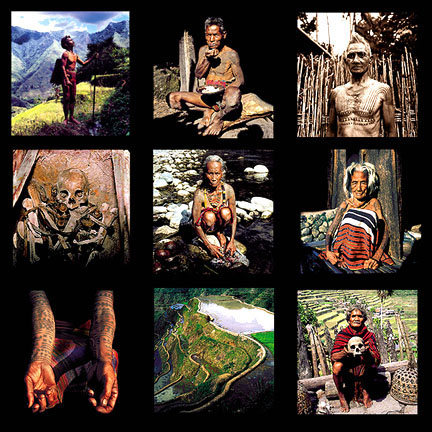 According to a comment I received from Qais, they are starting the do the ground work for the new Robinson Mall.  That makes me very happy.  Not only are they getting a mall here, which is the most important thing, but it is going to be at RFM which very close to our area, but not so close.  If they build the road from the main highway, Maharlika highway, going to the mall as I have heard, then that will work out well for our restaurant.  We just have to get in the position to open the restaurant.  It seems to be the only thing we know how to do that works.  If Judith moves over here at year’s end, than that just helps the success of the restaurant even more.  I will try to … uh oh, power flux … get progressive pictures of the building of the mall.  Maybe a once a week thing.  The Internet did not go out with that power flux, so I guess we can continue typing.

I mentioned to Titing about the mall and he says he didn’t know because he is basically stuck in the Pepsi warehouse all day.  I hope to get over there this weekend to take the first pictures.

Right about 9:45pm, they broke up the little drinking party outside.  After all, it is a working and school day tomorrow.

At 10:00pm I could hear that it was raining outside.  It was just barely loud enough to hear, so I went to the window in the dining area, to make sure.  Yep!  It was raining.  It didn’t last long though, only about 5 minutes.

I went in to watch the Biggest Loser, Pinoy Edition.  While I was watching those people run that course, it made me wish I was there doing it also.  I still think that if I ever get started at the exercising thing, I’m going to take advantage of that momentum and exercise as much as possible without burning myself out.  I know what I should do, it’s just the starting it that’s hard.

Well it is 11:22pm now, so I better wrap this up and get the pictures put in.  I hope everyone enjoyed the post for the evening and will be sure to let others know of how wonderful this blog is.

I put the wrong one in for yesterday.  It should have been this one, that’s why the date is 2 days off.

1907 – Gen. Macario Sakay y de Leon, one of the Filipino military leaders who continued fighting theimperialist United States following the spurious 1902 declaration of the supposed end of the bloody and protracted Philippine-American War (1899-1914), is hanged along with Col. Lucia de Vega by the colonial authorities under the Bald Eagle’s repressive and name-calling Bandolerism Actcharging all Filipino freedom-fighters as bandits, robbers, and ladrones; Sakay, who revived the anti-Spanish revolutionary movementKagalanggalangang Katipunan nang  manga Anak nang Bayan (KKK), operated in Luzon and established the Republika ng Katagalugan, had been deceived by the American Governor-General Henry Ide  into surrendering on promises of amnesty and the need to establish peace as prerequisite for eventual independence by way of acongress of elected Filipino representatives;earlier, the nefarious Americans murdered en masse 400 of followers of Gen. Sakay hanging and by lethal serum while in prison;  Sakay established and became President, with Francisco Carreon as Vice president, of the freedom-fighting or defiant “Republika ng Katagalugan” covering the whole of the Philippine archipelago in the declaration and which had its Katipunan-based flag, constitution and seal and which upheld the KKK character of the equality of every person regardless of race, skin color, wealth, intelligence and appearance as it exalts every individual’s ‘essential nature’ (loob) instead; Sakay proved to be thelast and apparently the greatest Filipino general that took on the  imperialist Bald Eagle that for a time could only vilify the sagacious and determined freedom fighting leader of the Katagalugan Republic who managed to expansively operate in the Southern Luzon areas despite the establishment of the terroristic concentration camps by the Americans through the colonialPhilippine Constabulary and Philippine Scouts.