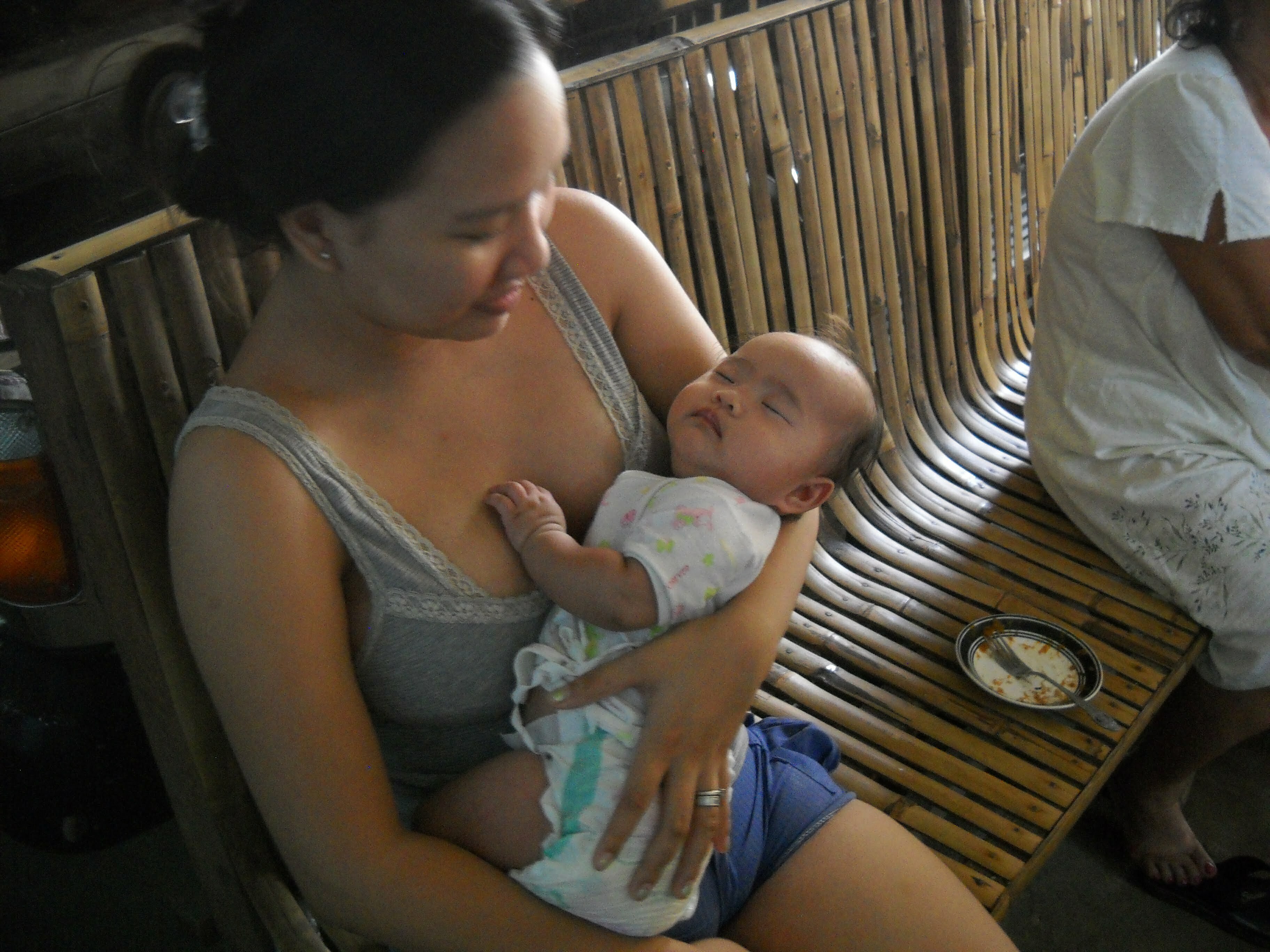 Juvic and her daughter Samantha

[smartads]  We are at the international airport in Manila waiting on our flight to Tacloban.  We have been here at Ninoy Aquino International Airport (NAIA) since arriving here last night via taxi from Clark Air Base in the Pampanga area.  It is now late the next afternoon and our flight is finally being called.  The flight to Tacloban was uneventful, in fact it was downright boring.  I’m glad it is less than 1 1/2 hours to complete the trip.  Maybe it’s just because I’m so anxious to get back home.

When we arrive in Tacloban it is raining pretty steady, but not so terrible.  The Airphil Express personnel are handing out umbrellas for use to the terminal because at the airport in Tacloban (the Daniel Z. Romualdez Airport) the planes park close to the terminal, but you have to walk on the flight line to get to the terminal.  Supposedly that the  new airport has finally been approved and hopefully, this time they will actually complete it.  The proposed new airport is the picture below and you can read a story about what’s going on here.   So as we are leaving the plane they hand Lita this brightly colored orange umbrella.  That’s fine, but when they try to hand one to me, I tell them that I’d rather get wet.  It wasn’t raining so hard that you would get too wet walking 50 feet or so to the shelter of the terminal overhang.  Besides, I’m not into carry umbrellas that are orange, unless it’s all that is available and it is really pouring down rain.  If it was pouring down rain and the umbrella was ‘pink‘, I would rather get soaked.  But that’s just me.

Inside the terminal we head to get our bags and have to ward of a slew of porters trying to get you to help let them help you with your luggage.  We only have small bags and we only checked in 2 of those (I wish the bag that had my deviled ham in it was one of them though) so we don’t really need help.  Besides, we figured that Jun and/or someone else was there to help us.  So I get the 2 bags and by the time we walk outside, it is raining like twice as hard.  We do spot Jun along with his 2 sons, Jason and Jhunnel.  They can get to us pretty easy and get the bags, but they decide to wait a few minutes to let the rain subside before heading to the van so our bags and Manang Loly (Lita) do not get too wet.  They collected all the umbrellas upon entry into the luggage area.

Finally we make our move and get to the van without incident or getting soaked.  We head for Jun’s house in Tacloban City.  We will be spending the night here and they will be taking us to the Grand Tour terminal in the morning for the beginning of our final leg of the trip (finally).

I don’t remember doing too much that evening, except going to bed and sleeping.  I’m not sure what Lita was doing, but she came to bed after I was already asleep.  You have to remember that up to this point, I have not slept much at all in the last couple of days.  Sleeping must have been a high priority with my mind.

The next morning we get up, have a nice little breakfast and start preparing to leave.  Jason would be driving with Jun and Luz riding along.  We were actually bringing Luz to work before going to Grand Tour.  It’s the first time we have seen the place where she works.  She supposedly and hopefully will be getting to go to Guam to work soon.

Tacloban City must be a bigger place than I know, because it took longer to get there then I figured.  While traveling through downtown, I get lost.  Not until I saw the McDonalds did I know that we were close to our destination.

At the terminal we unload all the baggage, said our good-byes to Jun and Jason, and while Lita watched the luggage, I went inside to get the tickets to Catbalogan.  The price of the tickets are P120 each and we just bought 3 seats.  One for me, one for Lita and one for our luggage.  I just thought it would be more wise to get the extra seat so we could be a little more comfortable and so no one would argue, since we paid for the seat.  I requested seats 3, 4 and 5 which is the second row, so we had to wait an extra van before leaving because the next van already had those seats sold.

When I got back, Lita decided to go to the CR and to roam around a little bit.  She came back with a dozen Dunkin’ Donuts doughnut holes to give out when we get back.  There was one guy there that was very persistent about selling his oranges.  He at first wanted to sell us 4 for P100, but eventually changed to 5 for P100.  We didn’t want any oranges, but we didn’t get rid of him until they finished loading our luggage into the van and they closed the door.

I keep saying that I’m going to remember to write down how long the trip from Tacloban to Catbalogan takes, but I wasn’t thinking about it at this time, so I still don’t know for sure, but I’m going to say about 2 1/2 hours.  Since I had the foresight enough to purchase a seat that is on the end of the row by the door, I could adjust my legs on a regular basis so I didn’t have stiff legs when we got there.

In Catbalogan I go inside to get the seats again, and again I get seats 3, 4 and 5.  Once again we have to wait an extra van.  The ticket price from there to Calbayog City is P100 per person.  We are not going to be riding all the way to the terminal because they will let us off right in front of our house when we get there.  Lita just tells them we want to get off at the Ciriaco and they all know where that is.  We are so looking forward to when we can just STOP!

Finally after what seemed like hours, but actually was only about 1 1/2 hours, we arrive back home.  Of course we get a warm welcome from all the relatives.  Most of them are there because they knew we were coming in because of the phone call to Titing the day before.

Not really to anyone’s surprise, but dismay, there was a brown out.  It seems that we also have arrived in between a series of heavy thunderstorms that have been going on for several days.  The storms have been the cause of the brown outs (as if we needed more).  I said, “Yep, we’re back”.  It didn’t take it long before it started pouring down rain again.  There is something else that I noticed immediately upon arriving too.  All is not how I pictured it would be or how I was told it would be before all this transformation around here started.  You will have to wait until the next post to find out what is in store for us now.

The Rainbow Bridge, connecting Tokyo’s Shibaura and the island of Odaiba, is completed.

Moldova declares independence from the USSR.

The British Broadcasting Corporation launches BBC Radio Five Live at 9am GMT with a mixture of sports, news, and children’s programming. The station broadcasts for eighteen hours per day.

An IRA bomb kills Lord Mountbatten and 3 others on holiday in Sligo, Republic of Ireland. Another near Warrenpoint, Northern Ireland kills 18 British soldiers.

The first installment of the Otoko wa Tsurai yo (It’s Tough Being a Man) movies is released in Japan. Director and screenplay writer Yoji Yamada went on to make 48 installments of the series, which is recognized in the Guinness Book of World Records as the longest running movie series.

The automobile division of Toyoda Automatic Loom Works is spun off into the Toyota Motor Corporation.

Anglo-Zanzibar War: the shortest war in world history (9:02 to 9:40) between the United Kingdom and Zanzibar.

The after effects caused by the Krakatau explosion in Indonesia kills 36,000 people.

1828 – The Russians defeat the Turks at Akhaltzikke.

Napoleon defeats the Austrians, Russians and Prussians at the Battle of Dresden

Julius Caesar lands in Britain for the first time.

Greco-Persian Wars: Persian forces led by Mardonius are routed by Pausanias, the Spartan commander of the Greek army in the Battle of Plataea. Along the with the Greek victory on the same day in the Battle of Mycale, the Persian invasion of Greece ended.