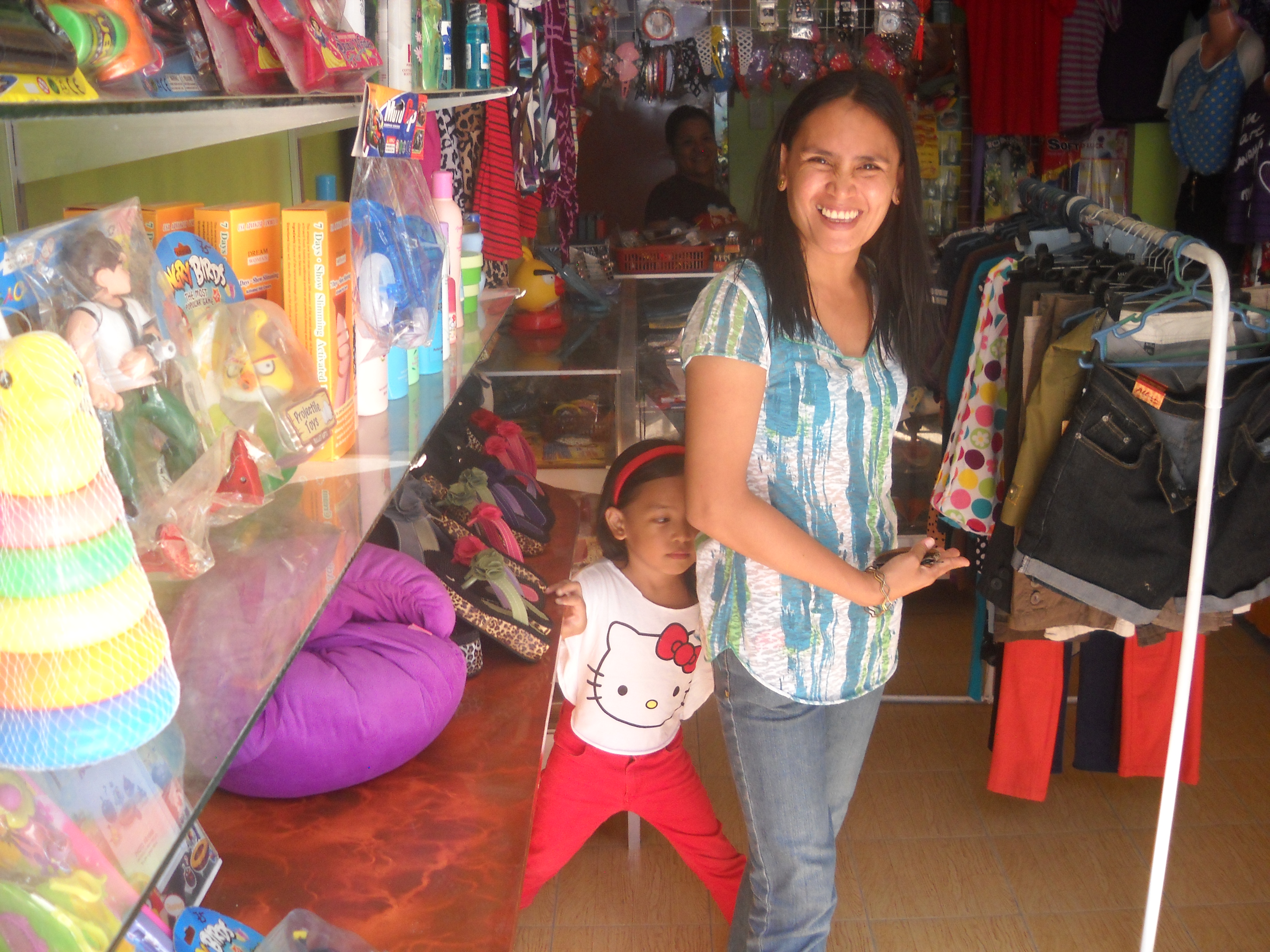 Robbie-Faye at boutique next door

Before I get started on Part 2, I would like to announce a hacking.  The very popular website Sulit.com has been hacked and your information could be compromised.  You can read further details at this site.

Here is a quick recap of what is going on here.  I bought some Philippine lottery tickets and actually matched 4 of 6 numbers on the Grand Lotto (6/55).  That is suppose to be a prize of P2000, but you are forbidden to make any marks on the lotto tickets and that is very strictly enforced here in the Philippines.  I circled my winning numbers.  Cashing the ticket turned into a big problem.  So yesterday Juvic was unable to cash in the tickets, she said because of the marks on the ticket.  I decided that the next day, today, that I would take the ticket down there myself and find out what is going on.

So I take a tricycle downtown to Magsaysay Blvd.  That is not where we bought the ticket but I knew they were there and I wanted to take a few more pictures while I was downtown.  I even remembered to bring the camera.  So I arrive there and there is only 1 person in line, so it was quick.  When I got up there the lady, who did not speak very good English, said that I could not cash the ticket in there because I did not buy the ticket there.  Say what?  It’s an international lottery right, so what’s the deal with that?  I am not sure of the Philippine lottery system, but I figure it is just that she doesn’t want to cash it because of the circles.    I didn’t argue, but I headed towards Mar’s house to ask them if they knew anything about that.

When I arrive I see Ludy and Marge right away.  I asked about the cashing in of the tickets and want the young lady told me about having to go to the place of purchase to redeem it.  They said they have not heard of that.  I told them what had transpired and they decided to help me solve my problem.  They did more than I figured they would do.  Marlou actually got on his motorcycle and went to try to cash the ticket for me.  As it turned out, they would not cash the ticket for him either.  I found out that the lady that I did buy the ticket from is the cousin of Ludy.  Ludy talked to her and the cousin suggested that I talk to a manager on Monday, it was Sunday, and ask him/her to accept the ticket and let it be cashed.  What I had a hard time understanding is that the ticket was run through the  computer and it validated as good, but they still would not cash it.  They must have been too afraid to cash it because I’m sure it has been repeated to them over and over again to not accept altered tickets.  I suppose that if it was determine as being invalid, and they were the ones that handed out the money, then they would be the ones responsible to pay the money back.

Time for the waiting game now.  I do not like to play that game with Lita when money is concerned.  She gets impatient and wants it resolved yesterday, if not sooner.  Of course we are about out of propane for our stove, and that cost about P900.  That P2000 would pay for that and a few groceries also, so I can kind of understand her concern.  Me?  Well I figured what’s done is done.  I can’t un-circle the numbers, so whatever happens, happens and we (especially me) learn from that mistake and move on.

The plan was to have Ado take the ticket to the office because when he goes to work in the early morning, he parks right by there waiting for customers in his multi-cab.  I don’t know what happen with that plan, but Cathy (Ado’s wife) ended up bringing the ticket there.

Just in case, I told everyone that if they needed to, just tell the supervisor that some ignorant American didn’t know better and circled the numbers, because he is use to doing that in America.  I am not sure if Cathy had to resort to that, but I am pretty sure she mentioned about me being an American.  I say that because the supervisor did cash the ticket for us, but he said that ‘be sure’ to tell me not to write on the tickets anymore.  Now that is something that all the cousins and Lita have drilled into my head already, so the extra reminder was not necessary.  It was expected, but not necessary.

I had the camera with me when I went downtown that day, but I was so frustrated that they would not cash the ticket, that I did not take any pictures.  That is until I got back home and found out that the gift shop next door has seriously upgraded.  They now have a small restaurant, a small boutique and an internet cafe.   So the pictures here today are from them, next door.