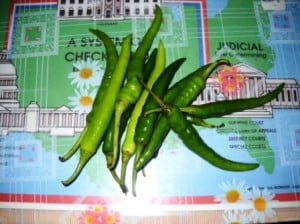 [smartads] Just a short little semi-interesting story to pass the time of day with.

Today was a bright sun shiny day so I went downtown with Lita in a motor.  We were heading to the open market, which I now hear is also referred to as a “wet” market by some.  We needed to buy several vegetables, including some hot peppers.  Lita decided on some peppers that I consider to be medium hot and we also bought some that are suppose to be hot.  I’ll use both of those, especially the hot.

We bought all the things from several different vendors, you know 1 thing here, 2 things there, 2 more things there…you get the picture.  All that meant was that we had about 7 different bags of vegetables.  Well Lita brought 1 large plastic bag (folded in her pocket) and we just put all the different little bags in the 1 large bag, which, of course, I had to carry, and it wasn’t exactly light either.

After we rode another motor home, we put all the vegetables away, but we ran into the mystery.  It seems that the “medium hot” peppers were no where to be found.  Lita and I searched for them in many different places that they could be and even a couple of places that they shouldn’t be.   Lita had already resigned to the fact that they were gone and decided that maybe she left them at the vendor, which she has done before.

I went back to my computer, where I do my best thinking, and I had a thought (unusual, but true).  I decided to look in the bottom of the bag that the extra long green beans came in.   The reason that thought came to me was that I remembered that we bought the green beans and ‘all’ the peppers from the same vendor.  She had a hard time putting the bulky green beans in the small sack she pulled out.  I didn’t watch her because I had moved to the vendor next door who was grinding the coconut meat out of the shell.  Anyway I looked in the bottom of the bag and I didn’t see any peppers, so I figured..oops I’m wrong, but I decided to pull the green beans out anyway, just in case.  When I pulled the green beans out, sure enough there they were, the peppers…mystery solved.

Both the green beans and the peppers are the same color, so when you just looked, it was difficult to distinguish between the two through the bag.  The lady at the market must have gotten a larger sack and just put them together.  The ‘hot’ peppers were in their own little sack because we bought them ‘after’ we got the kilo of coconut meat next door, so they were only witnesses to our little mystery, not suspects. 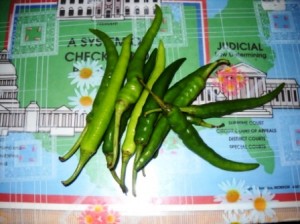