[smartads] I wonder if this underwater hotel was ever built in Palawan?  It’s an interesting concept.  It might be interesting, but I mostly hope it’d be safe.  I guess there would be extensive tests done before it was approved though.  I guess we’d have to have emergency scuba tanks in the rooms.

Useless Knowledge: Demand was great for I Love Lucy merchandise in the late 1950s. A Little Ricky doll debuted in stores, and its manufacturer couldn’t keep up with the thousands of reorders. Neither could an overworked furniture firm that sold an unprecedented 1 million I Love Lucy bedroom suites to the show’s fans in just 90 days.

Today I decided that I need to get out of this house and do something instead of just sitting around here all day.  I’m not sure what I’m going to do though.  HA!  No sooner did I have this written down on paper, then Lita came in and wanted me to go downtown.  She not going though, it’ll be just me and Crystal.  Crystal says she’ll go, but she needs to take a bath first.  Now I don’t know if it’s because she’s a Filipina, a girl or both, but she always takes a bath before she goes somewhere.  I wonder what she would do if she went downtown, came home and a half hour later was going back downtown again?  Would she take another bath?

Okay ignoring the time lapse, I’m back from downtown now.  While I was waiting in line at Metro Bank to use the ATM I met a Canadian dude.  We talked for awhile, but for some reason I didn’t get his name.  Oh well, he was a pleasant enough guy.  He is retired Navy and was there with his Filipina wife and they’ve been married for 11 years and had 2 children (and I think 1 in the oven).  I got all that information, but not his name.  Strange isn’t it?  Oh, and this was his 2nd marriage.  He was married for about 30 years the first time.  But no name.

Crystal and I walked around downtown.  I can’t do that with Lita, she gets too tired (she only has 1 lung).  Crystal and I were going to walk to Mercury Drug Store from JustMar, where we just finished shopping.  As we were coming out of JustMar there are the normal tricycle drivers trying to get your attention so you’ll ride with them.  I was telling them all no, we’re walking, but then I heard someone say, “John”.  Usually it’s “Hey Joe”, so I looked and it was Eddie.  Remember Eddie, Vicky’s husband?  I said, “Okay cool, we’ll ride with Eddie”.  He took us to Mercury and on the way home he stopped at Joy Palace for me so I could take the updated pictures.

The front faces and is right on the main highway.

That’s Eddie in the tricycle, waiting for me. 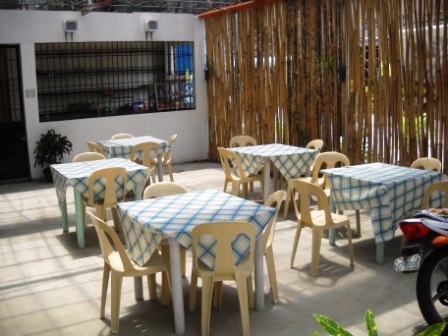 Before there was nothing here.

Useless Knowledge: Galileo became totally blind shortly before his death, probably because of the damage done to his eyes during his many years of looking at the Sun through a telescope. 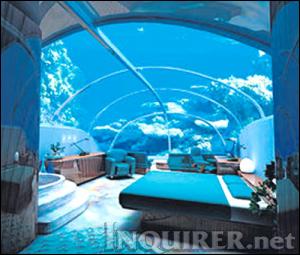 Next time I go downtown I’m going to try to go by the RFM area and get updated pictures of the new market and the surrounding buildings.  It’s been requested that I get those pictures, but I don’t get by that way much.  I could come that way when coming home from downtown, but it’s the long way and normally we don’t go that way.  I’ll have to make a special request or find a way to get myself there.

I hear Precious next door exercising her terrible two skills.  Recently she likes to cry and scream a lot, to try to get her way.  It’s the same way her sister Crystal was when she was that age.  I guess most children do that around then.  Something to look forward to when Casandra get to 2 years old.

It’s been raining on and off all day today.  No seriously hard rain though.  It rains just about enough to get the ground good and wet, then it stops.  After a while it will start raining again and it just repeats the process.  It’s done that 4 times today so far.

(This website didn’t look like it was kept up, but it had a lot of old pictures)

Since I like to wear shirts with no sleeves, Lita had me pick out several shirts that I wouldn’t mind having the sleeves cut out of.  I picked 6 of the 2X shirts that I have not worn in a few years.  I didn’t wear them because they got too small or I got too big.  Now that’s I’ve lost 70 pounds, they fit again.  I have so many of those 2X shirts.  Some of them still do not fit, depending on the brand.  I plan to lose another 70 pounds before I stop, so that should fix all those shirt problems.  I might create another problem.  Maybe all the shirts will be too big.  That’s a problem I can live with though.  I think I’d just wear my shirts a little big instead of buying all new ones.  It’d cost too much money to replace everything.  I guess I could buy a few at a time.  I’ve never had the problem of all my clothes being too big.  I still don’t, but I think it would be nice to be on that end of the spectrum for a change.

Lita is showing Robbie how to sew.  Robbie already knows how to do straight line sewing so Lita can skip the Sewing 101 and go straight to Sewing 201.  Tomorrow she will be teaching her how to put a zipper in.  Hey more power to her.  I’d probably sew my fingers together if I tried to use that machine.

Today I played the unlimited Survival mode in Plants vs. Zombies and I beat my record.  The record was surviving 24 attacks, but today I survived 26.  If I would have remembered my secret weapon at the end, I might have even made it to 27 or 28.  I’ll probably try again next week.  You’ve got to be in the mood to try that awesome attack.

For those of you that have been reading for awhile, I still have not beaten level 9 of Zuma either.  I try and try and try, but I can not do it.  Sometimes the first 2 or even 3 stages go by easily, but then I lose all 3 lives at stage 4.  I’ve only been to stage 5 once, with 1 life left, so I didn’t last long.  I’m not even sure if Level 9 is the final level.  If there is a harder one, I might as well forget it.

I had to move the electric fan back to it’s original position to my right, instead of behind me.  The computer was getting too hot because I was blocking all the air.  When it’s to the right some of the air hits it and keeps it just cool enough.  In this room it gets hot and the fan is necessary for both me and the computer.  I’m either in here or at least have the computer on most of the day, so the fan stays.  Probably next year I will buy another a/c and have it put in the window.  The a/c in the bedroom is not that powerful and it does not reach all the way in here very effectively.  Well that might end up making the electric bill too high.  Maybe I’ll just buy a stand by fan or alternate fans so one of them is not running all the time.

Lita bought a huge pineapple for only P50.  In Texas a pineapple of that size would cost $4 or $5.  Even for here, that’s a bit inexpensive.  I guess she got a good deal out of it.  I’m eating it while I’m taking these notes and it taste good to me.  I think I’m going to get some “Red Pepsi” to go with it…hang on.  (wait..wait..wait)  Okay, I’m back.  Ahhh!  Just want I need to go with this pineapple.

When I was outside I saw Sally grilling some fish.  It was tuna and it actually looked and smelled good.  I told Lita that I wanted to try some of it.  She is going to get me some here in a few minutes so I can give it a try.  I don’t know why don’t like fish, but I’ll try again to make a go of it.  I’ll keep you informed of the outcome.  I have some pineapple and , “Red Pepsi” to get rid of the taste if it still taste bad to me.

Okay, that was quick.  I tasted the tuna and I still don’t like it.  For some reason I don’t like seafood, except fried shrimp.  Yes that includes lobster and crab, I won’t eat those either.

Time to close this addition of Texan in the Philippines.  I hope that it was enjoyable for y’all and you are still reading to this word.  Or this one.  Thanks for being here and reading.  Please let me know of any suggestions you may have for improving this blog.

Useless Knowledge: Banging your head against a wall can burn up to 150 calories per hour.  (No wonder my son was so skinny when he was young)

1971 – Former Philippine President Carlos Garcia y Polistico is elected president of the 1971 Constitutional Convention assembled to revise the 1935 Philippine Charter during the second term of President Ferdinand Marcos y Edralin; Garcia, who served as the head of state of the Philippine Republic from 1957-1961, will die from heart attack within only three days from election as Con-Con head, permitting the constitutional body’s vice-president, former Philippine President Diosdado Macapagal y Pangan, to take charge of the writing of the country’s new charter; a lawyer, former law professor, congressman and three-time governor of Bohol, Garcia was elected Senator for three terms before running successfully for Vice-President and then for President in 1957; Garcia will be remembered for his administration’s near iconic legacy  of “Filipino First” policy which put the interests of the Filipino people above those of foreigners and of the ruling party.