[smartads] Introduction:  Today you will be getting a break from the province pictures.  I’d like for the blog to be with my pictures most of the time, but right now I don’t get out to take the pictures much.  Until we are better situated, I won’t be able to get out much to take those pictures.  I’m still working on adjusting to the Filipino way of life, even after 1 1/2 years.  I’m getting there, I’m just stubborn.

Please be sure to click on all the pictures to get further explanation about the picture. 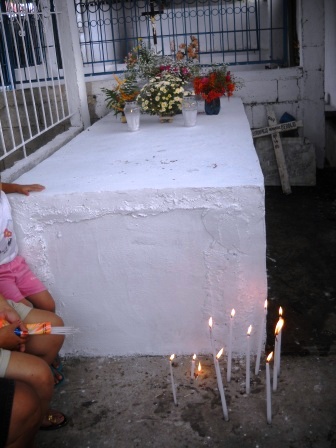 Back to Normal for Now:  Well all the festivities for the All Saints Day Week are finished.  I call it that because they start things up a couple of days before All Saints Day (Nov 1st) and they go a couple of days past also.  All of the cemetery visiting is done on the 1st and 2nd.  All the little food and drink stands have been taken down from across from the cemeteries and a nice view of the ocean is again visible.  Until the next holiday, official or unofficial, things will be flowing as normal around here.  I think the next big excitement that will be going on here is when Congressman Manny Pacquiao has his next bout.  The Ciriaco Hotel will be showing the fight and it will again be crowded with people.  I believe that the fight is on November 13th, which is a Sunday, so LolyKat will not be open.  They have snacks and drinks inside the Ciriaco during this event anyway. Last time they had the fight on TV there, it did not increase our business much at all and I don’t expect it to increase this time either, so we will not be open for that. 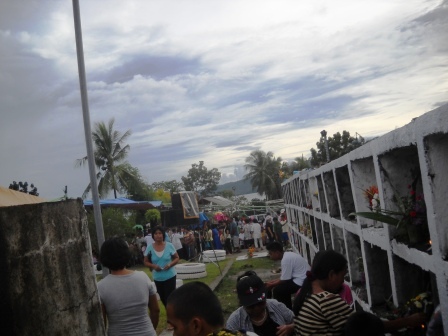 New Blogroll Site:  I added Life in the United States and the Philippines: 1960 to the Present.  I came across his website when I was viewing Dave’s blog and it was interesting so I thought I’d give y’all an opportunity to check it out.  The story on there about adding a 28th Amendment to the US Constitution was the story that most interested me.  I personally believe that if this Amendment was added and observed, then most of the financial problems in the US would be resolved. 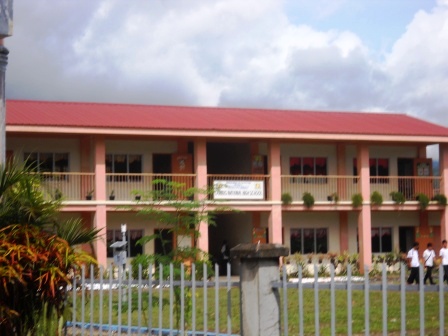 The above school is the one that the high school kids were at when the landslide in Guinsaugon happen.  They heard a loud rumble sound and ran outside to find that their whole village across the river was buried with tons of rocks and dirt. 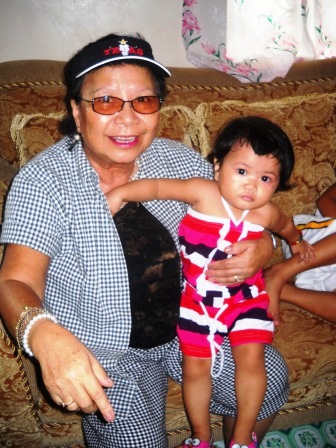 Proper Peanut Butter Cheese Money:  Yeah I know weird title, but it pretty much sums up this paragraph and it is an attention-getter. Lita and I went to Calbayog Proper (downtown) today and I withdrew the rest of our money, well at least the most I dared to withdraw.  I need to leave at least a few dollars in there.  Because Lita “had” to go to Tambis (she promised her ancestors she would if she was in the Philippines), we ended up a little short on paying things this month.  Of course that just means we will have penalties to pay next month and a little bit higher payments than normal.  On the bright side though, we did get 2 more of the smaller bills paid off and 2 more caught up.  We are down to only 8 bills left to pay (other than utilities), and 3 of those are not very much.  There are 3 high ones and the other 2 I consider to be medium amounts.  In December we won’t be able to do anything about those bills, but in January the 2 smaller ones will be paid and I’m going to pay down at least one of the medium ones to get it to the small category.  February should see both of the ‘now’ medium ones paid and some additional work on the last 3 high ones.  The only month I’m really worried about though is next month.  I’m glad that when Lita stopped by Robinson Mall on the way back that she bought a large jar of peanut butter and 2 packages of american cheese.  It looks like I will be having a lot of those 2 things until the beginning of January. 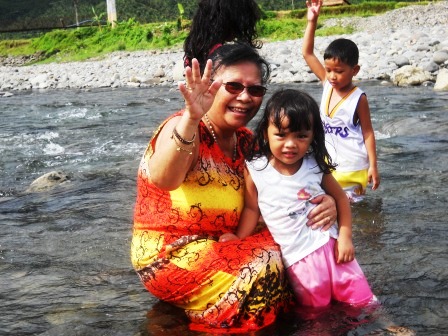 Chow King:  Even after all that trouble though, we did do our once a month outing to Chow King.  We only spent P349 for the both of us and even that turned out to be too much food.  It was one of their family meals with 3 pieces of chicken, chicken chop suey, rice, lumpia and 3 large Cokes.  I had 2 of the Cokes, I ate half the rice and I ate 2 pieces of the chicken, along with 1/2 of a lumpia.  The lumpia had pork in it, which is okay, but it had a weird taste, so I quit after I tried it twice (2 bites).  The chop suey I knew I wouldn’t eat because in addition to putting chicken in there, they also put chicken liver.  At least I think it’s chicken liver because it tastes like liver and I hate liver.  I would rather eat some of the fish instead of liver.  Lita liked the chop suey though and ate all of it.  She didn’t have room for her share of the rice or the final piece of chicken and we were thinking we would have to bring it home.  Right about then Robbie and Raven walked by in front of of the restaurant.  They went to the dentist office, but they were closed.  We called them in, let them eat the rest of the food while Robbie and Lita blah, blah, blahed.  Raven ate most of the chicken and all of the remaining rice.  Raven is Robbie and Ramil’s oldest child.  He is the one to the far right in video of the children singing the National Anthem. 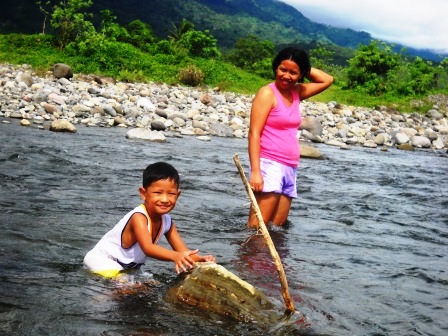 Famous Quotes:  “You cannot help men permanently by doing for them what they could and should do for themselves.”  —Abraham Lincoln

In laymen terms: Don’t give fish away to the poor, but instead give them a fishing pole and teach them how to fish. 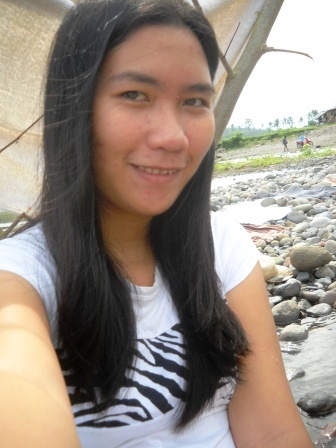 Lita’s Assessment of the Van Ride and the Nissan:  She didn’t like it.  She said that the driver must have driven  a rabbit bus in a previous life.  With just her and Grace in the seat, they were going from side to side at ever curve because the driver was going so fast.  Also the driver would not stop for her to go to the CR (restroom), and Lita needs to go to the CR a lot.  She said that she wants to go in the Nissan the next time we go to Tambis.  It will cost more because of the gas, but there is more room for everyone to stretch out, it has dual aircon (a/c) and the most important thing is we can stop anywhere she wants for her to go to the bathroom.  The little bit the truck has been used around here recently has been successful.  There have been no problems with it.  Titing took it to Malajog Beach with the whole crew just the other day, remember the day I was home alone.  I guess that our Nissan Patrol is ready for another long test run.  I hope it has better results than the first time, when the wheel fell off.  I think we won’t have anything to worry about and if I did, I wouldn’t go or let anyone else take it either. 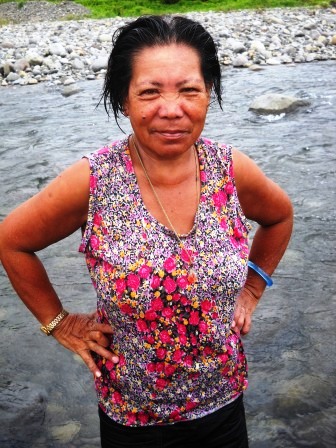 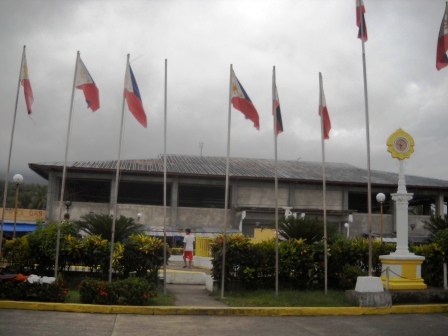 1900 – One year and nine months into the bloody and protracted  Philippine-American War (1899-1914), the  imperialist invading Americans close the port of  Boac for commerce; the Boac port was the  exclusive port utilized in the Marinduque area  in the Visayan Islands during the colonial  Spanish era. 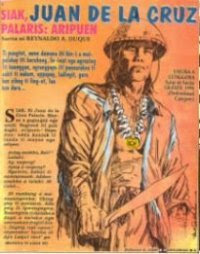 1762 – The Pangasinan Revolt led by Juan de la  Cruz Palaris erupts in Binalatongan during the  Spanish colonial rule of the Philippines; the uprising led by Palaris (born as Pantaleon Perez), which was  the second revolt in the province of Pangasinan  during the Spanish era that coincided with the  British invasion of the Philippines, would spread  to the towns of Mangaldan, Calasiao, Dagupan, San  Jacinto, Sta. Barbara, Manaoag, Bayambang,  Malasiqui, and Paniqui; however, with the  signing of the 1763 Treaty of Paris that ended the Seven-Year War between Spain and Britain,  along with the successful suppression of the  Silang Revolt in Ilocos, the colonial Spanish  authorities were able to concentrate on  Pangasinan, eventually quashing the rebellion  and soon executing the brave, anti-colonial Palaris by hanging.
Photo credit: http://mannurot.blogsome.com/category/critisismo/

1762 – Colonial British authorities proclaim  the granting  to Filipino residents of Manila of the  rights enjoyed by their other subjects, a month after the Spanish colonial authorities surrendered Manila to the British invaders; the  rights granted on the condition that Filipinos  renounce allegiance to Spanish colonial Simon  de Anda y Salazar include the free exercise of  Catholic Christianity and exemption from  tribute and forced labor;  two days earlier,  Dawsone Drake became the British governor of  the colony Philippines nearly a month after the  British forces successfully attacked and invaded  the Manila harbor areas of Tondo (Manila) and  Cavite as a development in the Seven Years War between Spain and Britain.

1841 – Filipino religious leader and martyr  Apolinario de la Cruz, also known as Hermano  Pule,  is executed by colonial Spanish  authorities; de la Cruz , whose dream of being  a priest was frustrated by the discriminatory  colonial policies of the Spanish friars, co-founded the brotherhood Cofradia de San  Jose that was initially a Catholic religious  brotherhood that swelled in membership; de la  Cruz’s execution came following a failed  rebellion as the religious group’s reaction to  friar attempts to suppress the Cofradia. 1901 – One year and none months into the  bloody and protractedPhilippine-American War  (1899-1914), the Bald Eagle invaders pass Sedition Law, Act No. 292 through the  imperialist body Philippine Commission; the  law, passed about half a year before the imperialist  United States President Theodore  Roosevelt will falsely  announce the official  end of the  “insurrection,” despite ongoing guerrilla  resistance warfare against the enemy American  invasion, was made in the bid to suppress agitations for independence in the still-limited  areas of American control  in the Southeast  Asian archipelago.
Photo credit: http://www.elaput.org/chrm1841.htm
Tags: Calbayog, CR, Filipino, Grace, Guinsaugon, Nissan, Philippines, Rabbit, Saints, Tambis
Tags: Calbayog CR Filipino Grace Guinsaugon Nissan Philippines Rabbit Saints Tambis