[smartads] This post will probably look more like the long posts that I was doing.  There is almost 5 pages of information.  Being so far behind though, I don’t know if any of it is repeated, but it shouldn’t be.  Get that CR break out of the way because here we go …

Khany, Khan and I went to Calbayog Proper today to a haircuts.  I did remember to bring the camera (yeah I know, it’s almost a miracle I remembered), and I did get 5 or 6 pictures, including (drum roll please) some newer pictures of the new wet market area and the area where the Robinson Mall will start being built.  It’s actually a big mess there right now, but I assume that sooner or later it will all be sorted out and will start looking good.  I forgot to take pictures of the buildings they are tearing down, but I now know where most of those businesses are being rebuilt and will be taking pictures of that area very soon.  It’s on the way downtown so it will be hard to forget, if I have the camera.  Here are 2 pictures.  The first is the new wet market and the 2nd is the new bus depot.  The one I have of where the mall will be built was off and is just a big pile of dirt. 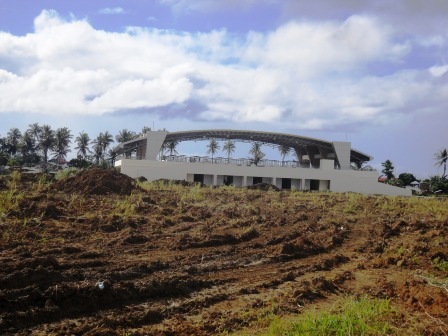 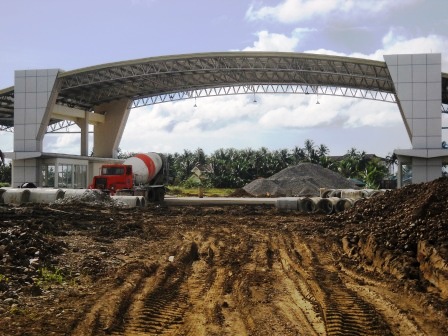 A long wait for not much wasn’t it?  Next week, if they actually are opening then, I should be able to get inside to take pictures of that wet market.

So for now, I’m back in LolyKat smelling something stinky that Ramil is cooking at the dirty kitchen.  Lita decided to go back to sleep.  It’s 10:30 and she has been up since about 0400.  I had to interrupt her just as she got laid down.  I needed her to watch the store a few minutes while I got 20 things of ice for a customer.  She didn’t mind doing it for that.  After she was up, she thought of something else to do.  She does that often.  Since she was already up, I sneaked into the kitchen and cooked some eggs with onions and peppers.  I was trying to make it hot so I used 10 of those little hot peppers and added a couple of dashes of Tabasco sauce.  I guess my taste buds for hot must be shot when the hot is mixed with food, because it was what I consider only a little warm.  Maybe it will be hotter later.  I hope not.

I’ve got a lot of thoughts buzzing around in my head.  Partly because there is a lot of empty space, but I’m been racking my brain trying to make this website make money.  I think I have a good idea, but it’s going to need information and a printer.  I’m going to look at prices of new printer/copy/scanner machine (fax too maybe) just to see if they can be in the budget after things settle down.  Maybe Mar can get me a surplus one from the University, if they have such things there, surplus I mean. 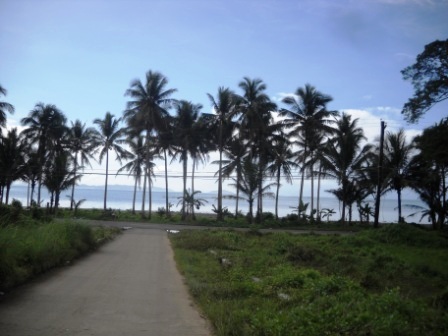 Although it is Saturday, the food is not being served today.  It will resume on Monday and run all week, but will be closed down again next weekend for the New Year festivities.

I need to remember to call Marcial’s Grille to find out there holiday hours for 1 Jan night.  It’s Lita’s birthday and I’m taking her there to eat.  We rarely go out to eat around here, mostly because of money, but also because there are not that many places I’ve been to that I care to frequent.  I hope this place will be different.  I’ve only heard good things about it, but I will be making my own critique after our visit.  I’m going to see about getting us a driver also.  Maybe Khany will still be here, he’d probably do it. 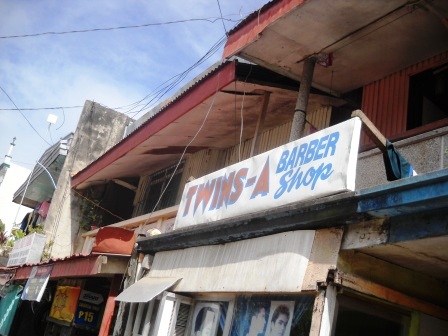 I just checked this website for the Marcial’s Grille and the link I had was not working.  I’ll have to go to the net, find it again to relink here.  I also need to get the phone number or go there in person and ask.  If they are not going to be open, it’s not big deal really.  We can do it the day before or the day after.  I would have to get a ride from someone else if I wait too long though.  I’m not sure when Khany is leaving.  December 30th is Jose Rizal Day, but I don’t think they would be closed for that.  Whatever, I’ll get her there between 30 Dec and 2 Jan.

Oh yeah, it’s raining.  That’s old news these days.  I haven’t been keeping track of the number of rain days this time, but we are for sure in double digits.

Well, well, well I finally got a good game on Triple Yahtzee.  A grand total of 2117.  I even had to mark out a small straight right there at the end, but I had 2 extra Yahtzee’s.  I’m almost out of pads too.  I use to make my own sheets when I had a good printer and extra reams of paper.  It was less expensive to buy the pads though.  Since, to the best of my knowledge, the pads are not readily available here, maybe I could revert back to making my own, if I had a printer.

It’s pretty slow out here in the store.  I guess I’d be using just as much electric in the house though, with no possibility of a sale, so I’ll stick it out here for a while longer.  I wonder what time Santa comes in the Philippines?  If he runs on Filipino time, he could be here tomorrow.

I just heard a squealing pig that someone just brought to the back.  I’m sure it won’t be squealing much longer, so I’ll stay up here and away from the back for awhile.  Although I know where the meat comes from, I’m not a big fan of the slaughter.  I’m not a big fan of pork either.  Besides, I like my meat fully processed with all the chemicals in it. 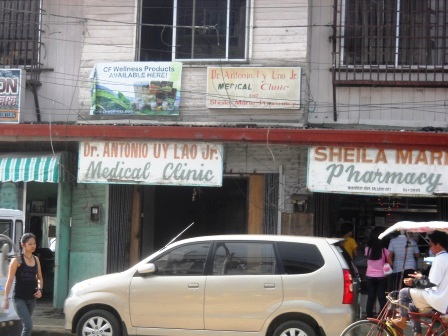 I’ve got a ride secured for taking Lita to dinner.  I just need the date and time now.  Khany said he would do it, just tell him when.  The ride coming back is also a bit fuzzy right now.  I’m not sure he understood me when I said we also needed a ride home.  I can work on that later.

I had to ask Titing about how to tell if a phone number is Globe, Smart, PLDT or whatever.  Because the way the stupid phone system is set up here, I’m scared to call someone next door without acquiring long distance charges.  I still need to call Marcial’s Grille to find out about their hours, if they have any, on January 1st (Lita’s birthday).  I e-mailed them, but I haven’t gotten a response yet and time is running out.

I’m sitting here stinking and thinking that if I had a laptop, I wouldn’t use so many notebooks to take notes for this blog.  After I get caught up, I can just type stuff in as it happens while in LolyKat.  Heck, I could be typing up the post for 28 Dec right now out in the store and come back in here to do this 24 Dec post.  That would really mess with my mind.

I asked Neneng if she had anymore 1.5 liter Mountain Dews in the warehouse and she said that the warehouse is empty.  Empty, I don’t think so.  I’ll check on it in a few minutes and bring the camera just in case.  A few minutes later ….    It wasn’t empty.  It even had some 1.5 liter Mountain Dews, but they were already sold and getting ready to be shipped out.  I think she just misunderstood what I said, or she was yanking my chain again.  She likes to do that at times. 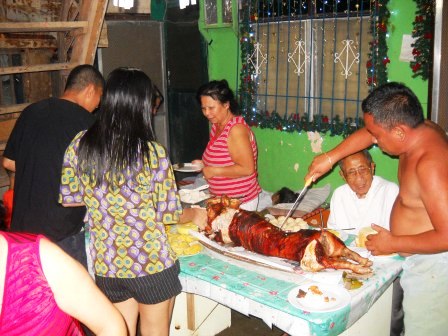 This evening we all went to Mar’s house to eat.  I wasn’t going to go, and didn’t at first, but Poppa was asking for me.  I wasn’t feeling so great, but since it was Poppa, I went.  I told Khany that I only changed my mind because he asked for me.  If Marge would have asked for me, I would have went also.  I don’t get to see Marge often.  I like her, she pretty and pretty smart.  She was there with her husband and new baby.  Marianne made some of those chicken rolls I like and there was also some of those small egg rolls filled with cheese.  Those things made up my whole meal because I had already eaten 2 bowls of soup at home.  I wasn’t expecting to go.

We got back home and all the kids were excited so they were making a lot of noise.  I did make an appearance outside, but I just seem to be getting sicker (physically).  I now have a fever and need a revolving door on the CR.

Okay, that’s the end of Christmas Eve.  I told you it would be longer.

Useless Knowledge:   Officials of Ancient Greece decreed that mollusk shells be used as ballots , because once a vote was scratched on the shell, it couldn’t be erased or altered.