[smartads] Of course this makes #12 of 80.  Sorry to be late on this post, but the computer died on me.  It was down Saturday night and it didn’t get repaired until Monday, just past noon.  I’ll have more details in another post.

Batangas is a first class province of the Philippines located on the southwestern part of Luzon in the CALABARZON region. Its capital is Batangas City and it is bordered by the provinces of Cavite and Laguna to the north and Quezon to the east. Across theVerde Island Passages to the south is the island of Mindoro and to the west lies the South China Sea. Poetically, Batangas is often referred to by its ancient name Kumintang.

Batangas is one of the most popular tourist destinations near Metro Manila. The province has many beaches and is famous for excellent diving spots including Anilao in Mabini, Matabungkay in Lian, Punta Fuego in Nasugbu, Calatagan and Laiya in San Juan.

Batangas is also where Taal Volcano, one of the Decade Volcanoes is located.

Useless Knowledge:  The world’s first electric traffic light signal was installed 75 years ago in Cleveland, Ohio, at the intersection of Euclid Avenue and East 105th St.

The tick tock read 0706 when I left the the sleeping dock.

Lita was driving me crazy looking the heating element that use to use with the charcoal.  It is broken and she says she wants to get Victor to fix it.  Actually he tried to fix it once before I think.  Since we didn’t bring it with us, I guess they are sold here.  I told her that we will just get a new one this coming payday.  Since we will be using more charcoal again than the gas it will be useful to intensify the heat.

I went out to put Mountain Dew in the cooler, there were only 3 of them left (2 after I got one).  Mountain Dew is by far our best seller as far as soft drinks go.

Precious came by the computer room, but it wasn’t to see me.  She wanted to listen to Wah-Wah again.  She had to listen twice today.

I made the mistake of walking outside and getting in Lita’s view.  When she saw me, she got tired and wanted me to sit in the store for a bit while she came in and took a nap.  It’s 0945 now and I told her that I’d be out there are 1000.  I was downloading a new version of Real Player and wanted to be sure it was completed first.

Okay, it’s 1002 and I’m in LolyKat.  I had to move that cat out of my way.  He was all spread out on the bench.  He sleeps most of the day and I assume is out tom-catting at night.

That young lady that ‘worked’ for Ramil and Robbie, her name, I think is Josa.  That’s what I think they are calling her anyway.  They like to use nicknames and shortcuts for names, but I think that’s it.  And you read that right, she no longer works for them, according to Lita.  She doesn’t work there but she is here most of the day playing with the kids and buddying around with Jascyl.

A guy came by looking for old broken jewelry to buy, but Lita says she doesn’t have any.  I think she does, but by the way she was acting and talking, I don’t think she trusts the guy that was buying it.  She says that he has been by a few times before.

Lita is a smart lady, but sometimes she thinks wrong.  For months I’ve been trying to get her to tell me why we are not using more charcoal instead of this gas.  She always told me that the charcoal was too expensive.  It turns out that is not exactly true.  While the price of charcoal did rise for a little while, it is back down now, but by my calculations, and it wasn’t hard, it’s still cheaper to use the charcoal.  All we need is a new heating element that intensifies the heat to make it burn hotter.  The one we have is broken.  Last I heard we had to get it fixed, but now I hear we could just buy a new one for P400 or P500.  Well buying one of those and a large bag of charcoal for P150 is a lot cheaper than spending P850 per month for the gas.  You only have to pay for that heating element once and then it’s only the charcoal.  Even when the price of the charcoal was up, it was only a little over P300.  I’m being sure we get another one of those things, this payday.  If we get another gas tank, we can use that for back up or at least use a lot less of it so it will last longer.  Every time we run out of the gas, Lita drives me crazy trying to figure out how we will get enough money to get a new tank.  Well that’s going to stop.  I’d still like to get an electric hot plate as a back up though, or so I can use it if they are cooking a lot of things and it will take a long time to finish.  Slowly but surely we will be bringing all the things together.  Some day it will all be like I dreamed of when we first planned to move here.

Lita asked Josa to get us some eggs from the other sari-sari store.  She said she would but it was too hot and she didn’t have an umbrella.  Lita let her use one and she went.  I offered to go instead, but Lita wanted her to go.  My goodness, it’s only about 80 degrees out there, what’s up with that.  I was wondering if she was being overly sensitive or was I being overly insensitive?  When Josa got back and went to close the umbrella, it broke.  Now if Lita would have let me go, then that umbrella would not be broken, not yet anyway.

With the eggs Josa brought back, Lita made us some egg sandwiches.  She said she wanted to give Vicky and Sally a sandwich also.  “Okay fine with me, but be sure to ask the first if they want one”, I said.  Lita said that they would not turn it down because they don’t normally get to eat eggs because they can’t afford them.  That’s how hard of a time some people have around here.  They can’t even afford to splurge for an egg sandwich.

It’s 2:25pm and I’m bored.  Not much to do out here except read, play that stupid game and take notes for the blog.  That’s why I usually have really long posts and sometimes even some left over stuff.  When I sit out here writing down every little thing that happens or I think about while sitting here.  Sometimes my imagination runs away with me.  If you read my other blog that I started:  http://stupidthoughtsonfacts.blogspot.com/, and the story about “Why a Fly Pesters You”, then you will know what I mean.

Blair and his future family are heading for the Marju Krisel to go swimming.  He said he would be by later tonight to get that cup of coffee.

The Marina at Anilao

I have seen several people walking by carrying roosters.  They were heading in the direction of the cockfight arena, so it must be Friday night and cockfight night.  I wonder if they still plan to tear that place down to make a road going to the RFM and the mall they are suppose to be building there.  If they do tear it down, will they build another one somewhere else for these people?

It’s 3:10pm now and time to enter the world of Bourne.

It’s 5:52 now and Lita is going to Monterrey to get me some peanut butter.  I have nothing left to eat because I won’t eat the fish, pig guts (chicken guts … whatever) or the stuff they sell that is pork, but it’s like the pig ears.  People here like it I guess because it’s cheap.  It must be an acquired taste.  I could make some stew, but the hot plate we borrowed from Robbie is too slow and it would be close to 10:00pm before it got done.  If I want stew tomorrow, I’ll just start it about 3:00pm and it will be ready by 6:00pm.

Useless Knowledge:  The exalted pharaoh Ramses II fathered over 160 kids. To immortalize this achievement, the Ramses brand of condoms bears his name.

It’s 8:42pm now.  I’ve been in the computer room for about 2 1/2 hours.  I stopped to eat 4 peanut butter sandwiches.  I killed a lot of terrorists today, but no zombies.

Blair never did show up for that cup of coffee, but it’s okay.  He can stop by anytime he is around, and he knows it, don’t you Blair.  In fact, any of y’all in the area, stop by.  Let me know you read this in the blog and I’ll get you a free drink.

I didn’t note the time, but that little Mano Po girl came by again tonight.  This time she didn’t avert her eyes to the candy. 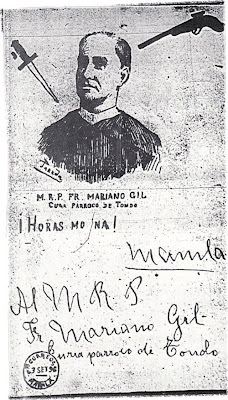 1896 – The Philippine revolutionary movement is prematurely discovered by the Spaniards when the hated Fr. Mariano Gil, the  curate of Tondo who has heard about it through a confession from a Filipino traitor (if s/he was not coerced to confess),  breaks his vow of silence and reports about its existence and headquarters to the colonial authorities; in response to the  mounting cruelty inflicted by the Spaniards on  members of the secret revolutionary societyKataastaasang, Kagalanggalangang Katipunan nang  manga Anak nang Bayan (KKK) who have been arbitrarily arrested  and imprisoned, Supremo Andres Bonifacio y de Castro instructs messengers  to summon his leaders to a general assembly to discuss measures  to counter the development; later, a Katipunan poster threatening the killing of the abusive Fr. Mariano Gil would appear on the poster of the Tondo church.

1939 –  On his 61st birthday, Manuel L. Quezon, President of the  American-sponsored Commonwealth government of the  Philippines, issues Executive Order No. 217 that prescribes a  16-point code of ethics to be taught in all schools in the  Southeast Asian archipelago.