[smartads] I sure hope that everyone survived the first of 3 Friday the 13th this year without a major incident.  Have your lucky charms ready for April and July of this year also because there will be Friday the 13th’s doing those months also.

All the pictures today are updated pictures of the Ciriaco Hotel and the resort part of the hotel they are working on.  I personally thought that when I went back there to check on the progress, that more if it would be finished, but it seems that it is hardly even started except for the clearing of the area.  I’ll have more on all this later in this post.

At 0747 I got up and decided to stay up.  We are not opening the store today so Vicky can finish washing our backlog of clothes.  Once she gets caught up, it shouldn’t be so bad.  If we would have been able to hire someone to wash clothes, it wouldn’t be so bad either.  On Monday we will start afresh and hopefully just move on.  I’m still hoping for the bakery to begin construction, but it is dependent on us selling one of our trucks.  Titing is looking, but as of yet, he hasn’t informed me of any buyers.  In the meantime, I will do my best to put up with this Sari-sari store.  Lita likes having the store, so that’s the only reason why I even consider enduring it. 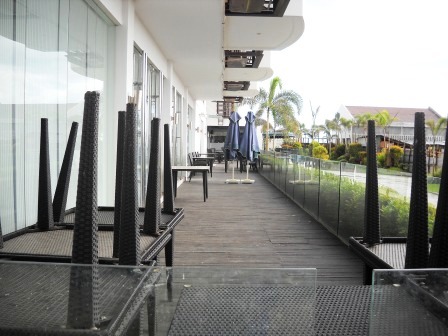 The Ciriaco Hotel Back Patio

It’s still 2 1/2 weeks until our first payday that we will be paying no more overdue bills.  Everything is caught up and easier to manage now.  Of course it’d be best to not have any bills at all.  That is my next task to work on.  I’m going to work on them little by little until they are eliminated.  Then, and only then, will we finally be free to travel to different areas of the Philippines, the rest of the Far East, Europe and North America.  That’s the only places we are interested in traveling to, oh and Australia also.

It’s a nice looking day this Saturday morning.  The sun is shining, but it ain’t fooling me.  I know it’s going to rain later.  I think it’s a given thing around here these days.  I do enjoy the sunshine while it is here though.

Well I have now had 4 cups of coffee in 4 days.  Y’all don’t worry, I’ll stop talking about how many cups of coffee I’ve had soon.  It’s just new for now and I’m getting it out of my system. 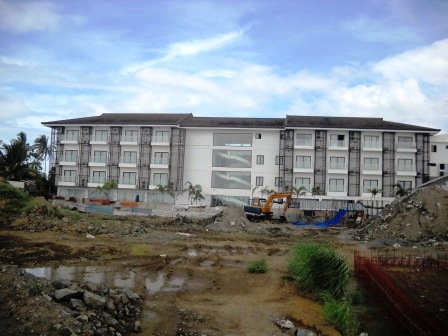 Something that I don’t understand that goes on here, well one of a few things, is when someone hails a tricycle, and there is only room for about 3 people, why do 6 or 7 people have to squeeze in there?  There are tricycles and pajak-pajaks galore around here.  Why can’t they just wait another minute or so and get on one that isn’t so crowded?  I bring this up because it just happen outside in front of LolyKat and one of the passengers was a big American.  He ended up getting in the front, but the other 5 people squeezed into the 3 person space in the back.  There were 4 people up front, including the American and the driver.  Just wait a minute or so.  I know that I always just get on the tricycles that have an empty place up front when I travel alone.  When I’m with Lita I will get in the back with her.  When I’m alone, if it starts getting crowded in the front where I’m sitting (it hasn’t yet), I will get out and walk the rest of the way.  If it’s raining I would still get out and just hail another tricycle or pajak-pajak.  Sure it would cost me another P5 or P8, but my comfort is worth a lot more to me.  Besides, as I said, it hasn’t happen yet.  Probably because most people here are reluctant to impose on the American. 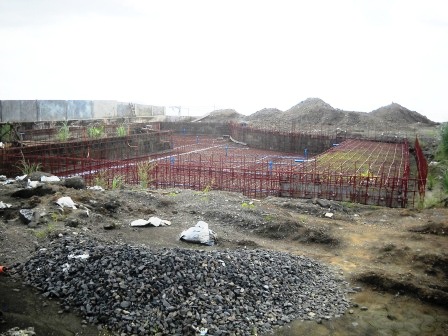 Lita is feeling sickly again today.  She thinks it some rice cake she ate yesterday.  She wants to be in bed and she wants to be up doing something, so she is going back and forth.  She sent Jay to buy some Red Pepsi and I’m drinking some right now.  It’s been a couple of months since I’ve had any, Red Pepsi that is.

A couple of guys selling onions and garlic came by.  Lita likes buying from these 2 guys because they are easy to haggle with.  She also buys kalamansi from them when they have that.  In fact she asked about it today and they will try to bring some by another day.  They wanted P70 per kilo for the garlic and onions, but Lita talked them down to P60.  She says she has to spend P70 at the market, so she likes this better.  We bought 1 kilo of each one because we do use a lot of those here, but also because she will sell some of it and make at least double her money back.

Okay back to the big mess behind the Ciriaco.  According to the Security Guard (who didn’t speak very good English) all the construction will be finished by the middle of next year.  I guess that the story I read about them speeding up the construction must be true then, because they haven’t completed much at all as far as I could see.  That same Security Guard told also told me that there will be another building built next to the hotel that will be part of the hotel.  He also said that it would be for additional parking.  I’m thinking that maybe something got lost in translation there, so he was probably saying it would be a building that has additional parking.  Maybe a covered garage area?  I don’t know for sure, I’m just trying to figure out what he was talking about.  Whatever the case, the Ciriaco will have something additional next to it. 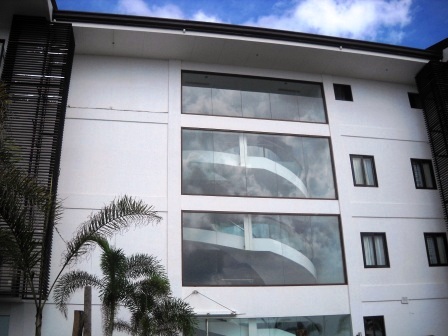 They have been having a lot of functions over there, especially weddings, including one right now.  If they do get everything done, then they should be raking in big bucks.  Also any business that pops up close to them should also benefit from their good fortune.  That is a good thing for us if we can get the bakery and/or restaurant open.  Of course I can’t do anything until we get the money to do it.   You usually need money to make money.

We sold our generator to Titing.  He wanted one for the warehouse and we never use ours anymore.  It was just sitting there getting rusty.  Lita thinks that that generator was too loud anyway.  She never liked it when we had to use it.  If we ever do get another generator, it will be one of the more expensive, more quiet ones.  It will also have to be more powerful.  It’s not on my “important things to do list” though.  It can wait.

Lita, Vicky and Cathy all went downtown together.  About 1/2 hour later, Vicky & Cathy returned.  Lita is shopping for the store and hopefully a little bit for me too.  It’s been about and hour and 15 minutes, so she should be arriving pretty soon.  She didn’t bring the list I made for her with her.  I’m looking at it now.  I hope she gets only the important things.

About 5 minutes later, here she is.  She did pretty good for not having the list, but she did forget a couple of important things and only bought 1 thing that wasn’t on the list.   She did get some peanut butter and coffee though, which is good because, get out your heart medicine, I had a second cup of coffee today.  Am I addicted yet? 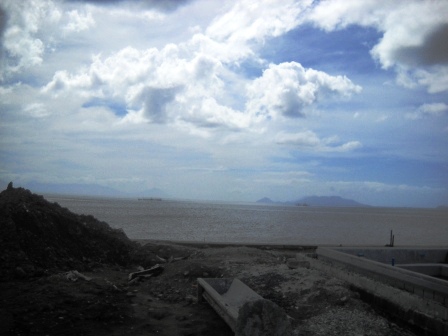 View of Ocean from behind Ciriaco Hotel

For some reason we seem to be running low on cucumbers and tomatoes.  Must be because we don’t go a day without having some of those sandwiches.  I’m going to buy a jar of mayonnaise next pay day.  I think all they have around here is Lady’s Choice brand.  Maybe I’ll look for a different, more recognizable brand when we are in Cebu in early February.

Even though we do have more things in LolyKat, we closed early.  No one felt like sitting out there tonight.  Actually I would have done it, but I haven’t been on the computer much today and I wanted to get caught up on things.

I did add a new sub-page under MJ Services.  It’s the  Cebu-Bohol-Boracay Package.  It explains what our vacation package consists of.  I also put the same thing in as a post.  I figure long after the post is out of site, out of mind, the page will still be there.  Check it out, see what you think.  Comments are always welcomed, you should know that by now if you have been following for any amount of time.

I see that they have a new shuttle service, beginning tomorrow (Jan 15th), from the Ciriaco to downtown and vice versa.  You only save P8 by not taking a tricycle, but the option seems to be there.  I say seems because although it doesn’t say that you have to be a guest at the hotel, it’s possible that you do have to be.  That’s something that I will have to check on.  I did put the schedule on this blog and on the Calbayog Corner website also.

Quiz Answers for 13 Jan in Green.

Filipino:  Macario Sakay was seen merely as a bandit by the Americans, but documents prove that he had the necessary concept of the Filipino nation to merit being a genuine military leader.

In 1902, General Macario Sakay, a veteran Katipunan member, established his own Tagalog Republic (Tagalog: Repúbliká ng̃ Katagalugan), and held the presidency with Francisco Carreón as vice president. In April 1904, Sakay issued a manifesto declaring Filipino right to self-determination at a time when support for independence was considered a crime by the American occupation forces in the Philippines.

Texas: 1845.  In 1836 Texas gained it’s independence from Mexico.  In 1862 Texas seceded to join the Confederacy and in 1870 it was readmitted after the Civil War.  “In February 1845, Texas approved the resolution to enter the Union. Part of  that resolution, which came to be known as the Constitution of 1845, stated that Texas would retain its right to divide into four states in addition to the original Texas. Although most Texans can’t imagine splitting up the Lone Star State, the legal right to do so still remains!”  The US Congress passed a resolution offering statehood to the Republic of Texas on 3/1/1845.  Approved by Texas Congress on 6/19/1845.  The Convention of 1845 met, accepted statehood, and wrote the Constitution of 1845.  The federal resolution contains the Texas one-time-option of dividing, not any Texas document.

Filipino:  This island is about 315 kilometers soth of Manila and is part of the province of Aklan.  It is a favorite tourist destination of both locals and foreigners.  Which island is it?

Texas:  Lt. Colonel Travis sent messages requesting help from both Texas and the United States.  On March 1st 32 men from this town arrived under the cover of darkness to help in the defense of the Alamo.  Which town was it?

Useless Knowledge:  Lotteries are not new. The original thirteen colonies of the United States were financed with the help of lottery dollars. Additionally, the U.S. government used lotteries to raise money to help defray the costs of the Revolutionary War and Civil Wars.