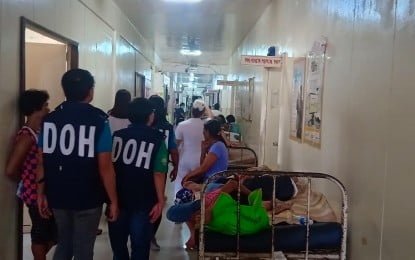 TACLOBAN CITY — The province of Samar is now under a state of calamity as dengue cases continue to surge despite massive efforts to contain the mosquito-borne illness.

In a special session Saturday afternoon, the provincial board approved the resolution to put the entire province under a state of calamity as local health authorities recorded 1,855 cases from January to July this year.

This is nearly double than the 653 dengue cases recorded in 2018.

Data shows that Calbayog City has the most number of dengue cases with 461 or an increase of 83 percent from 2018. The city recorded one death.

Catbalogan, the capital city of Samar, ranks second with 340 cases and one death. This is 254 percent higher than the 96 dengue cases reported in the same period last year.

“The foregoing alarming figures command the urgent action from the province to mitigate, control and eventually eliminate dengue infection. Thus, the need to declare the entire province of Samar under a state of calamity to mobilize all concerned and take necessary steps to obtain our objective of eliminating dengue infection,” the resolution reads.

Samar is the third province in Eastern Visayas placed under a state of calamity, after Leyte and Eastern Samar.