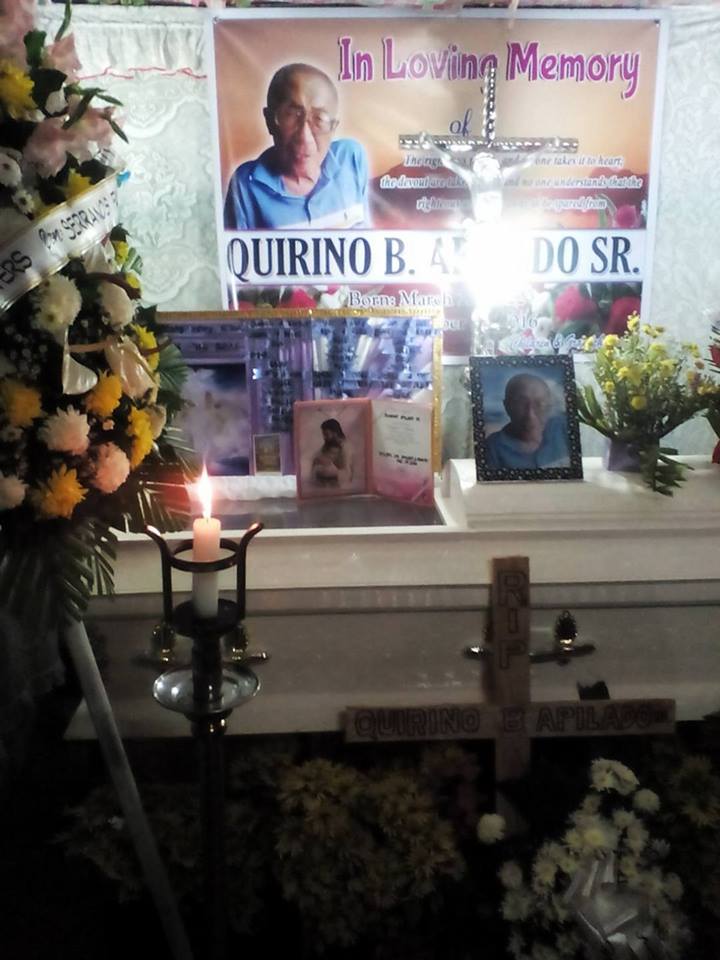 Recently I attended the funeral of a great man, my wife’s uncle Quirino B. Apilado Sr.  Although he lived to be 94, and almost 95, it was still sad that he passed.  This was the first funeral I attended in the Philippines and some of the customs took me by surprise.  I decided to look up these customs and compare them to what I actually experienced.  It seems that many superstitions are intertwined among cultures.  Our relatives, being from and living in different areas, have adopted some of these different rituals.  There are so many of these that I seriously doubt anyone will follow them all or even know about them all.  It seems that Filipinos just pick and choose whatever customs they want for their family members.

The Ilocanos break a plate as an offering to the dead.

They did do this at his funeral.  It is considered as an offering to the departed.  I wish someone would have mentioned this custom to me.  I was right next to the plate when it was smashed.  It was a heavy ceramic plate and part of the broken plate hit my leg.  Another inch or two closer and it would have probably drawn blood.

Food from the wake should not be brought home because it’s believed that the dead touches all of it.

I was told this.  All the food had to be eaten. Most of the food for the wake was just like peanuts and other mixtures like that. Simple food.  There was also a lot of soft drinks and beer.

Superstitions in Davao City include cutting rosaries that are placed within the hands of the departed (to sever the possibility of having a series of deaths), placement of a chick on the coffin during wakes, preventing teardrops from reaching coffins (in case of brutal deaths), breaking plates prior to taking the coffin out of any edifice, making children walk under a hoisted coffin before loading the latter into the hearse, and smoking feet with smoke coming from burning dried leaves or paper when leaving the burial ground.

This one covers 3 of the things that happen for the funeral I was at.  I already talked about the plate.  The children, mostly his great grandchildren, squatted under the coffin as it was brought out of the house.  Some of his grandchildren were under there too, mostly to hold up some of the great grandchildren.  This is done so the ghost of the dead won’t visit the little kids. Another reasons is because it symbolizes “burying” the kids’ sickness along with the dead.  I have no idea what they are talking about “smoking feet”, but before we left the cemetery, they had a little fire going out front.  The only thing I saw them put in the fire was wrappers from the food they were eating because, as stated above, you have to eat it all and nothing is allowed to bring home from the cemetery.  I’m not sure of anything else they burned though.

The female relatives of the deceased wear either black or white, while the male relatives wear a black band around their upper arm to show their sorrow.

For us they had both male and female wear a white shirt.  Nothing black was mentioned to me, although I did have on black shorts.

A Filipino wake is not designed to be short or quick as most of them last at least 5 to 7 days. Respect for the dead is displayed through an out pouring of love and the obedience of rituals. The length of the wake is in part to allow visiting family members enough time to journey home for the final farewell. The notice of death is spread by word of mouth or through obituaries, so it can take time for all their family members to arrive.

Poppa died on 18 Dec and his burial was on 24 Dec.  He had many, many people show up for his wake and even more for the church service before the funeral. He was a very respected man of the community.

Since respect is such an integral part of Filipino funeral traditions, it is common for friends of the deceased to give money to the family of the dead. This is viewed as a way to console and allows the family greater financial ease when it comes to hosting the vigil until the day of the burial.

They did have this and it will be explain better in a couple more paragraphs.

Before a man comes home from a funeral he should light a cigarette from a fire at the cemetery gate to shake off spirits of the dead.

I didn’t see anyone do this, but it’s entirely possible it happened.  I mean they did have the little fire and there were several men there that are smokers.

Most Filipinos aren’t rich; all guests are strongly encouraged to leave a donation in the abuloy box to help the surviving family defray funeral expenses.

For us they had a little stand by the doorway with a container on it.  People would donate whatever they wanted/could and they would write their names on the log with the donation amount.  It’s not a very rich area of the Philippines, but whatever was donated was used for the wake.

The morning of the funeral my family dressed in white, which is the color of mourning in some East Asian cultures. The family also wore black rectangular pins indicating that we were a part of the family in mourning.

This is more like what we did.  We wore the white and the little black rectangular pins were given out.  I didn’t get a pin, but almost everyone else had one.

Many kinds of activities are done outside or near the vigil area such as gambling (commonly card games or mah jong), guitar playing, playing board games, or any other things in order to pass the time and to keep people awake all throughout the night. Gambling is normally allowed and the players need to give some donations (tong) to the donation box.

This one for sure was done.  There was lots of gambling, eating, drinking, laughing and even some singing.  I noticed that the name of the donation box is different in this culture, but it all goes to the family of the deceased to curtail the cost of the wake/funeral.

Another thing to note that in a Catholic tradition, that the 40th day after death is essential for we believe that the soul of the dead traverses the heavens and joins God after wandering on earth for 40 days. It is on that day that family, friends, and relatives all gather together again to offer some prayers to the dead and celebrate by sharing the meal together.

My wife tells me that this is one that their family observes.  I’m not sure all of them know why they do this, but it’s a custom, so they will do it.

After the funeral, food must all be consumed and there should be no left-overs. It’s either you give it to your visitors or to your neighbors. However, there’s also this belief that one should never bring food that came from the funeral to his house.

As I explained earlier, they were eating the last of the food at the cemetery, none was suppose to be brought home.

Christian Filipinos customarily remember, honor and pay respect to the dead on All Saints Day (November 1) and All Souls Day (November 2).  The grave sites are cleaned, visited and adorned by family members, relatives and friends on the eve of November 1, to stay at the cemetery, to light candles, to pray, tolay flowers and bring food fro the consumption of the attendes.  Others, like the Ilocano’s offer food for the dead.  Some children habitually gather candle wax during this time for the purpose of play or reselling to candle makers.

This is something that I think ALL Filipinos do, regardless of what area they are from.  Traveling near cemeteries on these days will be slow going. Maybe they perform different rituals at the cemetery, but they all seem to be there.

So as you can see, many customs intertwined depending on what you want to do I guess.  These are just the superstitions for a funeral.  There are hundreds, maybe thousands of other superstitions for other things in the Philippines and other Asian countries.  I suppose all countries have their superstitions, but Asia seems to have more of them.

Poppa was a wonderful man in my eyes.  I learned many things from him about WWII and things about life.  He was a teacher in his younger days and spoke very good English so it was easy to communicate with him (when he could still hear good). I’m going to miss him and my time with him for sure.